Leaning Over The Woks 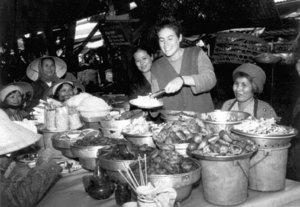 Kim Indresano, in action in Dalat 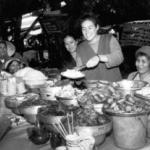 The height of the monsoon season chaperoned my first visit to Vietnam in October of 1992. For me it was part of a larger solo journey through Southeast Asia during eight and a half months. I arrived in Vietnam in the fifth month, by which point I was accustomed to getting around alone and creatively communicating when my foreign language resources failed me. I felt I had cultivated a heightened sense of intuition which fed my self-reliance while exploring a part of the world where women are quite safe to travel alone. In Vietnam, I sought an adventure and a chance to meet some of the local people, and perhaps experience something entirely different from what mass media and history textbooks offered.

I had one such memorable adventure in a small town called Dalat. Northeast of Ho Chi Minh City, Dalat is reachable by public bus in about seven hours depending on the season and the road conditions. Like a miniature Parisian quarter surrounded by waterfalls and remote walking paths, it is easy to see why Dalat is a vacation spot for many Vietnamese honeymooners. Winding cobblestone streets are lined with cozy dark cafes, where coffee is prepared with a thick layer of sweetened condensed milk, and is always served with a pot of tea to be drunk afterward. In one such cafe, I arrived out of the rain, my hooded plastic poncho dripping wet. The gentleman proprietor (and poet and painter as I was to learn) led me to a small wooden table by the steamy picture window overlooking the market below. He hung my poncho and dragged a coal brazier to my feet and draped a blanket over my shoulders. We chatted in French, his accent was charming, and he invited me to join him and his wife for dinner later that evening in the tiny cafe which was also their home.

For a week I wandered hilly Dalat on foot, constantly responding to chimes of "Hello, Madame." Older Vietnamese men rode no-speed bicycles and wore long, dark trench coats and black berets, each carrying a small baguette of bread under one arm. Amidst the crowded activity on the sidewalks, people literally stopped what they were doing in order to watch me pass.

One afternoon a Vietnamese family invited me to accompany them for a tour of Dalat's outskirts via horse-drawn cart. Coincidentally I had spent some time with these people in Ho Chi Minh City when I was the guest of honor at their daughter's sixteenth birthday party. In Dalat I happened to be taking a leisurely stroll around the lake when I bumped into this family on their vacation. A short way out of Dalat's center and I was soon transported to provincial France or Italy. Many of the old villas, once inhabited by high-ranking French officials on holiday, are still intact and surrounded by terraced gardens and tea bushes.

And then there is the market. It is the only place in Vietnam where I saw such an abundance of fresh flowers and the healthiest, most colorful assortment of fruits and vegetables, both exotic and ordinary. It was there that I first tasted dragon fruit. Fuchsia-colored and about the size and shape of the large baking potato with bright green tendrils, it tasted a bit like a kiwi.

The market is divided into two sections: an outdoor arena and an indoor multi-level building. As I wandered inside, my senses heightened around baskets of chilies and dried eels, several varieties of mushrooms, clothing, tools, yarns and bolts of cloth. The outdoor market was covered with a dark green patchwork of tarps, the heavy middles hung low, pregnant with the collected rain. Water seeped in between the patchwork seams.

I bought a package of wooden chopsticks from a woman and she invited me to sit in a dry corner. We cracked open the soft shells of boiled peanuts in smiling silence. I bowed my head toward her. "Cam On," thank you.

I wove through the crowded labyrinth clogged with the loud din of shoppers and woven baskets, bamboo cooking utensils, pyramids of sweets, barrels of nuts, clear plastic bags of MSG and live fowl ready-to-go in woven banana leaf carriers.

Maneuvering around makeshift tables I came to the farthest edge of the market where the wind blows hardest in the monsoon rains, and where the food stalls are located. In the early morning, steam rises from the cooking stalls creating a dreamy curtain which absorbed me in the cooking perfume. In one corner I came upon a stall that cooked only vegetarian food which is not hard to find in Vietnam.

For about twenty cents I ate a delicious soup with wontons, vermicelli noodles and leafy greens with a coating of fresh mint, cilantro and fried onions. Just in front of where I sat I eyed ten or so platters of foods: spring rolls, sautéed noodles and vegetables, fried rice, and stuffed tofu sculptures made to look like chicken breasts and jumbo shrimp. Without a doubt, this particular food stall was an excellent find and it was soon after I began eating most of my meals there that I was invited to help cook.

I was taken under the wing of the mother who has twelve grown children and pronounced me her thirteenth. Her eldest daughter, Lan, spoke some basic broken English and it was she who hardly let me out of her sight. Lan attempted to translate for all of us. The siblings and extended family took turns teaching me how to cook Vietnamese style. The ladies selling flour in the stalls across the way came over to watch and giggle at my efforts. The woman who sold carrots came to peer over my shoulder. When my spring rolls went from lumpy to long and lean, she cackled, then slapped me on the back and gave me the thumbs up in praise.

Then I was led to the wok fire. The heat rose and covered my front, keeping me warm. I molded and flattened vegetarian patties and fried them in the wok.

As soon as the platters were filled with our morning preparations, Vietnamese shoppers and regulars began to fill up the two long benches and three tables for lunch. When a new customer sat down I came over with a plate of greens and a small pot of tea. Lan and her sister fluttered their chopsticks, piling food on plates, handing them to me and pointing out the customers. Everyone enjoyed the spectacle of a foreigner serving the locals.

When we closed the market down around seven and stored away the woks and utensils, I joined Lan and her large family in their two-room house. There we pantomimed and communicated as best we could, laughing the whole time. My adopted mother sat by my side and plucked individual grapes that she handed to me. Lan explained that her mother was unhappy to see me go, that she would miss her daughter. Since I was to leave Dalat the next day, we took a family portrait in which I, at five feet five inches, was as tall as the tallest man. Despite all the mayhem in the tiny room, the giggling and preening prior to the photograph, mine was the only smile among fifteen faces in the finished print. The Vietnamese are very serious when it comes to pictures.

The following morning I awoke at 4:55 a.m. At 6:00 I planned to meet the bus to Nha Trang, a small city on the coast, and Lan insisted I come say good-bye to her one last time. The market was already very busy at 5:30 as many of the vendors were beginning to set up for a long day. Lan was there in her corner stall alone. I approached slowly in the fading darkness, my eyes on her as I dreaded the thought of saying good-bye again.

In the distance her small, soft body bobbed up and down behind the decayed wooden counter as she pulled out food, bowls and plates from the cupboard underneath. As usual she wore the same thick gray knit hat and dark cardigan with big stains on the sides. She had told me she was thirty-eight years old but she was the only Vietnamese person who looked beyond her age. She opened the market every morning at three and closed it sixteen hours later.

She was glad to see me. "Sit down there," were always her first words. "How are you," were mine. She could never stay still for more than three seconds, and was usually standing over me and telling me my wontons were too big or that I was chopping the cauliflower too small.

"What you eat ?" I knew she was avoiding the fact that I was leaving.

As I sat and watched Lan stoke the brazier coals and feed sticks to the fire underneath the wok, I started thinking about the time. "I am so lucky I met you," I said. For an instant she searched my face in a way that made me unsure if she understood. I enunciated and spoke slowly. "I learned how to cook Vietnamese food. You are a good teacher. When I go home to America, I will try to cook and I will think of you and your family."

"When you come back Vietnam?" she asked me.

"I don't know. Maybe five years. I go home to America, work hard, save money, come back to Vietnam, come back to visit my family here." During my travels I had acquired the habit of speaking in the present tense and leaving out unnecessary words. I stood up slowly and reluctantly picked up my backpack. "I have to go now. Bus. I don't want to leave."

"You hungry, I give you something to eat." She began to wrap two small baguettes in Russian newsprint ripped from a textbook. I started to protest but I changed my mind.

"I'll eat that on the bus, but only one." She put a bread back and proceeded to fill up a plastic bag with a few other items she knew I liked. I would sandwich them in the bread later on. "Cam On." She handed me the food and I put it in my bag. I squeezed her shoulder and took her right hand in my two hands.

"You no forget," she said loudly.

I smiled and shook my head, "Impossible." I began to walk along the row of steaming stalls. The dirt floor was packed from years of activity. At one point I looked back. Lan stood in front of her stall watching me go. As I left the covered market and entered into the light I turned and waved once more to her shadow.