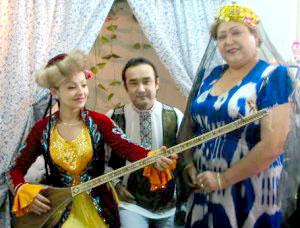 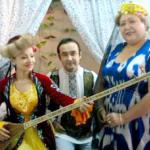 It's just after five PM on the second day of Ramadan, and I'm in the dining room of the Hekim family, dancers and musicians who bring the music, dancing and culture of central Asia to the people of Beijing on a near-nightly basis. Kilara Hekim, leader and mother of this musical troupe, is in the kitchen preparing Fotor, the traditional Ramadan post-fast meal. Traditional delicacies are spread on the table beside me -- almonds, honeyed bread and assorted dried fruits. But out of solidarity with the family (especially with Azimat, the gifted son of this musical trio, now eyeing the still-forbidden spread hungrily, I touch nothing. There is still an hour to go before sunset, after which there will be a feast. And after that, when most Muslim families would be settling in for a relaxing Ramadan post-feast evening, the Hekim's will pack up their costumes and instruments and head out to ply the family business: entertaining the people of Beijing with the music, dance and culture of Central Asia.

"Beijingers are very curious about Xinjiang culture." Azimat tells me "A few years ago, you would have never seen a Han Chinese wearing a traditional Xinjiang hat - now, it is quite common. It seems to be becoming fashionable." I am reminded of the fetish for Native American jewelry found in many fashionable circles in North America.

The Hekims are well suited to act as ambassadors of their culture. Uzbek-born Kilara has been an entertainer for much of her life, so it is natural that her children should have been reared in this tradition. Azimat and his younger sister (the enchantingly beautiful Pazilat) have had their natural skills honed through study - both are graduates of Xinjiang's Ak Su Academy of Dance and Music. In addition to being an accomplished vocalist and dancer, Pazilat also plays Duttar , an unwieldy, long-necked instrument nearly as tall as she is. Azimat's repertoire of instruments is impressive - when I ask him what he plays, he rattles off a list of instruments longer than a Duttar's neck, only three of which I recognize - "Bongo, conga, Tabla, gejak, rawap, dap, nagra, tax, koxak?I also sing."

And in addition to being the mother (without whom there would be no show), Kilara also dances, sings, arranges the costumes and does the intricate traditional braiding of her daughter's waist length hair (this takes four hours, Pazilat tells me, and I sense that she wishes there were a faster way). While she doesn't say so, I get the distinct feeling that Kilara also manages the trio's business affairs.

"Azimat! Don't forget to invite our friend to come see us play tonight" She calls from the kitchen, where she is still cooking. "And if he can't come up tonight, tell him where we perform and ask him to put it in the article." Azimat, both musical virtuoso and dutiful son, complies with his mother's request, telling me that I can catch the family's act and enjoy a traditional Uigher meal at Beijing's Almuhan and the Kiroran restaurants. "We're also considering doing some touring down south, maybe in Guilin and Yangshuo" She tells me. Watch this space for updates.