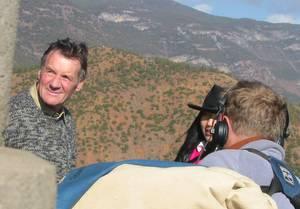 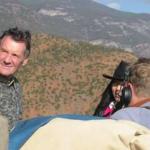 Being paid to write about someone you've idolized since childhood is nice work if you can get it. But when you're killing time in an overpriced bookstore by thumbing through a copy of said celebrity's latest tome and discover that he's written about you - well baby, that's one hell of a peacock feather in the old ego Fedora.

I'd almost forgotten about the three days I spent tagging along with Michael Palin, world-renowned explorer, author, and - for those who may not recollect - 1/6th of the most influential comedy troupe in the universe. Of course, Almost forgotten isn't quite right; Had only recently ceased to bring it up in casual conversation is more accurate.

In the winter of 2003, I was on an assignment for a Hong Kong newspaper, tagging along with a well-known Chinese celebrity called Yang Erche Namu as she headed back to her ancestral homeland in the Tibetan plateau. She was playing tour guide to a BBC film crew, and I was meant to be tagging along for three days to do an article on the real Namu.

It was somewhere on the plane from Kunming to Lijiang that Namu mentioned casually that we'd be traveling with Michael Palin. She knew that he'd been in some movies and travel shows, but as Monty Python never got big in China, she had no reason to know what a legendary figure Palin would be to an American kid raised on a steady diet of British comedy. I remember being stunned, then flummoxed, and finally blown away at the realization that I'd be traveling for three days alongside one of my lifelong comedy idols.

Palin was in China working on his latest travel program, Michael Palin: Himalaya. It's in the book of the same title that I found myself given honorable mention a year later. Palin describes our initial meeting on page 185:

Joshua, a Beijing-based American journalist, is following her (Namu) around. She introduces him with an airy wave of the hand. 'He's doing a story on the real Namu,' she says, without much enthusiasm.

What he (kindly) makes no mention of is the complete star-struck ass I'd made of myself on our first encounter. My inner monologue was solid as I walked down Lijiang's cobblestone street to the restaurant where we were meeting Palin, sounding something like this:

When I got to the restaurant, Palin had a whole table to himself, and was finishing breakfast with one hand and writing in a journal with another. Namu made the introduction.

"Michael, Darling. This is Josh Brown, he's writing an article on me"

"Hello. So nice to meet you." He said, extending a hand. "Do you prefer Josh or Joshua?"

It was here that my script crumbled entirely.
"Erk...?"
I said, adding for good measure and no apparent reason
"Do you think I'm handsome?"
"Why yes, I suppose." Replied Palin. "In a manly way, of course."

But Michael Palin is no stranger to dealing with mystified geeks, and quickly put me at ease by being, well, Michael Palin. He's quite a down to earth individual, actually. We got to chatting travel - writer to travel writer, discussing the ethics of travel journalism ("aren't some places better left undiscovered?" I asked. "Possibly." he answered.)

Palin has that rare gift essential to successful journalists, politicians and psychotherapists alike; the ability to appear sincerely interested in people. And I can say with some degree of confidence that its no act, as I later got to watch Palin doing a series of necessarily insincere shots called noddies for the camera. A noddie, for those who may not know, is a shot done to fill out a conversation sequence filmed in a space where setting up two cameras simultaneously is impossible. Following one such interview with Namu by the family hearth, the director of the program shot Palin in profile for about ten minutes as he nodded his head and said things like "yes, I see" and "Could you elaborate on that?" to nobody in particular.

But I'm sure it wasn't noddies with me. Palin seemed genuinely interested in chatting me up. Especially when it came to life in China. He actually used some of our conversation in his book. To wit:

We talk at breakfast about the strength of superstition in modern China. Joshua lives on the fourth floor of his building in Beijing, because the number four is considered unlucky and so the apartment is correspondingly cheap.

Of course, with time certain details get mixed up. For example, when we met I didn't actually live either in Beijing or in a fourth floor apartment, but was merely relating an anecdote about Chinese numerological superstition using past experience as an example. He's a busy man, Michael Palin, and can't be expected to remember the details of every conversation. Likewise, the following transcript of an early morning conversation Michael and I had over tea on the banks of Mother Lake might also have been altered in the eldritch fog of memory.

MP: You're a funny man, Joshua. You know, well...John, Terry and the rest have been talking about reforming Python for another go, but I've been hesitant to agree, what with Graham still being dead and all.
Me: Go on...
MP: But now that I've seen you in action, I think you'd be just the man...the only man, really, to fill Graham's place in the troupe.
Me: That makes sense. We are both notorious liars. And alcoholics.
MP: So what do you say, Joshua. Will you do it? Would you...I mean, could you...join our little comedy troupe?

Unfortunately, story deadline was closing fast, and I'd just planted tomatoes on the roof. So I had to decline Michael's offer, and he, weeping, vowed to never again return to comedy. I believe I forced him to retract this vow by hitting him over the head with a large fish, but I can't recall.

Details of this last incident are sketchy at best. My recollections are not likely verbatim as such. But I do recall clearly the last evening I spent in his company, when Michael responded to being serenaded in the Mosou language by Namu's brothers by breaking out into last song you'd expect to hear in a rural Chinese village lacking phone lines and flush toilets.

"I'm a lumberjack and I'm OK, I sleep all night and I work all day"

I translated the ditty into Mandarin as best as I could, but the tribe seemed to lack the cultural reference points with which to digest lines like "I chop down trees / I skip and jump / I like to press wildflowers. / I put on women's clothing and hang around in bars".

Perhaps this is why Michael left this incident out of his book. So I can't prove that this happened, either. Still, I'd like to think - in this final recollection of my time with Michael Palin, at least - that I'll one day be proven not a liar, or at least not quite as big a liar.

Should you, dear reader, one day decide to follow in the footsteps of Michael Palin's Himalaya trip, take the time to visit Lake Lugu. While there, wandering troubadours may well serenade you. Listen closely, and when one of them inserts the words "wish I'd been a girlie, just like my dear papa!" into a Mosou tribal song, then you'll know I wrote the truth.

Michael Palin's most recent book is Himalaya, a day-by-day accounting of the journey / television saga of the same name. It can be purchased at most finer bookshops, or online at www.palinstravels.co.uk.