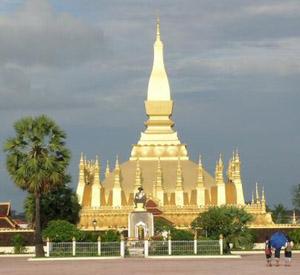 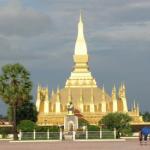 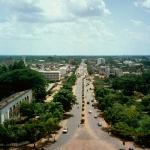 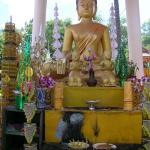 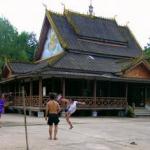 Though not often mentioned among Asia's top five must-visit cities, Vientiane should be high on any traveler's to-visit list. While the Laotian capital's days as a quiet backwater (visited chiefly by foreign aid agencies and the Lonely Planet crowd) are behind it, the city still hovers in that rare and pleasant middle ground of being a tourist-worthy place that doesn't feel like it exists for the sake of tourism.

As befits the largest city of a spiritually-minded nation, chief among Vientiane's attractions are its temples. No article about the Laotian capital would be complete without mention of the fantastic golden spires of the Royal Stupa, That Luang (arguably the most important temple in Laos) or the Hat Dam Stupa (said to be the resting place of a seven headed dragon that saved the city in 1828). But visitors looking to get a deeper glimpse into the city's sacred heritage should rent a bicycle and explore the more obscure areas of town searching out the myriad smaller temples that dot the city. Many of these off-the-beaten path complexes (for example, the virtually unknown Wat Nakhoonoy, which has a restored centuries-old Buddhist crematorium) have not just beautiful statues, stupas and temples, but are home to young monks happy for the chance to practice their English by providing guided tours to visitors.

Exploring Vientiane's back alleys is also the best way to uncover hidden nodes of colonial architecture, throwbacks to the early decades of the 20th century when the city was an important part of France's empire in Indochina. Some of these mansions are crumbling, long-faded beauties, while others are painstakingly resorted. One neighborhood with more of the latter sort can be found on the south side of town around the International school on the south side of town, where various international aid organizations use these restored colonial mansions as their base of operations in Laos.

Visitors looking for a taste of anti-western propaganda (perhaps to counter the notion that the government has somehow knuckled under by allowing so many of Vientiane's prime mansions to be taken over by foreign agencies) need only visit the National Museum. Considering the fact that Laos endured a decade of horrific American bombing in the name of containing communism, the overall anti-western bent at the museum is fairly mellow, though some specific exhibits (specifically those featuring pictures of the aftermath of American bombs) are quite heavy. Laos' former colonial masters aren't spared; a large oil painting showing French colonial soldiers oppressing the people is one of the largest in the museum.

Laos' status as a former French colony does offer one specific blessing; while the British left their colonial subjects with efficient bureaucracies and functioning railroads - the French left theirs with an appreciation for coffee, baguettes and excellent food. Culinary minded tourists (especially for those with a taste for pate, escargot, and other Parisian fare) will find Vientiane one of the best bargains on the planet. Places like Restaurant Le Silapa and Le Central offer multi course gourmet specials for under 90 RMB, exorbitant by local standards but a bargain anywhere else.

If shopping is what floats your boat, then a trip to the morning market (Talat Sao) may well be the highlight of your trip to Vientiane. Located next to the central bus station, Talat Sao is a dual-level cornucopia of Lao silks and fabrics, wood carvings, works of art of both the rare and mass produced variety, silver, Buddha statues and curious of all sorts. Sadly, the government is currently in the late planning stages of tearing down the old traditional market and replacing it with a more modern structure (a billboard outside the market says this process will begin sometime in 2006). Despite its moniker morning market, the market is open all day. Curio shoppers looking for smaller, more portable items might want to have a look on the curb next to the market (in between it and the post office), where merchants in tribal dress offer a variety of strange items at somewhat cheaper prices than those found inside the market itself.

Finally, while Landlocked Laos is notably short of beaches (there is the Mekong, though it's considered a ghardia risk for swimmers), Vientiane does offer opportunity for relaxation of a uniquely damp heat variety. Wat Sokpaluang, or Forest Wat is home to Vientiane's original herbal sauna. Though once operated by monks, the sauna's management was recently taken over by a vivacious and multilingual woman called Noy, who greets customers and hands out multicolored Laotian sarongs. The actual sauna is inside of a bamboo hut with a hole cut in the floor through which steam rises from a boiling cauldron of local herbs and flora set below (the actual ingredients are a closely guarded secret). Massages are given on a veranda attached to the steam hut. At 30,000 kip (about 25 RMB) for sauna and massage, prices are low even by Lao standards.

Tourists looking for the sleepy Shangri-La of Indochina that Vientiane was just ten years ago. once was might be disappointed; the city has changed much over the past decade. The rutted dirt tuk-tuk tracks that passed for roads in the nineties have been widened and paved, and old colonial style guesthouses now contend for business with an increasing number of more upscale hotels. But while traffic has increased, the avenues are still mostly silent after ten PM, and the scent of jasmine is still more prevalent than that of exhaust. This alone makes Vientiane worth the trip.