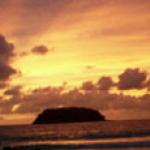 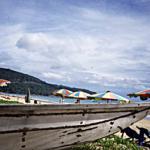 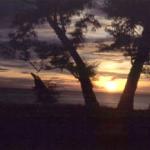 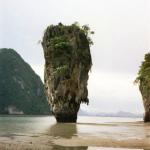 "Phuket in August! It's monsoon season! Why go all that way for rain?" When learning that we were returning to Thailand's tropical island, this time in off-season, our cynical world travelling friend slowly shook his head. "You're making a big mistake," he warned.

We arrived in Phuket in the evening and the night was a sauna; the hour-long taxi ride to the southwest of the island revealed many roadside puddles. About fifteen minutes before arriving at our hotel, the rain started again and the taxi's wiper blades slapped furiously. In the rear view mirror the driver smiled at two sullen jet-lagged passengers, each remembering our friend's admonition.

At reception, we were cautioned about swimming in the sea, "It is very dangerous during monsoon season. Please use the pools." Outside, the downpour overflowed eaves troughs; the sidewalks flowed like rivers. Then, abruptly, the rain stopped. "Tomorrow will be sunny," the porter smiled unconvincingly, as he showed us our room. We noted the umbrellas near the door.

From the balcony we could hear the heave and crash of fierce waves in the torrid darkness. Our sleep was filled with monsoon-haunted angst.

The morning sun rose over the mountainous jungle across from The Kata Thani Hotel. Evanescent specters of mist danced through sunbeams.

Three girls on a small motorbike rumbled down the deserted road; the two passengers were gracefully lowering and raising their extended arms in counterpoint, a synchronized slow flapping of wings.

By 9 AM, we were on the beach, sea-foam searching out our feet, our monsoon worries melting in the sunshine. Soon we were lost in the mad antics of the sideways scuttling sand crabs and lulled by the sea's rhythm. Between each wave's unfurling smash and seething retreat, there was a silence, and for a moment, the air whined with the electric buzz of cicadas.

Located on Kata Noi Beach separated from big sister Kata Beach by a rocky promontory, The Kata Thani Hotel is without doubt the most environmentally conscious hotel on the island. Every morning there is a clean up crew of men and women, all hotel employees in the uniforms of their respective duties. Chefs, porters, reception workers, waiters and waitresses walk the beach with rakes and containers, removing the tide's detritus. There are no jet skis, no water skiers, banana tubes or parasailors pulled by roaring high powered motor boats; such activities are considered by the management as sources of noise, air, water, and visual pollution.

Ignoring the red flag and our previous warning, we waded up to our knees in the clear, warm Andaman Sea. About sixty feet away, ten-foot waves heaved, curled, and crashed. Slightly diminished, the white caps broke around and over us, pounding us with a roiling turmoil of froth and fury, before hissing in retreat and launching another attack. After enduring a number of assaults, we made our way back to the beach on rubbery legs, feeling as if we had just completed an energetic workout. The smile of the ever-vigilant lifeguard did not belie his feelings regarding the foolishness of two intrepid tourists.

The tranquillity of Kata Noi Beach is reflected by the few shops and restaurants in town. Kata Beach, a short tuk-tuk ride away, has a bit more hustle-bustle. There are many restaurants, including quite a few small alfresco eateries many of which specialize in German fare; there are boutiques, pubs, internet bars, tailors offering made to measure suits at cut rate prices, bars and many shops and street stalls where vendors will not let you pass without inviting you into their stores or to peruse their displays.

It was at Kata Beach that happenstance brought us to The Boathouse Wine and Grill; subsequent visits were deliberate. It was difficult not to return to what is undoubtedly the finest restaurant in Phuket and one that has a growing well-deserved international reputation. Although it boasted a world class wine cellar with 360 labels from most wine-producing countries, and although the service was friendly, helpful, attentive and choreographed, it was the food, prepared under the auspices of the charismatic executive chef Tummanoon Punchun that brought us back again and again.

"I would describe the cuisine as Eurasian," the ever smiling chef Tummanoon explained. "I use French recipes combined with Asian flavors." The chef makes annual visits to different European regions and returns with new methods of preparation; he then incorporates a distinct Thai flavor with herbs, spices, and vegetables. The resulting synthesis is an exquisite taste that is sure to be savored again in memory.

The restaurant is in The Boathouse, a prestigious boutique hotel with thirty-three rooms and three suites that is owned and operated by noted architect M.L. Tridhosyuth Devakul. Known locally as Mom Tri, he not only designed The Boathouse, but also Le Meridien and Club Med on the island. Also managed by The Boathouse is the adjacent Lobster Square, a small group of specialty shops, galleries, and The Gung Café; under the direction of Chef Tummanoon, this restaurant specializes in the succulent shellfish "gung" (the Thai word for rock lobster) which is served in a variety of predominantly Thai styles.

We were on the beach terrace of The Gung Café at sunset. Photographers clicked madly as the pale sun sank below the horizon, tinting the grey sky with splashes of yellow. Monsoon sunsets, however, are wily and mischievous; while some photographers walked away, unimpressed, the sky and sea flared orange and then erupted in crimson. The scarlet show was ephemeral; in a moment all was dark, the spell broken.

Karon Beach, where we had stayed five years ago, was barely recognizable; development has transformed a laid-back village into a bustling town. New hotels, condos, boutiques, malls, restaurants, and open air bars are sprawling back from the coastal road, usurping or hiding what used to be. Such is progress; such is success. The beach here, however, is definitely the best on the island; the white sand is as soft and fine as powder, crunching and squeaking as you walk on it.

At a beach restaurant during a lunch of tom yam goong - the popular Thai soup of rich broth, prawns, coriander, lemon grass, tamarind juice, shallots, lemon leaves, and chili peppers - a bird landed on top of my bottle of Singha beer. After belting out an a cappella tune, it bent its head and awaited a food tip, obviously having played this gig before.

As we crunched our way from the restaurant, the waitress came running after us. Although Thai restaurants routinely add tax and service, we had left a small additional tip that she interpreted as forgotten money. When she realized our intent, she beamed, and after a graceful wai, bowing with hands held together as if in prayer, she ran back, the sand squeaking.

Patong Beach, only fifteen years ago, was a tranquil Muslim fishing village. Now it is a hectic, sprawling, raffish, sometimes vulgar, always interesting honky-tonk of a town. Patong is a carnival, a circus, a zoo that can be experienced in microcosm in any of the busy open-air bars.

Along with a growing expat community, there is a large Hindu and Muslim presence as well as crowds of tourists who either do not know it is monsoon season or could not care less. Those same visitors also no doubt have briefly wondered why so many young Thai girls prefer much older foreign boyfriends.

Shopping in the hundreds of shops and stalls along the streets and alleys can be a delight or wearying depending on your tolerance for the monotonous imploring of desperation-driven vendors. Like side show barkers, they attempt to weave a spell: "Where you from? Where you staying? First time in Phuket? How long you stay? Look at my shop. Very cheap price for you. I can discount. Look! Look! Cheap price!" The incantation becomes a refrain as you wander past the cajoling, beseeching sellers. The haggling ritual can soon become tedious as feverish merchants enact the timeless bargaining drama performed on countless street stages.

"Where you want to go?" is the mantra used by the tuk-tuk drivers who line the main drag of Patong. After negotiating the fare, we left the Patong midway with its touts and transvestites, hookers and hawkers, beggars and boozers, and bounced and sputtered into the blackness of the sultry night, our lives in the hands of a speed demon, ever grinning tuk-tuk driver.

A popular and very interesting side trip is to Phang Nga Bay on the mainland to view the remarkable limestone islands, some of which jut vertically over 900 feet. Declared a national park in 1981, the bay is sheltered and the waters are calm even during the southwest monsoon season. Sightseers tour the bay in long-tailed boats; powered by car engines adapted to drive a propeller at the end of a long shaft, these boats carry about forty passengers who sit right at the water line.

The boats roar through the olive colored waters, past mangrove swamps, through eerie grottoes dripping with stalactites, and around some of the 120 towering verdant islands where the elements seem to have been influenced by Salvador Dali in creating grotesque patterns in the limestone.

The major destination of the fleet of the tourist laden long-tailed boats is the striking Khao Tapoo, known locally as James Bond Island since it was a locale in "The Man With The Golden Gun" filmed here almost four decades ago. Most boats unload at a nearby island, which is usually teeming with sightseers. Here there are many souvenir stands selling seashells, T-shirts, ersatz pearl jewelry and other tourist trinkets. Dried fish, considered a delicacy by the Japanese tourists, is also sold; the strong smell permeates the entire island. The women vendors here are relentless and very aggressive, often grabbing your arm while haggling over prices while at the same time maligning the vendor and quality of goods in the next stall.

We took the afternoon tour but it was too overcast for a sunset; on our return, a brief rain shower filled the bay with haze. The islands stood like ghostly sentinels in the mists and fading light.

On another sunny, sweltering morning on Kata Noi beach, a vendor with an attaché case full of knock off designer watches pointed far out to sea at the bank of black clouds. "No business for me this afternoon," he lamented, shaking his head.

At noon, the deluge started. From our balcony, we watched the wind-racked palms bending in the lashing torrents. The unseen sea's thundering anger was barely audible as the rain dropped like spears.

The storm provided an opportunity to write a few postcards, including one to our skeptical, monsoon-warning friend. His card was succinct and truthful: "It's pouring rain." We could already hear his smug, "I told you so."

Three hours later, the longest storm of our two-week stay became a light shower and then the sun blazed. We sloshed and splashed like five-year-olds through knee-deep rapidly evaporating puddles. There were rainbows everywhere.

The southwest monsoon season runs from May to October. High temperatures from June through August range from 25-32 C. During the monsoon season there can be brief but heavy showers; most days, however, are sunny. September and October are the wettest months. The high season is from November to April.

The Klongs of Bangkok