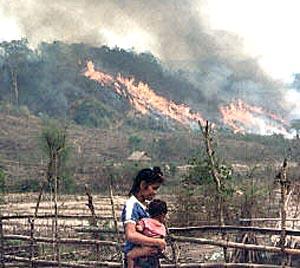 A young woman with a baby in the fields as vegetation is burnt off in the background, at a Hmong village resettled in the Xiengkhone district of the northern Laos province of Xayaburi. 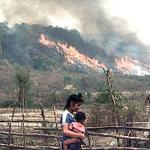 VIENTIANE, April 25, 2004 - Faced with a challenging topography and a dispersed population, Laos has gambled on a controversial poverty reduction programme of relocating villagers from remote, mountainous areas to the plains.

During the 1990s, the Southeast Asian nation, where 40 percent of its five million people live in the mountains, initiated a vast programme to attract them to lowland areas where it is easier to build infrastructure.

National figures for the number of people that have been relocated are not available, but in the northern districts around half of villages have moved over the last decade, according to a foreign anthropologist.

The government hopes the programme will eradicate slash-and-burn cultivation, which is practised by around 40 percent of the population and has contributed to the destruction of country's forests. It also wants to make best use of roads, schools and hospital built in so-called "focal sites" in areas where distances are measured less by kilometres than hours of walking.

"This is a part of our history. Lao people are mobile. So we don't displace people, we develop opportunities and it is up to the people to choose," said Dr Parisak Pravongviengkham, an official at the Ministry of Agriculture.

The government has received the support of the international community. "There is serious commitment to eradicating poverty," said Finn Reske-Nielsen, United Nations Development Programme's resident representative in Laos. "Voluntary relocation makes good sense in a sparsely populated country like Laos, where it is difficult to bring educational, health and other essential services to the people."

But he cautioned that "relocation schemes need to be well thought out and planned in consultation with the affected population groups."

Although most aid workers endorse the principles of the government's policy, they say its results range from indisputable success to humanitarian catastrophe because of the way it has been implemented. Some complain that pressure rather than negotiation has resulted in many people relocating against their will. They also say the way the programme has been organized is socially destructive and economically counter-productive.

In those communities that fail to adjust from traditional slash-and-burn cultivation to animal raising or modern farming techniques, the mortality rate soars and output falls. In some cases, the villagers even return to live on the slopes after some years.

"Human losses and sanitary consequences suffered by the resettled populations are close to the ones we usually observe with internally displaced populations in conflict areas," said one aid worker referring to a northern district.

Often the displaced have to take on poorly paid jobs to supplement their resources, he added, requesting anonymity. "This results in their conversion into a new rural proletariat, quite far from the development scheme and the improvement of their living conditions that the government lured them with."

Parisak, however, refutes this although he concedes that in some cases the relocation programme has failed to meet the aspirations of those involved.

"If we have capacity for 200 families and if 1,000 are coming, we don't have the resources to deal with it," he admitted. "In some areas, the implementation process is very weak. But we have to take successes as examples," Parisak said. "No one ever told me he was happy with slash-and-burn cultivation and living in the forest."

While not questioning the government's commitment, some foreign experts say more flexibility and better planning are needed. "The promises made to the villagers to encourage them to move are not always kept, and one can then assert that they have been misled by the authorities," said the foreign anthropologist.

The opportunity to move towards a new road or an irrigated plain, according to him, often divides the villagers themselves. While the younger generations are more keen to move, their elders often prefer to remain where they were born.

"Most of the time, the local authorities try to convince the whole village to leave in one go or within a very short period of time. For them, the goal is above all to respect the five-year plan elaborated at the provincial level," he said.

"It would probably be more judicious to let the volunteers - often young people - leave to build the houses and to learn the new agricultural methods, then to make the older generations join them a few years later."