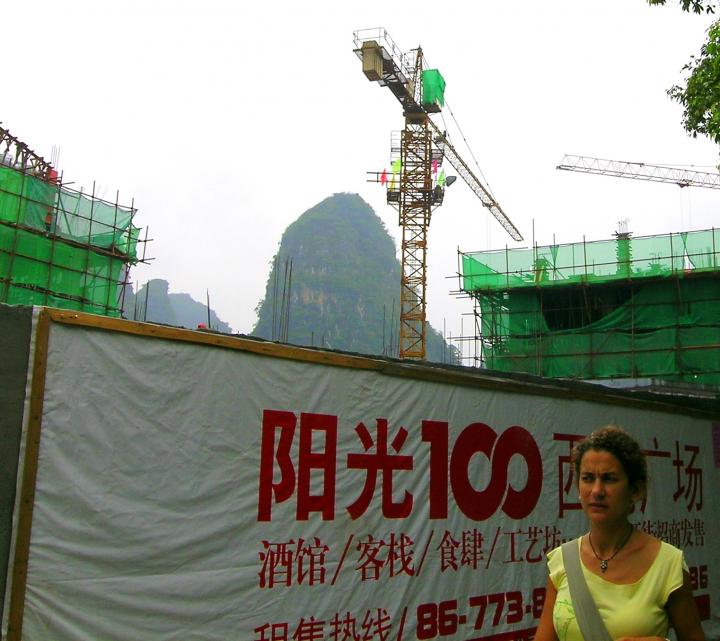 The cranes rise higher than the hills in Yangshuo 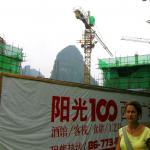 Yangshuo's oppressive summer heat may have given way to autumn breezes, but over on the charming cobblestone alley of Chenzhong Road (just off the crowded tourist hub of West Street), Johnny Lu is having a hard time enjoying the cooler weather. His new shop, Yangshuo's only café & second-hand bookstore, though stocked with thousands of titles, strong coffee, and seating for two dozen, is devoid of customers. The business-killing culprit is construction noise: The drumming jackhammers and an incessant high-pitched metal-on-metal pipe cutter grinding away make for a poor reading environment.

The racket comes from all directions on this once-quiet street, beginning at dawn and carrying on until far into the night.  But for Johnny, who's just moved to the new shop after skyrocketing rents forced him to close his previous one on West Street (where he'd been a fixture for many years) the clamor keeping away today's customers may herald better days to come.

"Once this area is finished, I think that it’s going to attract more customers – especially westerners, because for many of them West Street has become too commercial. It's noisy now, but I'm looking on the bright side."

Quiet places in this small and once peaceful tourist town of Qing-dynasty style buildings are increasingly hard to come by. Just a few years ago, Guihua Road (Just around the corner from Johnny's store) was best known as a back alley, a place where the loudest noise might have been the shear-snip of an outdoor barber or the scrape of a straight edge razor. The shuffle of sticks from the tin can of a local fortune teller might have completed the aural soundscape.  But those days of quiet are gone now. Across the alley from where the barber and the prognosticator still ply their trade, a new complex, one promising to be the tallest in Yangshuo, rises skyward at a breakneck pace. As on Chengzhoong Road, the ear-wrenching jangle of construction seldom stops.

Despite the noise, few merchants bemoan the loss of peaceful days. Though longtime foreign residents ("Yangshuo Comrades," as they're sometimes called by locals) grumble that Yangshuo's quaintness has been all but destroyed by rampant development, the townsfolk tend to take a different view.  Indeed, most of the merchants on Guihua street, from restaurateurs to street peddlers and sidewalk entrepreneurs, are willing to endure a few seasons of noise if it brings with it future prosperity.

Says an old shoemaker who plies his trade on a patch of cobblestones across from the construction site, " It's going to bring more tourists to Yangshuo, and more of them will have a reason to pass by my business."

Though the opening date for the new plaza, a multi-storied mall being built in a faux Qing dynasty style, has yet to be finalized, the shoemaker is already reaping rewards. Grinning, he points to a small pile of shoes on the blanket by his feet. "Construction workers wear out their boots fast, so they bring them to me for repair!"

Not everyone is thrilled about the town's transformation. Some long-established businesses are finding that they no longer fit in with Yangshuo's new demographic. Bargain hostels and banana pancakes might appeal to the foreigners on a budget  and spiritual seekers who once made up the bulk of Yangshuo's visitors, but the new market is primarily middle class Chinese looking to spend a few days in a gentrified version of the past. By and large, these newly empowered Chinese tourists expect something shinier for their yuan and Yangshuo's hostels look likely to be replaced by more commodious (and costlier) lodgings.

Another thing the new tourists have little use for are items once iconic with Yangshuo, retro-Mao kitsch and t-shirts with phrases like "I survived SARS". Working from a T-shirt store barely wider than the average human arm span, Linda Lu is feeling the squeeze. "Most of my customers are westerners," she says. "Chinese people don't buy this kind of stuff."

Her tiny shop, wedged between two larger ones, is on a prime stretch of West Street just up from the river. Once her lease comes up for renewal, it's likely that she will be forced to move to a cheaper neighborhood.

But when the time comes, it may already be too late. As Yangshuo sheds its backpack-friendly trappings for Qing-chic pretenses, businesses like Linda's may well find themselves an anachronism in a town selling its own sanitized version of antiquity.