One arm one leg across China 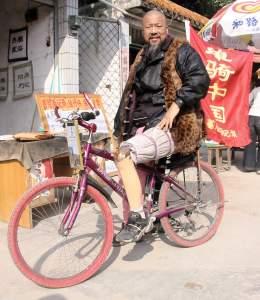 Meng Hui on his Ride 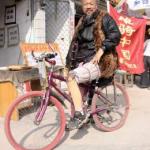 Working his craft from behind a small card table set up on the side of the Li River in Yangshuo, Guangxi province, Liaoning native Meng Hui is not your average calligrapher. One thing that sets him apart is his work itself. The characters that he scribes on scrolls and fans are anything but typical. Rather than sticking to modern characters, Meng Hui prefers to depict on his work the Chinese characters of old, ancient and puzzling pictographs that Confucius or Meniscus might have appreciated. He shows me one piece, a sandalwood fan with ten characters running gracefully down each petal. "Look carefully," he says in a northern Chinese brogue "These are all the same character - 'fu' but I have written them in each incarnation of fu throughout history!"

Another thing that makes Meng Hui stand out from the other merchants and artists along this tourist-heavy strip is his sales style itself. Rather than pandering to the crowd with flattery and small talk, Meng Hui has the attitude of an artist who knows that his work is good, an attitude that seems to say If you are enlightened enough to recognize good art, you'll buy my work unsolicited. If you aren't, my solicitation would be wasted on you. During the course of an hour spent on a chilly January afternoon watching Meng Hui work, I never once saw him ask a potential customer to buy something. Yet in that hour, apparently he was right, making several unsolicited sales on a rather chilly day,

But perhaps the most readily noticeable difference is that this particular artist has a rather unusual way of holding his mao bi. Rather than grasping the horsehair brush in his hand, he does his scribing with the brush strapped to his upper arm above his right elbow - or rather, where his right elbow would be, if he had one. Meng Hui lost his right arm in 1986, in the same car accident that took his left leg.

To most, such a catastrophe would mean the end to active life. To Meng Hui, it marked a new beginning. In addition to forging a career as a calligrapher, Meng Hui boasts a resume of physical achievements that few can match, being one of a very few people to have ridden through (almost) every part of China on his bicycle. He took the best tales from his 50,000+ kilometers in the saddle and wrote a book, 'Dan tui du bi zhou zhong hua' , which translated, means 'one arm one, leg across China'.

Looking towards the future, Meng Hui tells me that he plans to keep working at his craft. Health, unfortunately, is still an issue. "I have a problem with my kidneys that forces me to go into Guilin for dialysis every week, and this costs me a day of work". When asked about plans for future journeys, Meng Hui doesn't hesitate. "I hear Taiwan is lovely," he says. "It's the only part of China I haven't ridden through yet. Hopefully I can make it there someday."