The Orient-ation of Somerset Maugham 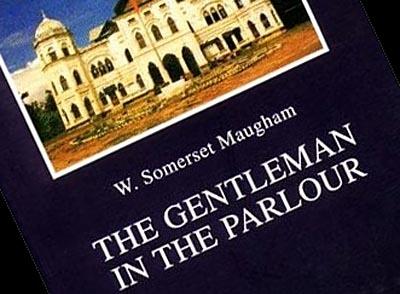 The Gentleman in the Parlour - a travelogue of Maugham's 1923 trip through Burma, Siam, & Indochina 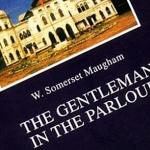 It was quite by accident that I completed Somerset Maugham's The Gentleman in the Parlour while sitting at a tropical resort Maugham himself would have recognized.  Standing like sentries around me are a number of interchangeably sleek and beautiful Thai waitresses attending to sunburned and portly Europeans, who are busy sucking up chicken salads and Singha beer.  The place is clean and magnificent, but too big.  A soccer ball appears and disappears from the corner of my left eye; ahead is the Gulf of Thailand; and to the right is a set of impeccably dressed Japanese businessmen, vigorously agreeing with each other.  Were I drinking gin and bitters instead of coffee, or smoking a pipe and not cigarettes, I might be able to pass for Maugham, who is one of a handful of well-known novelists to have written extensively about Southeast Asia.  He has been resurrected by White Orchid Press, a Bangkok-based publishing house that produces the Itineraria Asiatica, a collection of handsomely bound volumes "containing first-hand descriptions and narratives by travelers in Asia".

The Gentleman in the Parlour is a travelogue of Maugham's 1923 trip through Burma, Siam, and Indochina.  The title, taken from Hazlitt, refers to a precious anonymity, which Maugham associates with travel.  His trip included a trek through the Shan States, now a rather uncomfortable part of Burma.  Maugham passed through Mandalay, Ayutthaya, Bangkok, Saigon, Hue, and Phnom Penh - to name a few.  He gushed over Angkor Wat and Rangoon's Shwedagon pagoda; and the efficiency and creature comforts of Siam he duly praised.  "It was civilization," he sighs.  "What organization!" he cries.  This was before he contracted malaria in Bangkok, poor sod.  In Haiphong he was offered, but refused opium, because he had already tried it in Singapore and the following day had "vomited [his] soul out."  Ah, the tropics.

Maugham is a travel writer of uncommon honesty.  He admits that his motives in writing this account include making money and killing time.  He will not pretend to be astounded by small variations in local custom or dress.  The history of the region doesn't interest him.  If a room is shabby or a meal "insipid", he says so.  When Ayutthaya bores him, he says so.  If you've seen one Buddha statue, he implies, you've seen them all.  Most pagodas are "crumbling to pieces," and he fails to see the point of comparing, contrasting, or cataloguing them.  In Hanoi he finds "nothing much"; Haiphong is "dull".

But lest you think that Maugham yawned his whole way from the Irrawaddy to the Red River, consider that he had "never seen anything more wonderful" than Angkor Wat.  He all but snaps his pen and burns his papers out of frustration at the insufficiency of words to describe it.  In his mind, Khmer sculpture excels that of the ancient Greeks or Mayans; and he lingers amidst the temples in the hope of "discovering some strange and subtle secret."

Not only at Angkor does Maugham seem on the verge of some Pauline revelation.  Like many travelers to the Orient, he expects to find the meaning of life there, as if this were a strictly Asian export.  You may think him silly, or racist, for thinking so.  But, like it or not, Asians can be reticent, and reticence is mysterious.  A Westerner like Maugham, accustomed to relentless blab, can hardly be faulted for supposing that the silent are withholding secrets.  And sometimes a name can suffice to replace the secret.  "Bangkok," he writes.  Full stop.  "Mandalay."  A nostalgic sigh.  The names elicit all sorts of exotic associations, but in Bangkok our man finds mostly sun, heat, noise.  Stunned and oppressed, he is easy prey for the banal anopheles.  In many places he realizes that the Contemplative East is often so loud or distracting that contemplation of the sort Maugham desires is nearly impossible.   He's learning.

Unlike so many travel writers of today, Maugham has not been hired by a media conglomerate to entice fatigued businessmen into trading their dollar bills for rubdowns and Mai Tais.  In fact, he and his audience seem to be more interested in learning about life; travel only provides inspiration.  Probably Maugham can be counted part of a general movement caused by the deplorable carnage that was World War I, which demolished Europe and its illusions about progress.  Suddenly Europeans looked to the East for answers.  Not that the East had any to give; and by 1930, when Maugham's book was first published, Japan was already preparing to make World War I look like a regional spat.

But perhaps the necessary journey was not so much to the East as to the South.  While the people of the colder climates blast each other to pieces through sheer boredom or irritability or greed, the people of sunnier climes silently wish that the Northerners and their clients would relax.  I am not joking.  The international news in Thailand often resembles one lugubrious shake of the head.

Amidst some Burmese villagers, Maugham discovers that "it is a gently industrious, happy and peaceful life that they seem to lead, and the thought crosses your mind that here are people who have found at least one solution to the mystery of existence."  Which is to say that there is no great mystery here, folks.  Ambition can be deadly, and human existence is mostly about food, sleep, sex, and finding harmless and pleasant ways to fill in the rest.  Being a little poor or bored is better than being completely dead.

Recalling Malaysia under British rule, Graham Greene complained "of British clubs, of pink gins, and of little scandals waiting for a Maugham to record them" - a nice summary of Maugham's time in Rangoon, by the way.  Like a good Briton, Maugham apparently did not mix much with "the little brown men" from whom he nevertheless expected the answers to life, the universe, and everything.  When his native cook turns out to be an incompetent drunk, Maugham expels him with not so much as a tremble in his upper lip.  He refuses to become an apologist or a physician for the ailing British Empire; he scorns the "imperial platitudes that fall so trippingly from the mouth of those who make it their business to govern empires".  But with his constant "chap"s, his hearty liver, and his games of patience (a.k.a. solitaire), he fits right in.  He produces two Englishmen, both of whom have made the fatal mistake of taking a native mistress.  The first loses his mistress because, hoping to return to England eventually, he refuses to marry her; the second keeps his mistress because she is a robot designed to cook his meals and prepare his opium pipe.  In both cases, the underlying message is clear; the message is Kipling's:  keep to your own kind.

Then again, Maugham was not entirely a legit Brit.  He was born in Paris and ultimately settled in southern France.  And he is aware that the French tended to have an easier time mixing informally with their subjects.  "The Frenchman," he writes, "has deep down in him a persuasion that all men are equal and that mankind is a brotherhood" - a persuasion, I daresay, also to be found in Americans.   But the English continue to drag their dreary class system with them wherever they go.  "Whereas the Burmese only respect the English," says Maugham, "the Annamites admire the French."

But is there not a slight tremor in Maugham's voice when he tells us that the Frenchman will sit, eat, drink, and play with the Annamite?  What's next?  Why, nothing less than allowing the Annamite to govern himself, which we all know would be impossible - that is, until terrified Americans were leaping into helicopters hovering over the Saigon embassy in 1975.  For that disgrace, we may blame the French, as we always do, for everything.

Sometimes Maugham is so English that it brings a tear to our eyes - a tear of pity, perhaps, for what he rightly calls his country's "insularity" (another quality that Americans have to some degree inherited.)  Of the English opium addict, Maugham writes that he was considered "a rum sort of cove" (an odd sort of man); to a future historian of the British Empire, Maugham is moved to "cock a snook" (show contempt).  Maugham laughs and Britain laughs with him, but the rest of us are wearily reaching for our dictionaries and its apologetic warnings:  "Chiefly Brit."

Despite the Briticisms, one often wonders if Maugham is writing in English or translating from German, Old Norse, or some language in which commas are used arbitrarily.  For a popular writer, Maugham is sometimes a real chore to read - not archaic, just bad.  As if he were Thoreau writing with a head cold or a hangover, Maugham tries to hide commonplace thoughts, yearning to be profound, behind prose that deserves to be sandblasted.  "I clung to the coolie's neck in a manner I well knew ill became me."  "It was there then that the Messageries boat...set me down at two one morning."  "The trees and the dwarf scrub that grew wildly where in time past were the busy haunts of men, were pale and grey."  This is my favorite:  "He was reticent, and as is the English way could tell but in clumsy words what he had found there."  Clumsy words indeed!  The critic A.J. Liebling once wrote that an articulate Englishman "is a contradiction in popular-fiction terms, like a Scrutable Oriental."  I find myself not so much reading Maugham as mentally rewriting him.

Enough about Maugham's prose; let us consider his prejudices.  Maugham succumbs to the temptation to speak of the East or the Orient as though it were one thing.  Back then, the "East" meant roughly east of the Suez Canal, through which most visitors from Europe had to pass.  But what is one to make of Maugham's claim that the sky in Burma was "Eastern blue, which is milky, pale, and languorous"?  Does he honestly believe that the sky looks the same in Bombay as it does in Yokohama?  No, he is only repeating things he's heard about the languorous East.  Elsewhere he generalizes about the Oriental character, but in its favor.  With all the pretension of an ethnographer addressing the Royal Geographic Society, Maugham says that the "Oriental has a modesty that the ordinary European would find fantastic.  His virtue is not the same as the European's, but I think he is more virtuous."  One can almost hear the roar back in England:  "No!  It can't be!"  But this is probably the unsettling effect Maugham desired.

Of course, Maugham wrote before the Gestapo of political correctness ordered us to view tribal humanity as a collection of atoms having nothing in common with each other; it is hard to see which worldview is more misleading.  Unfortunately, air travel has diminished the role of the Suez as a kind of portal between hell and paradise, but there are still fierce opinions as to whether hell is East or West.  The story of the opium addict says it all.  For years he works in Asia, lives a righteous life, pinches pennies, dreams of returning to England.  One day, he returns.  Months pass.  And then:  "He was fed up with London.  He hated it.  He was going to get out and this time he'd get out for good.... When they got to Suez and he felt the first touch of the East he knew he had done the right thing.  Europe was finished.  The East was the only place."

Review of W. Somerset Maugham's The Gentleman in the Parlour, White Orchid Press, 1995.