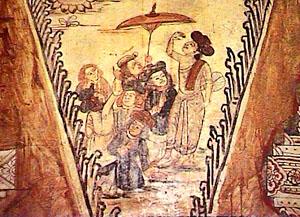 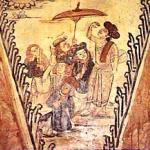 There is probably no more interesting way to approach a country and its history, than through the writings of its observant and literate visitors. DeTocqueville's Democracy in America revealed an America hidden to Americans, while Herodotus provided a portal to the ancient world outside Greece. Of the history of Siam many writers may claim ownership, and most appear in Michael Smithies' compilation Descriptions of Old Siam.

Describing the Kingdom from the 16th century to the late 20th, the book consists of sixty selections from the writings of merchants, explorers, priests, missionaries, emissaries, scientists, Anna Leonowens of 'Anna and the King', and the occasional tourist. Each selection is distinguished by its writer's bias and distinctive style. The Siam that emerges is a kind of impossible mosaic, which Smithies, in his brief but thorough prefaces, compares to historical fact.

These biases are plain in the writers' endeavors to determine whether the Siamese are honest. A 17th-century Dutch sodomite demurs, finding the Siamese "dissimuled, deceitful, and very lying." An Englishman writes that "every request of an accredited foreigner is instantly granted - in words." Other writers differ. A Frenchman asserts that "the Siamese detest injustice" and are not deceitful, while the Persian claims "there is nothing which they consider to be more low and mean than telling a lie." Little wonder that such flippant, contradictory generalizations are now passe.

Descriptions is also a telling record of missionary activity in Southeast Asia. However arrogant their convictions, the missionaries have benefited posterity through their meticulous record-keeping. Most of what we know about cultures without written histories comes from them. Sadly, these cultures were too often lumped together, as they are in Descriptions, as "heathen" and idolaters too stupid to comprehend Christianity's preeminence.

Perhaps because of the missionaries' failure to understand their potential converts, their conversions in Siam were few. In particular, Descriptions relates the long, concerted effort by the French under Louis XIV to convert Siam's King Narai. Though cordial relations between Siam and France depended in great measure on Narai's embrace of Catholicism, the king would not deign to receive baptism, even on his death-bed. The Persians similarly failed to convert him to Islam. Narai preferred strutting around in Persian dress to adopting the Persian religion.

Smithies' book also serves, as the back cover claims, as a sort of alternative guidebook to present-day Thailand. Many of today's festivals and spectacles appear in the past: the Song Kran water-splashing festival, the Royal Ploughing Ceremony, and the northeast's Rocket Festival. Thai boxing is witnessed, as are its more bizarre counterparts: cock-fighting and the largely defunct fish and beetle fighting.

Variations on Thai superstitions and habits are also observed. As early as the 17th century, Thais gave their children silly nicknames as abbreviations of their multisyllabic monikers. Then, the names were largely natural objects - crystal, precious stones, gold. Now they are commonly English words or consumer items - Kate, Beer, Benz. Big ears to the people of 19th century Chiang Mai indicated longevity; today they indicate knowledge (think of them as receivers). The Siamese and Thais both believe eclipses of sun and moon to be caused by the bites of a hungry dragon. The dragon is scared away by the banging of gongs. The Siamese also believed that fairness of complexion was evidence of good works in past lives, which may go a long way to explain the appalling amount of money modern Thais fork over for skin-whitening creams, and their disdain for exposing themselves to the sun.

Yet for all the richness of its descriptions and the insights it provides into modern Thailand, Descriptions is not an easy read. Many of the selections are written in an archaic English that is definitely an acquired taste. Many are also infused with stereotypes and a faith in Western superiority that is comical at best. But it is essential, for any informed opinion regarding our shared colonial past, to know that the Siamese were once described as "this black race of mankind who. . . .look almost like Monkeys." At the least, it will cause us to hesitate any time we feel inclined to make similarly foolish, and usually racist, analogies or generalizations.

Descriptions provides some counter-evidence to any argument that Siam was better off before its modernization. The luxuriant Eden, exotic and exciting, filled with "pomp and splendor" was nevertheless a land of meager living, cholera, smallpox, and faces "red and swollen" from the bites of clouds of mosquitoes. A 19th-century chief of Chiang Rai ate two meals a day of rice, chilies, and "dried putrid fish, diversified occasionally with an egg more or less nearly approaching a state of rottenness." The same chief today would be sated on all manner of delicacies, and would hardly worry about malaria, much less cholera or smallpox.

But equally well does Descriptions highlight the environment's deterioration. A French envoy visiting the Siamese King describes the King's "great and royal qualities, which like a most exquisite perfume have spread their aroma to the extremities of the earth." Modern Thailand's modern aroma of diesel exhaust is far less exquisite, yet all the more likely to spread. Writing in the 1920s, the Dane Erik Seidenfaden saw Bangkok not as "a desert of stones like so many American or European cities because here. . .the trees and the verdure dominate." He predicted that "the future will see Bangkok as a vast well laid out, park-like town intersected with a network of broad shady roads." Vast Bangkok is indeed, but now it has one of the lowest percentages of its area dedicated to parks of any city in the world, Europe and America included.

Seidenfaden, like his predecessors, could hardly have foreseen the changes Siam would undergo in becoming the Thailand of today. His optimism strikes us as quaint. But perhaps someone will one day pick up Descriptions of Old Siam and encounter these visions of what it could have been - and make it so.