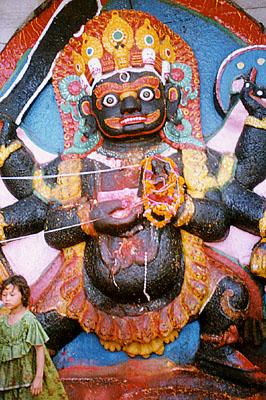 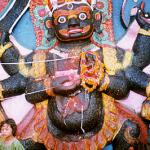 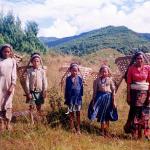 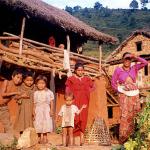 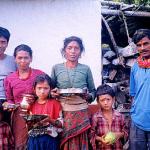 "In Nepal, a guest is like a god," says Hiranya, a boy who captured and brought me to his hillside village, so tiny it isn't on any map of Nepal or has a road wider than a goat path.

As a female guest from the independent West, I drink millet beer and play cards with the village guys. Meanwhile, Hiranya's female kin cook me feasts from their garden and rice paddies, followed by a trip to the guava tree for dessert. The women of the household work long past the sun's hours, tending to all the domestic duties as well as helping the men and boys in the fields.

Hiranya leads me through his forest, calling out ferns, firs, citrus groves and pipal trees like beloved possessions. The Himalayas peek out from the clouds like shy ghosts, silently shedding snow into the river below us. Bird twitters fade seamlessly into cicada sirens. The forest's song is a richly patterned fabric, thick with greens and flecked with reds, like this land itself. "We are a poor country, but rich in nature," my friend says, quoting a Nepali proverb with which many villagers console themselves.

Rich indeed. Nepal's diverse landscape supports 6,500 species of trees, shrubs and wildflowers; 800 types of birds; 40 ethnic groups; 20 languages; and a cast of exotic mammals, including the snow leopard and Gangetic dolphin. Geographically, Nepal is a baby's finger caught between two Asian giants, India and China, yet its climate ranges from tropical to arctic, its vegetation from rainforest to alpine desert.

Every fall, after the monsoons have left Nepal, tourists flood the country to live out Indiana Jones fantasies. Nepal's hardy visitors raft wild Himalayan rivers, stalk tigers in the Terai jungle, climb the snowy Annapurnas. In the process, they rain needed riches on the nation's lifeblood tourism industry.

Poverty sleeps in this paradise. Nearly half of Nepal's rapidly multiplying population is absolutely indigent, according to USAID Assistance for Nepal. Agriculture employs 80% of the people, though only a third of the land is arable. The resultant strain on the environment, economy and health care system is despairing to witness. Yet many Nepalese, both Hindu and Buddhist, believe it is their karma to be born into a lifetime of struggle and suffering, particularly for the untouchable caste, whose only hope is a favorable rebirth.

The Hindu pantheon embodies 333 million God-forms, from the feared blood-thirsty Kali to the beloved elephant-headed Ganesh, all believed to be creations of the one supreme being. Gods even grow in the garden, Hiranya explained as he sprinkled marigold petals and red tika dust onto a sacred basil plant.

Temple-goers bring flowers, food and light to living icons of their favorite deities. These statues, coated with a paste of colored powder, rice grains and milk sweets, are communal canvases for devotion. Offerings acknowledge that nothing is really ours; they give back what belongs to God.

Temples can be anyplace where such puja (worship) is made, whether grand buildings with triple-decker gold roofs and erotic wood carvings or small corner shrines sheltering (super)natural stones. Being a non-Hindu, I am not allowed inside any of the countless temples in Kathmandu, Nepal's capitol. But I am free to loiter on the steps of the temples, clustered in Durbar Square, where children play, homeless sleep and produce sells. To appease Kali, goats and chickens are decapitated at one temple altar. The sacred, sweet-eyed cow -- whose life is legally protected -- scavenges an icon's gifts and then hits up pungent mounds of trash for more.

Thamel, Kathmandu's profane tourist ghetto of souvenir stores, pie shops and guest houses, spans almost a mile of the small city. But even here one cannot insulate oneself from Nepal's growing pains. The pollution is so bad that many residents and tourists won't go outside without wearing gas masks. Ironic rows of candles illuminate Thamel's dozens of Internet centers during weekly power cuts, as well as frequent, spontaneous power outages.

After a few weeks in the hills, wild seem the city streets, especially Kathmandu's seedy yet polite edge. "Hashish, madam?" offers a young hustler, while a Nepali Romeo-in-training purrs, "Hey, DeeDeeee (sister), want to have a cup of tea?"

In the scramble of city life, Nepali strangers still welcome me like a sister. I return the standard greeting, "Namaste," with my palms pressed together, meaning: "The god in me salutes the god in you."