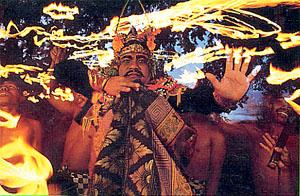 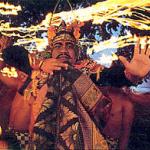 In the late 1980s, author Pico Iyer embarked on an Asian journey with the purpose of discovering to what extent Western - and especially American - culture had impinged on the cultures of the newly opened and revitalized East. During this time several Asian nations were undergoing unprecedented economic growth; the historic Nixon visit to China and the market reforms of Deng Xiaoping were beginning to drag China out of the darkness of Maoism; and Southeast Asia, after years of wars and insurgencies, was more or less at peace. Pundits, even Iyer himself, spoke of an Asian century to come, and no one could have foreseen that in less than a decade the Thai economy would tank, Japan's would stall, or that authors would suddenly be writing premature obituaries for the People's Republic.

In those intoxicating times, Iyer concluded that fears of Western hegemony over the East are unfounded, and that indeed the converse is more likely. He found that Asian cultures could easily absorb, refuse, or painstakingly select things Western. And moreover, that Eastern things were insinuating themselves into the West with astonishing subtlety and speed - from yoga and Thai restaurants, to feng shui and gamelan music, not to mention Japanese electronics or Indian software engineers. As I write this, a Western woman wearing a salwar kameez and dupatta sits down nearby and starts speaking fluent Thai.

Iyer visits several countries, one province (Bali), and one colony (Hong Kong) soon to be eaten by its rightful owner. In each he addresses a particular theme: Bali (spoliation of a once idyllic island), Tibet (masochism of travelers in search of Shangri-La), Nepal (hippie-haven becoming trekker-tractor-beam), China (xenophobia then and now), the Philippines (exuberant music and ghastly poverty), Burma (social Rip Van Winklism), Hong Kong (the vapidity of expatriate life), India (lights! camera! action!), Japan (Japanese baseball as metaphor for Japanese Westernization), and Thailand (take a wild guess).

Yes, alas, in Thailand Iyer addresses virtually nothing but bars and bar girls - a fact for which he has lately, in a review of John Burdett's sordid novel Bangkok 8, shown repentance. But his past obsession is hardly surprising, given that he followed the usual tourist's circuit: Bangkok, Chiang Mai, trek. But he seems helpless to avert his jaundiced eyes from the capital city, and all but a few paragraphs of his 30-page essay are dedicated to it. "Thailand offered a good deal more, of course, than just the sex trade," writes Iyer. Three paragraphs more, to be exact. He saw "almost no sightseers, no scholars, no hippies from Oregon or honeymooning couples from Manhattan". In other words, he did not see Sukhothai, a university, Pai, or Phuket.

As a teetotaler and seeming prude, he is "outraged" by the City of Sin - a common enough reaction, initially. But eventually he undergoes the usual cardiac flip-flop: "So why find shame in enjoyment," he asks, "and why take enjoyment in shame?" Why indeed. But perhaps it might be better to ask: Why identify a 700-year-old country of 60 million people with a few girls Iyer met on Soi Cowboy?

To be fair, Iyer is guilty of crimes common to all travel writers, myself included - namely, ignorance and presumption. They can observe and record, but they generalize at their peril. And even appearances can sometimes be misleading. Consider Iyer's slant on Burma. He seems to confuse the country's leadership - which has ruthlessly kept its people ignorant, scared, and poor - and its people, who (if the nullified results of the 1990 elections are to be believed) are quite fed up with their leadership.

"Burma is the dotty eccentric of Asia," he writes, "the queer maiden aunt who lives alone and whom the maid has forgotten to visit." This is but one example of Iyer's purple passages getting the better of his perceptions. Burma, he says happily, "was content to mind its own business and go its own way." Burma was "at peace." So, in a similar sense, was Cambodia under the Khmer Rouge, which also prevented tourists from visiting unsightly labor camps, imprisoned dissidents, war zones. Fortunately, a diplomat finally strips Iyer of his saffron-colored glasses, his celebration of "cultural innocence and integrity", and by the essay's end Iyer concedes that Burma is dying a "slow and terrible death".

Iyer's optimism distinguishes him from other popular travel writers, from the perennially truculent Paul Theroux, to the thoroughly humorless V.S. Naipaul. He is willing to portray people as ridiculous, but seldom as stupid or evil. His laughter comes at humanity's, and not any individual's expense. But sometimes his attempts at levity fall flat (as in his description of Orwellian Burma as a "queer maiden aunt".) Calling tourists collectively Homo touristicus is another example, as is saying that "Kathmandu seemed a Shantih-town" (shantih being his transliteration of the Sanskrit word for peace.) At one point he even mentions the "fast-and-Luce rhetoric" of India Today, a Time lookalike, and I doubt whether most readers will know that he is referring to Henry Luce, the latter magazine's founder, a fanatic son of missionaries who sought the wholesale conversion of China to Christianity.

But if sometimes Iyer is too clever by half, his eye for the telling detail or the mot juste is extraordinary. He notes that Thai hookers commonly - poignantly - adorn their rooms with "three-foot-tall stuffed animals, with cartoony faces and silly smiles", and that many of them lie to their parents about their occupations, a contrite pragmatism for which they seldom get any credit. Though describing China, Iyer could be describing any country subjected to the inhuman urban planning of Communism when he writes: "In front of me in the bright afternoon was a vast square, ringed by giant billboards and graying skyscrapers. Beside me, extending for block after block after gray, gray block, was the main body of the station....All around was vastness and great vacancy." To convey the common pathos of Asians trying to impress Westerners with their stylishness, he shows Chinese youth screaming "Disco!" and "Break dance!" at him while "turning themselves into human spaghetti"; and Filipinos singing, with John Denver, about going home to West Virginia and their mountain mamas. (Thais do this too.) Singapore? "McCity," says Iyer. And he correctly identifies "the sound track of Indian life" as "the shrill, squeaky lilt of a woman's voice delivering movie songs".

In a veritable paroxysm of clichi, a critic for the New York Times has apparently called Iyer's book a "magical mystery tour through the brave new world of Asia." But I wonder how magical, mysterious, or indeed new this Asia is. Hindi films have been around for decades, as have Chinese xenophobia, ruined Bali, poor Burma, Thai brothels, and Hong Kong Brits sipping gin and disparaging their (increasingly Filipino) maids. East-West cross-pollination is older than Pico Iyer. It is older than Marco Polo. And how old it is all depends upon what you mean by East and West.

The Greek Herodotus wrote about India in the 5th century BC. Okay, so he said that the semen of Indians was black and that they were plagued by ants "bigger than foxes", but he also noted their distaste for killing animals and their preference for solitary deaths in the wilderness - traditionally, the last stage of an orthodox Hindu's life. Iyer implies that Thais are licentious ("'Everyone makes love,' cooed sweet-smiling Nitya") and he writes that the "Burmese seemed an uncommonly jolly and guileless people, not veiled or stealthy as other Southeast Asians could be". In such statements it is easy to recognize a similar mixture of half-truth and Orientalism ("veiled", "stealthy") that prompted Herodotus to say that all Indians "mate together in the open like the brute beasts" or that none of them "has the least concern for the sick or the dead."

Where the 'twain too often meet is in mutual misunderstanding. But one must take what understanding one can get, and there are far worse guides through our globalized inferno than Pico Iyer - polyglot, polymath, occasional Polyanna.

Review of Pico Iyer's Video Night in Kathmandu: And Other Reports from the Not-So-Far East, Vintage Departures, 1989.