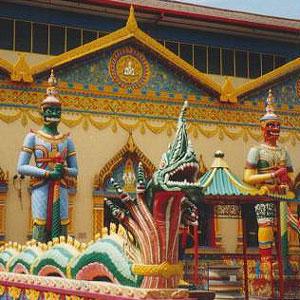 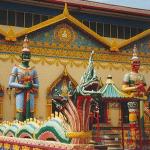 With so many things to do, see and eat in Penang, it is not surprising to find that time simply zip past us during a holiday there. Malaysia's Pearl of the Orient is famous for its sandy beaches and everlasting sunshine. Most visitors prefer to bask in the sun, surf and enjoy a bout of water sports such as jet-skiing or parasailing. Towards the evenings, many will head on down to town to sample the mouth-watering Indian curries, or the many seafood dishes and grilled meats. Over at another part of the island, a visitor can try out the Canton and Fuzhou specialties or even taste the delicious Baba & Nyonya food served in refurbished colonial-style buildings. There are also al fresco food stalls on the famed Gurney Drive. For those who are not keen on getting a tan can check out the famous bird park, butterfly farm or feast their eyes on Georgetown, the historical city.

I have been to Penang many times in the past few years and each trip is made up of beach fun and food fest! Only a four-hour drive from Kuala Lumpur via the North-South Expressway, it is easy for us Malaysians to take the island for granted. However, on my last trip back, I had to entertain a friend who came from the States and that was the very first time I visited one of Penang's "most commonly missed" attractions - the religious structures.

Penang is a land thick in culture and religion. There could be no other place in the country that can dish up so many attractions within a small area. Therefore, for the history enthusiasts, spiritual seekers, or just a tourist bumming around, you have got to give Penang's religious spots a chance. Check out the interesting temples, mosques, and churches. The variety is amazing and most of these structures date all the way back to the 1800's where Hindu temples, Buddhists wats and Chinese place of worship converge on a tiny island and brings forth various religions such as Taoism, Confucianism, and Buddhism.

A peek behind the temple seemed to bring the visitor to another land as therein lies a Thai cemetery and a small Thai village. The local Thais who dwell there follows the Buddhist festivals closely and celebrates the Sonkran and the Loy Krathong, both which are traditional Buddhist festivals. There are also urns behind the statue that carries ashes of devotees. If you are interested in viewing the Temple of the Reclining Buddha, you may do so for free.

A Church and A Mosque
In terms of history, there are two more structures that bear more meaning to the locals. St. George's Church and Kapitan Kling Mosque were both built in the early 1800's. Do you know that St. George's is the oldest Anglican church in Peninsular Malaysia? Well, yes it is. In fact, this place was built in the year 1818 and this is also the same spot where the founder of Penang, Francis Light, was buried many years ago.

As for the Kapitan Kling Mosque, I am not sure of the exact date where the building was established but it was some time around the early 19th century. Named after an Indian merchant who is a Muslim, the mosque is a handsome architectural piece with a yellow front and dome-shaped minaret that is very much the common designs for mosques in Malaysia. This look reflects the Islamic influences from North Africa. Unlike a Buddhist temple, when visiting a mosque, tourists must be appropriately dressed. So very short skirts, shorts, slippers or revealing tops are a big no-no. You must also obtain prior permission before entering the building.

Home of Lord Subramaniam...
From Buddhism to Christianity and to Muslim, we now take a look at the oldest Hindu temple in Penang. The Sri Mariamman Temple was completed in the year 1883 and is a bright and gay looking temple as the place is filled with various colorful statues of Hindu deities. However, the main attraction at the Sri Mariamman Temple is without a doubt Lord Subramaniam, a priceless statue that is decorated in gold and precious stones such as diamonds and emeralds. The statue of Lord Subramaniam has always and is still the center of worship throughout these years. It is especially so during the annual Hindu Thaipusam Festival where the statue will be brought through the city streets at Jalan Waterfall, riding on a chariot that is carried by Hindu devotees. Please acquire prior permission before visiting the temple. Permission is obtainable from the temple officials. Should you wish to visit the temple, it is recommended to see the place either early in the morning or late in the evenings.

Not For The Faint-hearted!
This has got to be a one-of-a-kind temple. It is located in Sungai Kluang, near the airport. Built sometime around 1850 in memory of a Buddhist monk/priest who moved to Penang, the Snake Temple has attracted many people from all over the country and out of the country as well. Visitors/believers from as far as Singapore and Taiwan would congregate at the temple during Chor Soo Kong's (the monk) birthday, which incidentally falls on the sixth day of the first lunar month.

It didn't start out as the Snake Temple. Previously, it was known as the "Temple of the Azure Cloud" - a name which was meant to honor the clear blue skies of Penang. However, in time and with its unique residents, the name was changed to the Snake Temple.

The unique point of this Snake Temple is as the name suggests. The temple is filled with not just smoke from burning incense, but also with a variety of pit vipers. It is believed that these snakes are rendered harmless by the sacred smoke, but you do not have to worry what happens if the smoke from the incense fails to "perform as claimed". For precaution sake, these snakes have been de-venom. Many cannot understand how the snakes got there, but the local devotees believe that the snakes came to the temple by choice. The story goes like this. Apparently, this monk had given shelter to the snakes of the jungle and when the temple was completed, it is only natural that the snakes moved in with him. Currently there is a statue of this deified healer in the temple, having been brought to Penang by a fellow monk from China. If you want to capture a shot of yourself holding one of these snakes, you can do so for a small fee. Although I must warn you, this place is not for the faint-hearted.

This temple was built in honor of two Chinese goddesses: Kuan Yin Teng (the goddess of mercy) and Ma Chor Poh (patron saint of sea travelers). The impressive structure has a statue of the Goddess of Mercy sitting on an inner chamber, depicting a serene-faced woman with 18 arms. From the outside, you can see stone sculptured lions guarding the temple grounds whilst the inner sanctuary with its high roofs are being held up by impressive dragon pillars carved out from a green stone. The goddess Kuan Yin is highly revered by the believers because of her sacrifice. According to the Chinese legend, she forgo her privilege to enter eternal bliss after having attained Nirvana and chose instead to stay back and help lost souls in the world of suffering. Her sacrifice was worshipped to this very day...

Most Beautiful Temple in Southeast Asia
Of course, if you are not the type who enjoys checking out religious places or perhaps simply do not have the time for it, I must ask you to at least try to put Kek Lok Si Temple in your agenda. This must-see temple is located in the Penang township of Air Itam. There are excellent photo-taking opportunities here as Kek Lok Si Temple is the largest and most beautiful Buddhist Temple in the whole of Southeast Asia. Standing atop the Ayer Itam Hill overlooking the temple is a huge statue of the Goddess Kuan Yin.

The Kek Lok Si Temple was built in honor of the Bodhisattva Tsi Tsuang Wang. Bodhisattva Tsi Tsuang Wang is another saint who chose the same path as the goddess of mercy, choosing to remain where he was to help the needy souls instead of moving on to a world of eternal bliss. The construction of this temple took ages, beginning from 1890 and was not fully completed until 1930. For those who are familiar with Chinese, Thai and Burmese architecture will know that the Kek Lok Si Temple is a combo of all three. Its amazing architecture starts with a typical Chinese temple look with its octagonal base. The middle section of the temple shows a distinctive Thai look. The top dome is definitely Burmese. It is hailed as the most beautiful temple because of the lovely garden and other sculptures found within it. There is a beautiful maze of gardens, shrines, expert crafting of figures taken from Buddhist mythology, a giant turtle pool and the awesome seven-tiered 'Pagoda of Ten Thousand Buddhas'.

You can see artistic talent and colors emitting from every nook and corner of the temple. The murals of Chinese gods with rows and rows of Buddhas lining every wall is widely appreciated. You will also see many rooms filled with the smell of incense while the devotees kneel in prayer. If your health permits it, why don't you take a climb all the way up to the temple? The breathtaking view greeting you from the top of the temple promises an unforgettable experience. There is also a lovely treat for visitors to the temple. Visitors will have the opportunity to enjoy a vegetarian meal at the air-conditioned restaurant located just outside the temple gate.

You may visit the temple any time from 9 am to 5 pm daily. Overall, if you are in Penang and have not visited any of these religious places, perhaps it is time for you to take a break from the sun and check out some historical structures instead. It could prove to be an eye-opening experience.