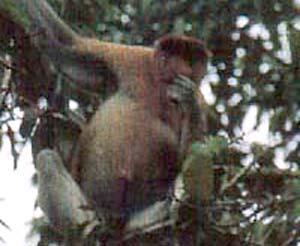 The Dutchman of Borneo 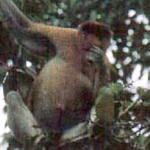 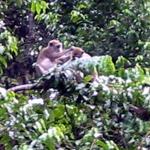 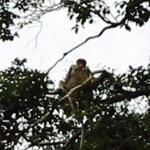 Deep within the forests of Borneo, along a route Chinese traders used to obtain highly treasured shark fins and bird's nests, ancient explorers came across a most startling sight. Hanging from a tree branch was one of the weirdest primates they have ever seen! Pot-bellied, furry and cute, its orange-gold fur and body resembled that of a monkey, but it had the most amazing face that is almost entirely alien to the explorers. Two intelligent, human-like eyes stared at the explorers over a grotesque pendulous appendage which overhung the mouth. For seconds, this weird animal stared at the explorers, before suddenly fleeing into the tropical rainforest. The weird animal leaped from branch to branch with the agility of a gymnast and a kind of grace which belies its clumsy appearance.

The bemused traders brought home with them stories of this animal with grotesque anatomy too hideous to describe, adding an aura of mystery and fascination to the island of Borneo.

One of a Kind

A unique and clever animal native to the island of Borneo -- Sabah, Sarawak, Kalimantan and several smaller surrounding islands, the Proboscis Monkey (Nasalis larvatus) was named after its exceptionally large and pendulous nose. This bizarre looking creature is found nowhere else in the world, thus constitutes a valuable part of Borneo's natural heritage together with its more famous cousin, the Orang Utan. One of the best places to spot this magnificent primate in huge numbers is at the Menanggul River, which is a tributary of the Kinabatangan flood plains. Known as the Sukau Forest Reserve, this place is accessible by taking a cruise along the main Kinabatangan River before diverting into the Menanggul tributary. Sukau Village is approximately two and a half hours from Sandakan town, along a scenic but winding road.

These animals feed predominantly on mangrove (Sonneratia) leaves, small fruits and sometimes the buds of Nypa palms. In the five cool hours of the day each adult may munch up to 1,800 of the bitter tannic mangrove leaves, which it is equipped by nature to digest. Their partitioned stomach is equipped with fermentation chambers in which, as with cows, the digestion of leaves is facilitated by special bacteria. Unlike other primates, these monkeys cannot eat fruits or any other sweet things as such food cannot be digested and can kill them.

Because of the large quantities of leaves they need to consume -- the animals require plenty of protein to swing from tree to tree - their bellies are always extended, giving the animals an appearance of being perpetually pregnant. It is not their intestinal tract, though that fascinates us but their grotesque facial features.

While they all have red hair, the male is nearly twice as large as the female, pot-bellied, and possesses a huge honker of a snoot: The nose, particularly in males, has developed into an oversized organ which, besides being used in sexual display, also functions as a voice amplifier. Scientifically speaking, the male Proboscis Monkeys have large noses because they provide a large surface area from which to lose excess body heat in the humid warmth of the tropical swamps. This organ is so large that, during feeding, the monkeys have to push it aside with one hand!

When the troop is settling down for the night they shriek loudly at each other and when fleeing from predators in panic, the mature and dominant release trumpet-like yells to scare away any pursuer. During these warning calls the red nose - which dangles placidly at other times - swells grotesquely into a horizontal position. In younger males and adult females, the nose is much smaller. The noses of non-dominant males belonging to tribes with another dominant male proboscis with not develop the large nose.

Despite its fearsome appearance, the Proboscis Monkey is a gentle and sensitive creature, congenial and averse to unnecessary confrontation. When confronted and if its yells are not enough to scare away intruders, the monkeys will flee. Proboscis Monkeys live in two types of groups -- the bachelor group and the harems. Bachelor groups will consist of around five to ten male monkeys with no dominant leaders. Such groups do not usually interact much, with each monkey finding its own food and taking care of itself but the group will explore the forests together. The harem group, on the other hand, will never be accepted by the Women's Liberation Movement!

A dominant male will be the "head of the family", becoming a master of about 10 females and their babies. The dominant male will try to father as many children as soon as possible, for older adult males will be displaced by mature males from the bachelor groups. When this happens, the formerly dominant male will be banished from his harem and all dependent infants in the harem will be killed by the victorious male. This is done by the new dominant male in order to get the female monkeys pregnant with his offsprings more quickly.

The way Proboscis Monkeys take care of their young is also rather unique. All mothers within a family group with dependent toddlers will take turns to take care of the young toddlers while the other mothers hunt for food.

Water is Good For You

Another unique characteristic is their unusual affinity for water. As such, the monkeys can be found along river banks along the banks of rivers or inland lakes. Late evening is the best time to see the monkeys by taking a relaxing cruise. The monkeys will all gather along the river and swing around, choosing a suitable location to nest for the night. They usually keep to the trees, but occasionally have been seen taking a dip into a river, or even swimming across to the opposite bank. During our cruise along the Kinabatangan River in Sabah, we even saw several toddler-monkeys falling into the river as they tried swinging unsuccessfully across the river banks! They do not come to much harm though, as these monkeys have webbed feet that make them naturally good swimmers. In no time at all, the terrified toddlers swam to the banks and climbed up the trees again.

They need to be because the primates sometimes have to cross the river two or three times a day to search for food. They are also good divers and can swim underwater as far as 20 meters. It is not uncommon to see proboscis monkeys wading through waist-high water to cross a stream or to get away from a predator.

The Malay name for the Proboscis Monkey is the most amusing. Local Malays call this monkey a "Dutch Man" - presumably a reference to the red, swollen noses of the males which could be said to resemble the sun-burned noses of the white-skinned colonialists.

"Please Do Not Capture Us!"

They are not hunted much as the Orang Utans as they have proved impossible to keep in captivity, no matter how lush or lavish their living area is. Most Proboscis Monkeys die soon after capture -- literally starving themselves to death even in large enclosures, so they are left pretty much to themselves. Because of this, the monkeys cannot be seen in zoos and they receive much less attention compared to other primates. Today, due to logging activities, the population of Proboscis Monkeys is dwindling at an alarming rate. In 1977, there were an estimated 6400 in Sarawak compared with about only 1000 now. They are found mostly in the Samunsam wildlife sanctuary and the Bako National Park near Kuching. In Sabah, there are about 2000 left around the Kinabatangan River. With the urging of Worldwide Fund for Nature (WWF) and other organizations, the Malaysian government has declared many Proboscis Monkey habitat areas as forest reserves in order to protect the monkeys.

The Kinabatangan flood plain, recently declared a forest reserve and world heritage site, supports a huge number of the Proboscis Monkeys and other interesting wildlife. It is also Malaysia's largest forest-covered alluvial area. There are 10 species of monkeys here. Many birds native to Borneo reside here, placing this wildlife sanctuary as an A-plus rated destination for bird watchers. Other wildlife found in the area is Orang Utans, Asian elephants, Samba Deer, Estuarine Crocodiles, Painted Terrapins and a host of migratory birds.

Without adequate protection, these animals are vulnerable to being endangered species. Pockets of unlogged areas in the Kinabatangan flood plains are home to the low-land dipterocarp forest which is a natural habitat for the famed celebrity of Borneo - the Orang Utan. Five types of forest are found throughout different levels of the Kinabatangan flood plains supporting the growth of hundreds of plant species. Limestone hills and caves, where swallows' nests are sought for trade, make the flood plain an irresistible draw for ecotourism. Will conservation efforts be enough to erase years of destruction? Only time will tell...

Under the New Wildlife Protection Ordinance, anyone who kills or hunts down the Proboscis Monkeys and Orang Utan is liable to be jailed for two years or fined a maximum of RM 30000.