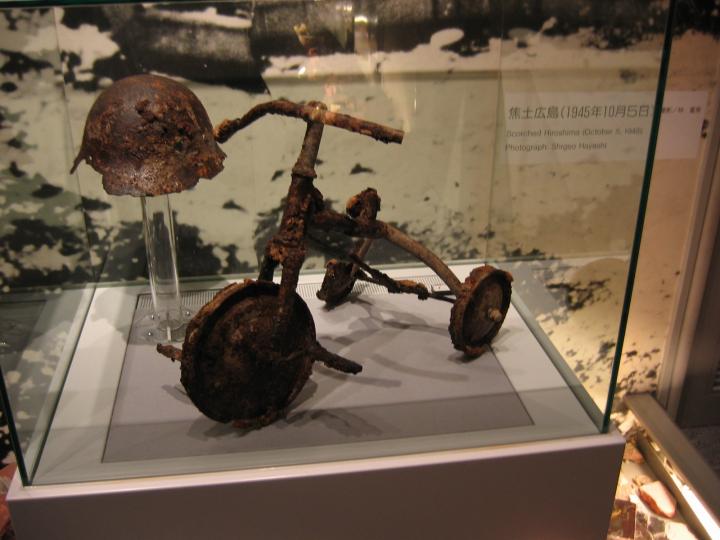 After the bombing of Hiroshima a father buried his son with his tricycle. 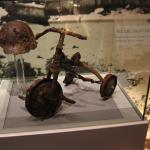 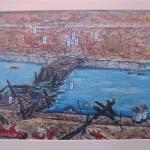 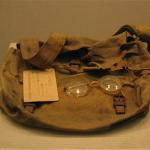 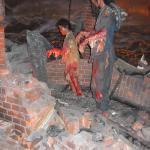 At the Peace Memorial Museum in Hiroshima Japan, people whisper or speak in soft tones.  The space seems almost sacred. The museum tells the story of the horror visited on Hiroshima on August 6, 1945 when the United States dropped the atom bomb on that city to end World War II.

The museum’s exhibits explain why the United States felt it needed to take the drastic action it did. They also include acknowledgement by the Japanese people that their own war record was brutal. They admit they committed atrocities in many countries they conquered. “The Japanese were not blameless victims,” says one museum display board.  I learned many new things at the museum but I think what will remain with me the longest are some unforgettable visual images.

A rusty tricycle sits in one display case. It belonged to a three-year-old boy who was riding it when he died. His father buried the tricycle with his son in his family’s front yard on August 6. Because there were so many dead people in Hiroshima there was no time for proper funerals or burials. I took a photograph of a pair of gold wire frame glasses and a textbook bag that belonged to an elementary school teacher, Mrs. Koharu Hirakawa.  She was on her way to work the morning the bomb dropped. The glasses and tattered school bag were found with her body.

There are photographs of people walking the streets of Hiroshima, right after the bombing, their bodies burned and black.  Shredding skin is hanging down from their hands and arms. Photographer Yoshito Matsushiga who took many of the pictures is quoted as saying, “ I fought with myself for thirty minutes before taking the first photo. After that I grew strangely calm and could take one picture after another. The only problem was my viewfinder kept clouding up from my tears.”

People who were living in Hiroshima on August 6, 1945 were invited to submit pictorial renditions of their experience in 1974, the 30th anniversary of the bombing. Nearly 4000 art works were collected. One currently on display at the museum is a colorful painting by a woman named Yasuk Onishi who was 13 in 1945. Her painting shows her sitting on a riverbank her head in her hands. She was at school when the bomb fell and ran as quickly as she could to her home. Her house stood over a bridge across a river. Her painting shows the bridge burned and broken. Her house has simply disappeared. Yasuk realizes her parents and her two little sisters must be dead  so she sits down at the water’s edge and begins to weep.

In the museum’s Memorial Hall a huge screen shows photographs of many of the 100,000 victims of the bombing. The photographs fade in and out on the screen so eventually you see them all. It is sobering to stand there as face after face emerges and then disappears.

Outside the Hiroshima museum is a river walkway called The Peace Promenade. It is lined with various monuments and memorials. One is called The Bell For Peace. Beside a huge metal bell a sign says, “May this bell ring to all the corners of the earth and make every person long for peace. Step forward friend and ring the bell for peace.” As one visitor after another steps up to pull the rope and make the bell ring it provides a clear, loud and hopeful background sound that contrasts fittingly with the somber hush inside the Hiroshima Peace Museum.