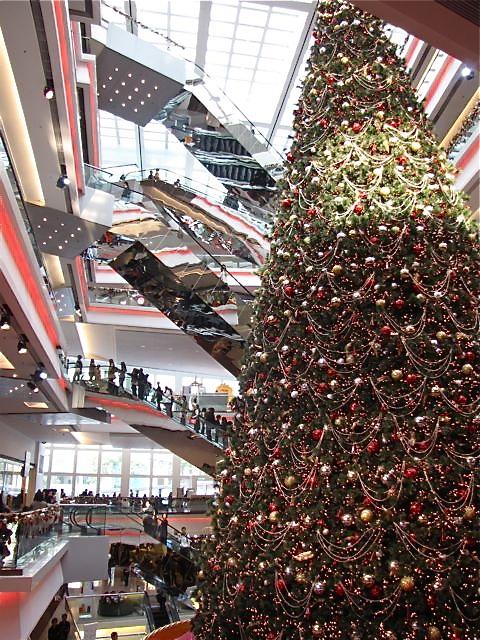 The floor to ceiling tree in a Hong Kong shopping mall 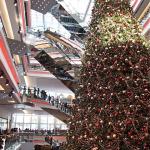 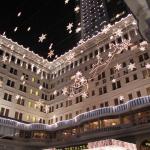 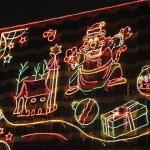 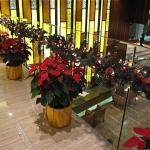 You know its Christmas almost everywhere you go in Hong Kong in December. Stores are awash with colored lights and tinsel. Christmas music both sacred and secular is piped into train stations, malls and government buildings. Poinsettias are much cheaper than in North America. Last Christmas, seventy- five plants graced the lobby of my apartment building. Parents at the school where I work donated a hundred poinsettias to decorate our performance theatre for the seven different Christmas concerts our music department staged.

Hong Kong shopping malls spend millions of dollars on Christmas decorations, vying with each other to create the most extravagant display. The fashionable, hot color for Christmas decor this year in Hong Kong was purple. Entering one mall that had purple decorations festooned in glitzy, ostentatious bunches every someone remarked, “It looks like Christmas threw up in here.” Indeed a letter to the editor in the South China Morning Post right after Christmas deplored the money wasted on decorations and the amount of garbage that was created when those decorations were thrown away after the holidays.

Hong Kong was a British colony for over 150 years so celebrating Christmas became a tradition. The holiday intrigues and excites main land Chinese people who know little about Christmas. Ever since Hong Kong became part of China in 1997, main land Chinese have swarmed over the border into Hong Kong in droves in December to listen to carols, eat candy canes, sit on Santa’s knee, go to the Nutcracker Ballet, shop at Christmas sales and marvel at the Christmas lights which cover virtually every skyscraper on the Hong Kong harbor from top to bottom. They come to visit Hong Kong’s Disneyland and watch the Disney Christmas parade. One wing of the building where I live is a hotel, and up to a dozen busloads of Chinese tourists check in every night in December. By 6 am when I leave for my morning walk to work, they are awake and lined up waiting their turn to have their picture taken in front of the Christmas tree in the lobby literally sagging beneath the weight of its decorations. It has dozens of fake presents carefully arranged beneath it.

Not many Hong Kong families get together for Christmas. That’s saved for Chinese New Year, when there can be up to 15 days of holidays; a much longer time free for travel to see loved ones. Chinese New Year is also when gifts are given. My students are already speculating how much money they will collect in the red packets their relatives and parents’ friends will present to them for Chinese New Year. Christmas in Hong Kong is for shopping, but not really for gift giving. Virtually all the stores, restaurants, theatres, and malls are open on December 25th and January 1st.

Less than 3 million of Hong Kong’s 7 million citizens claim any faith affiliation and of those, over a million are Buddhists or Taoists, just half a million are Christians. Christmas is only celebrated as a religious holiday by a small minority of the population. I suspect most of the people hearing Old Little Town of Bethlehem on the taxicab radio or Hark the Herald Angels Sing in the grocery store check out line, have absolutely no idea what the lyrics are about.

Christmas is definitely a noted and commercial holiday in Hong Kong. While you can certainly say it ‘looks like Christmas’ in Hong Kong in December, Christmas is not the same as in North America.

The Streets of Hanoi