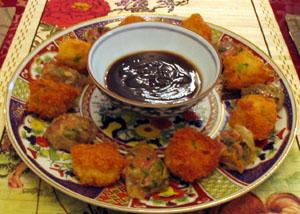 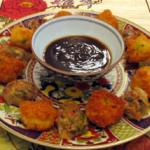 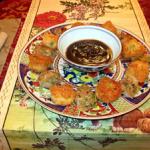 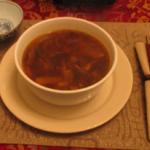 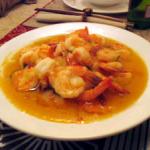 Using a cleaver, finely mince the shrimp until it forms a smooth paste. In a large bowl, combine the shrimp paste, minced water chestnuts, egg scallions, ginger, garlic, cornstarch and salt. Mix thoroughly. Place the bread crumbs in a shallow mixing bowl. Using a tablespoon, scoop the shrimp mixture one spoonful at a time into the bread crumbs and toss lightly with your fingers to coat and form a ball. Remove each piece from the bread crumbs and set aside on a plate until time to fry. Pour 1" of vegetable oil in a large wok or skillet and place over high heat. Test the oil temperature with a small drop of the shrimp mixture. The oil is ready when the test drop sizzles. Carefully slip each coated ball into the oil, but do not overcrowd the pan. Fry until golden brown, turning once. If desired, serve with commercially prepared Hoisin Sauce for dipping. (makes about 18 croquettes)

Warm the rice wine in a saucepan or microwave and soak the dried mushrooms in it for 15 minutes. Heat oil in a large soup pot. Stir fry the ginger, onion, rehydrated mushrooms, and bamboo shoots until tender. Pour in the vegetable stock and any leftover rice wine from the mushrooms. Add soy sauce, vinegar and chili paste. Bring to a boil and simmer for 5 minutes. The amount of soy sauce, vinegar, and chili paste may be adjusted to individual taste to make the soup more or less hot and sour. (serves 4)

Combine the rice wine, soy sauce vinegar and cornstarch in a small bowl or cup and blend until smooth. Heat the oil in a saute pan or wok. Stir-fry ginger, garlic and scallions 2-3 minutes, until tender. Add the chili paste and stir to blend. Pour in the cornstarch mixture and stir thoroughly. Add the stock or water and simmer until slightly thickened.

Heat the oven to 400 degrees. Place the fish on a non-stick baking sheet or roasting pan. Bake for approximately 20-30 minutes (depending upon size). When the fish is halfway done, baste with 2 tbsp of the sauce to coat the skin. Remove from the oven, serve on a large plate and spoon the remaining sauce over the fish. (serves 2-4)

Peel and devein the shrimp, leaving the tails intact. In a small saucepan, Boil the shells in 1 cup of water for 5 minutes to make shrimp broth. In a mixing bowl, combine the salt, cornstarch, garlic, ginger, scallions, chili paste, sugar and rice wine. Mix thoroughly. Add the shrimp and marinate for 30 minutes. Heat the oil in a large skillet or wok. Stir-fry for about 5 minutes, until shrimp turns pink and tender. Add the shrimp stock and simmer until slightly thickened, being careful not to overcook the shrimp. (serves 2-4)

Place the chicken pieces in a large crockpot, electric wok or other slow cooker. Combine the soy sauce, sesame oil and rice wine and pour over chicken. Simmer on low heat for 4 hours. Remove the chicken from the crock pot and place in a baking dish. Heat the oven to 400 degrees and bake the chicken until skin is golden brown, about 1/2 hour. Transfer the sauce from the crockpot to a sauce pan. Stir in the cornstarch and simmer until thickened. Place the chicken on a serving dish and pour the thickened sauce over it. (serves 4)

Heat the oil in a large wok or skillet. Stir-fry the pork with garlic and onion until lightly browned. Add the carrots and celery, and stir-fry until tender. Add the bok choy and stir-fry until tender. Add the soy sauce and stock, stirring the meat and vegetables to mix thoroughly. Stir in the cornstarch and simmer until slightly thickened, being careful not to overcook the vegetables. (serves 2-4)

Heat the oil in a large wok or skillet. Saute the garlic, ham, peas, carrots and scallions until tender. Stir in the soy sauce and pineapple. Add the rice and toss until thoroughly mixed. (serves 4)