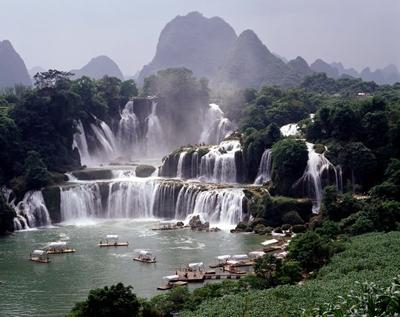 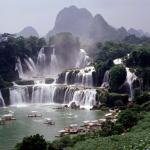 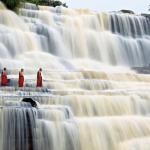 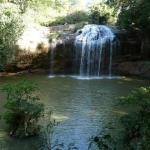 Lam Dong in general and Dalat in particular also possess many other beautiful waterfalls. Each of those is featured by unique and distinctive beauty that attracts lots of visitors. You can go for sightseeing and also can participate in interesting activities which can only be found in Da Lat.

Of many Dalat waterfalls, there are four that stand out the most. You can make a day trips to visit three of them. From your hotel in Dalat, just take a shuttle bus or taxi, the farthest is only around 10 km away.

Cam Ly Waterfall is located by Cam Le Spring, over 2 kilometers to the west of Dalat city. If you have chance to visit the city, you will be impressed by the landscape of the marvelous waterfall surrounded by pine trees hills. The Cam Ly waterfall is formed by two branches of Cam Ly Spring interrupted by big blocks of granite rock. This waterfall is 30 meters high and is very well-known in Dalat. The waterfall has been the topic for poetry and painting for its poetic and charming beauty. Lengend has it that the name Cam Ly is originated from K'Ho people. When the Cam Le River cross a village of the Lat people, local people had taken the name of the K'Ho chieftain named K'Mly (this word also sounds like Cam Ly) to give the Cam Ly Waterfall today. They did so in order to honor the merit of the chieftain and thanked him for maintaining a peaceful and happy village. Formerly, Cam Ly waterfall is attached with a nearby pine forest which is no longer exist now. In dry season, the waterfall is lack of water, but in rainy season, the water flows very strong and creat the marvelous Cam Ly for tourists to visit.

Prenn Waterfall is situated right at the foot of Prenn Pass, 10 kilometers from the center of Dalat city. According to the language of Cham people, Prenn means "the land of invasion". From Ho Chi Minh City to Dalat, tourists must go through Prenn Passs which is 10 kilometers long. This waterfall looks like a water-curtain pouring from 10 meters high down to a small valley which is surrounded by lots of flowers and pine hill. There is a small bridge which acrosses the lake. Tourists can visit the zoo, the orchid garden or stroll around to admire the colorful flowers or the small hutches built on the trees. This is a garden of rock named Thai Duong which will surely bring visitors interesting feeling. Especially, with the hanging cable system, tourists will feel like they are stepping into a fairy world when observing the waterfall from the cable.

Pongour Waterfall lies within the area of Tan Hoi commune, Duc Trong district, Lam Dong province, 45 km from Dalat city and 20 km from No. 20 Highway. Pongour is regardeded to as "the No. 1 waterfall of the south". This is one among the most beautiful and marvelous waterfall in Central Highlands with the height of 30 meters. Legend has it that Pongour waterfall is attached with Ms Ka Nai - a beautiful chieftain who had great contribution in making K'Ho people's life happy. It is said that the Pongour Waterfall today is the trace of the four rhinoceros of Ka Nai. Many years recently, if you visit Pongour in the fullmoon day of the first lunar month, you will have chance to take part in a festival when many traditional games, cultural rituals take place. The waterfall is now under the management of Ð?t Nam Limited Company.

Bopla Waterfall is located in Lien Dam commune, Di Linh district, Lam Dong province, about more than 8 kilometers from Dalat city and 25 kilometers from Bao Loc commune. This waterfall has another name, "Ivory waterfall", which is very high with original beauty. Bopla waterfall lies between two hills which are shaped like the kneeling elephants. It lookes like a grotto with the surrounding landscape and houses. Under the waterfall lies a small lake with big rocks around. Since the year 2000, Bopla waterfall is taken into the management of Dalat Tourism and Service Company.