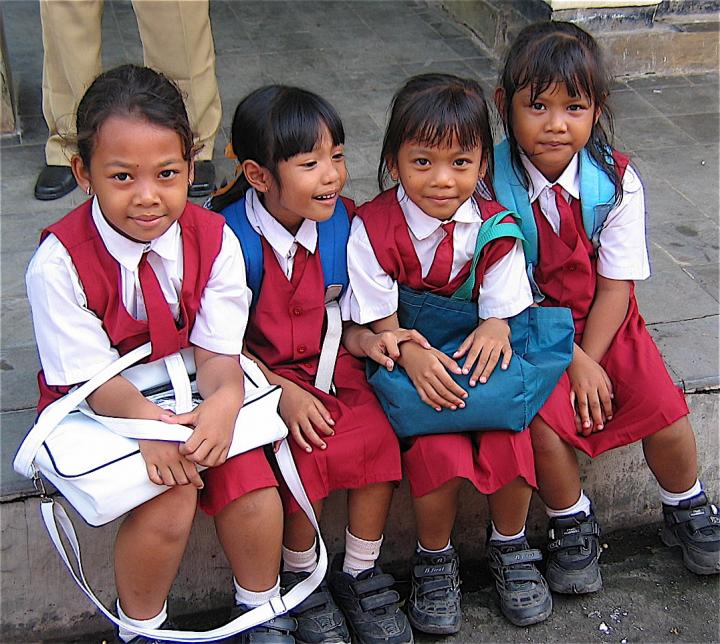 Little girls greet me as I enter an elementary school in Bali. 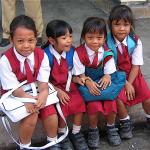 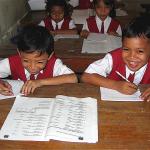 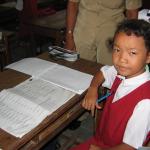 "See you next time! See you next time."  I'm cycling away from the grounds of an elementary school in Bali. I hear the children shouting and turn around to see a half dozen smiling faces peeking over the high wall around the schoolyard.  Some little boys have climbed to the top of the brick partition to say goodbye to me one more time.

I was on a bicycle tour during my recent visit to the Indonesian island of Bali. I told my guide I was a teacher and wondered aloud if it might be possible to visit a school. " Of course", he said and took me to the Sekolah Dasar Negeri Primary School in a nearby village.

The school consisted of six classrooms with doorways that opened onto a central courtyard. The teachers were all dressed in khaki uniforms. They spoke English fairly well. One woman told me teachers are government employees and get paid a basic minimum wage for their work. Each classroom held about forty children seated at simple desks. There were no books in the rooms, no pictures on the walls and no lights. A naked bulb dangled from one ceiling. I inquired why it wasn't turned on and the teacher replied, "doesn't work." Apparently the children were taking some sort of test because in every room they were sitting quietly at their seats with a paper booklet on the table in front of them. They were all copying something into their notebooks. I marveled they could see what they were doing since only a little light filtered in through the open door and the few windows. The children were very well behaved and worked quietly while their teachers stood out in the courtyard visiting with one another.

I asked if parents had to pay for their children's education in Bali and was told it is free of charge for the first five years. Families even receive money for books and uniforms.  I had seen some children walking to school carrying their shoes.  Apparently the government gives them money to buy one pair every two years. They think their shoes will last longer if they don't wear them outside the school building. Despite the government's best efforts many young children don't attend classes, because parents keep their children at home to work in the fields or do some other job to help support their family. Indeed as I continued on my bike ride I saw many children herding ducks and geese, planting rice, doing laundry in streams and rivers and caring for younger siblings.

Junior and senior high schools in Bali charge tuition fees and are only located in certain villages, so often children don't attend because the commute to the nearest school is simply too far.

The children were dismissed for recess just before I left and they crowded around me, posing as I took pictures of them and following me wherever I walked. They were all so happy, talkative and charming in their immaculate burgundy and white uniforms.

One of the teachers asked me how much money I made as a teacher in Hong Kong  and I was embarrassed to tell them what a high salary I receive. I wondered what these teachers would say if they could see the technologically equipped, beautiful large building in which I teach and my small classes of twenty or so students.

The children knew a few English words and they waved and chanted, "See you next time" as I left. How I would love to go back next time, with boxes full of storybooks, cartons of crayons and maybe even a few light bulbs that work.