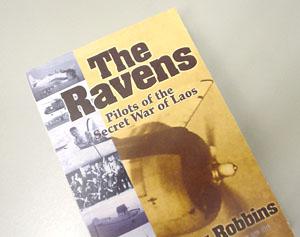 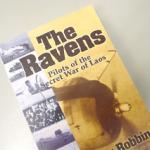 As long as the dull jingoist Tom Clancy continues to be a best-selling author, there is not much hope that America's predominantly peace-loving civilian population will be known to the world. Instead, America will be the world's tough guy, strutting onto the stage in order to batter puny enemies in the name of much vaunted, but steadily eroding American freedoms.

But Clancy is not my quarry here. Instead it is a book, Christopher Robbins' The Ravens: Pilots of the Secret War of Laos, which has been given Clancy's influential imprimatur. "Here," writes Clancy on the front cover, "are the heroes no one ever told you about." Well. 'Heroes' is rather a strong word for those responsible for (illegally) dropping some 1,600,000 tons of bombs on a nation justly called "the most peaceful in the world" by its former King Savang Vatthana.

The book's back cover also carries a number of unfortunate, if not sickening declarations: for example, that the book is "a thriller-war adventure with one significant difference: everything that Robbins reports actually happened." How reassuring. Yes, ladies and gentlemen, these deaths are the real thing. We are further told that the pilots "had a zany humor all their own" and that the book "swaggers with descriptions of bravado and derring-do."

After the flood of testosterone had receded and the Sousa marches had died down, I read the book and discovered that it actually provides an excellent angle on what Lewis Lapham recently quoted CIA operatives as calling "that damned thing in Laos."

Though much of his information comes from the pilots themselves, Robbins only occasionally succumbs to the temptation to aggrandize them as much as they aggrandize themselves. For the most part, the Ravens come across as what they were: good, albeit somewhat sociopathic soldiers, deceived by their government into fighting a futile war, at a great cost to the soldiers' lives. Far from being a "thriller-war adventure", The Ravens is a tragedy; the pilots are not heroes, but casualties.

For those not accustomed to it, entering the American military mentality is not easy. Of course, there is the obligatory queer-bashing already quoted. And then there is the gratuitous vulgarity of soldierly speech. The word "fuck" is never far in Robbins' book. "Putting in a strike" (a pilot said) "meant that you were busier than a one-legged man in an ass-kicking contest." And one pilot calls the American military bureaucracy "Vietnam bullshit."

Then there is the drinking and the whoring. Robbins describes "nubie night", a rite of initiation for pilots new to the "other theatre" in Laos: "This was an extended period of debauchery which included heavy drinking at the Purple Porpoise, an Air America hangout run by a genial Australian alcoholic named Monty Banks; more drinking at the White Rose, a favorite girlie bar; and a final round of drinking at the Les Rendezvous des Amis, an establishment specializing in warm beer and oral sex." When the maimed Raven Mr. Platt is scheduled to ship out, he throws a party featuring "twenty-five prepaid hookers and another twenty-five freelance."

With such comforts and license, it's no wonder that many of the pilots, though disfigured and suffering from post-traumatic stress disorder, retained fond memories of their tours. It's also no wonder that countries affected by the Vietnam War now have so many bars and hookers.

In the Republic, Plato notoriously asserted that rulers "may, if anybody, fitly lie on account of enemies or citizens for the benefit of the state" (Republic, 3.389b). Plato denied this privilege of dishonesty to laymen, and the laymen have suffered ever since. But in the secret war, both rulers and laymen, from the commander-in-chief down to the common soldier, lied like proverbial Cretins, with little benefit to the state. A few instances:

* The U.S. military was involved in Laos as early as 1961, but the extent of the involvement has never been fully disclosed.

* On January 12, 1968, the North Vietnamese Army attacked the Laotian mountain Phou Pha Thi, headquarters of the Hmong, with three Russian biplanes. Using various means, an Air America helicopter forced them all to crash. Unable to contain its pleasure in having violated the 1962 Geneva Accords guaranteeing the neutrality of Laos, the military released this event to the press. But the location given was Luang Prabang, not Phou Pha Thi. Former CIA director William Colby in his 1978 memoirs repeated this lie.

* Robbins quotes Head Raven Tom Richards as saying, "I ran the air war in Southern Laos. I could do almost anything I wanted to. The CIA took care of us. Anything you asked for, they would provide. Ordnance came out of the embassy, shipped in by Air America. After Vietnam the freedom was unbelievable."

* In 1970, when the war was losing its secrecy, Richard Nixon announced to the American public that "no American stationed in Laos has ever been killed in ground combat operations." Henry Kissinger had painstakingly authored this proposition, but much to his and Nixon's chagrin, some two hundred Americans had already been killed.

* U.S. air strikes on Laos in 1964 were leaked to the U.S. media by none other than the New China News Agency.

* "In his memoirs," writes Robbins, "Kissinger writes that the request [for B-52 strikes on the Plain of Jars] was generated by [American] Ambassador [to Laos] Godley on January 23 [1970].... In fact, Godley was instructed by Washington to ask for B-52 strikes."

* Kissinger then told Nixon that Laos' Prime Minister Souvanna Phouma "had made a formal request for B-52 strikes."

* "The President had authorized the raid if and when the enemy advanced beyond Muong Soui. 'The communists were beyond Muong Soui within 24 hours,' Kissinger records in his memoirs. 'An attack with three B-52s was launched on the evening of February 17-18.' But the enemy had not taken Muong Soui by this date, as documents declassified since the publication of Kissinger's memoirs show."

Soldiers commonly lied for much the same reason that statesmen did: they wanted the war to succeed. Soldiers argued that "Vietnam bullshit" would fail, while statesmen assumed (and continue to assume) that full disclosure would too. Both arguments were basically right. But we will never know if the Congress and the people wanted the war to succeed because they did not know its extent then, and do not know it even now. Had they been consulted, innumerable lives would have been saved with the same result: communist takeover of Indochina. About lying, Plato was wrong.

The Military Logic of Late Capitalism

The man first given to calling nations by the name of "dominoes" - Laos was the first -- was Dwight D. Eisenhower. He also warned in his farewell address of the "grave implications" of the "unwarranted influence...by the military-industrial complex." One such grave implication turned out to be the Vietnam War.

In order for a capitalist economy to avoid systemic crashes and crises, it must sustain economic growth. To do this, it must essentially become a permanent wartime economy, devoted to the production of very profitable weaponry. Once produced, this weaponry can be sold to foreign countries, stockpiled for future use, disposed of, or used in war.

Though arms sales to foreign countries are quite common (with the U.S. being the world leader), they are controversial because in the long term they obviously threaten national security. Stockpiling, meanwhile, obviates the need for new weaponry - so that's out. Disposal is clearly counterproductive. Thus the most "defensible" fate of weapons is their natural one: use against so-called enemies.

It does not really matter if the enemies are genuinely hostile, nor does it matter if the weapons promote a clear military objective. Atrocity stories are easy enough for the government to generate, as are exaggerations of the weapons' success. Then comes the inevitable exposure by the media, followed by a brief outcry, soon forgotten if the public's standard of living is sufficiently high. But in the meantime, the bombs have been spent. New enemies are created, and more bombs built. The economy chugs along. As George Orwell once observed, "War against a foreign country only happens when the moneyed classes think they are going to profit from it.... Every war when it comes, or before it comes, is represented not as a war, but as an act of self-defense against a homicidal maniac": Adolf Hitler, Ho Chi Minh, Saddam Hussein, Slobodan Milosevic.

The use of B-52s in the Vietnam War had one primary military objective, but one that had little to do with Vietnam per se. The objective was to show the Communist bloc that the U.S. does not kid around, and that it is capable at times of psychopathic behavior. This was Nixon's "Madman Theory", rooted in Truman's muscle-flexing and maniacal atomic bombing of Japan. And the theory "worked": the world began to fear the United States and still does. By and large, the Ravens were opposed to the use of B-52s, because they actually wanted the Hmong to triumph over the NVA. They were not so much concerned with saving American face or ridding the world of communism. If they could have fought the war in Laos on their own terms, they might have won.

But it is just as well that they did not. Robbins and his blurb-writer emphasize that the Ravens were "volunteers", but they were still under the employ of the U.S. military and thus constitutionally subject to Congressional control. Had they been able to buy their own planes and bombs, fine. But American citizens bought the planes and bombs, at a cost of about $2 million per day at the height of the campaign.

According to Robbins, the United States dropped six-tenths of a ton of ordnance "for every man, woman, and child" in Laos. The devastation to the countryside is recounted in Raven John Wisniewski's first visit to Laos' Plain of Jars in 1971. "Everything was bombed out. Everything was worked over with bombs. I couldn't believe it! Any place you would go on the PDJ [Plain des Jarres] would be pockmarked with bomb craters." Of the 200 or so Ravens, 30 are dead. The survivors are largely embittered alcoholics. According to the Ravens, the anti-war movement (not the CIA) sold the Hmong out, and then mistreated returning American vets. "It is chic among the Ravens," writes Robbins, "to arrive [at their annual booze-steeped reunion] in a T-shirt expressing some sentiment designed to outrage or depress the civilian population. One wears a T-shirt with the picture of a T-28 in a dive with its guns blazing, and the logo 'Fly the Friendly Skies of Laos'; others say things like 'Shot at and Missed -- Shit at and Hit' or 'Fuck You, the Horse You Rode In on, and the Colonel Who Sent You.'"

The Hmong meanwhile eke out a bare existence in exile in Thailand and the U.S., while some 60 to 80 Laotians are killed or maimed every year by unexploded ordnance. The war continues.

The Ravens is packaged as a pro-war book. Praise by Tom Clancy notwithstanding, it is not. Any book that relates war with some degree of objectivity is an anti-war book. This is simply the nature of the beast. As Howard Zinn has said, "however 'just' or 'humanitarian' may be the claims, at the irreducible core of all war is the slaughter of the innocent, organized by national leaders, accompanied by lies" - and lots of booze and hookers as compensation.

A Review of The Ravens: Pilots of the Secret War of Laos by Christopher Robbins. [Asia Books, Bangkok, 2000]