Shiite books go from banned to bestsellers in Iraq 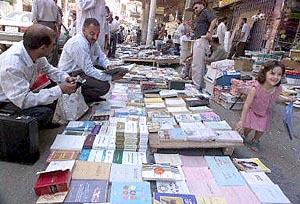 Second-hand and photocopied books for sale on the pavement of Baghdad's famous Mutanabbi street, a popular meeting place for booklovers on the Muslim weekend. 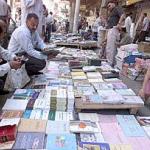 Six months ago the sale of Muslim Shiite religious books could land you in jail under Saddam Hussein's mainly Sunni regime. But now, such works have become bestsellers in Baghdad's main book market. Shiite literature fills the shelves of bookstores and blankets the sidewalks of Al-Mutanabbi Street in central Baghdad where posters of Shiite clerics such as the ayatollahs Khomeini, Sadr or Khoi are omnipresent. Prohibited under the minority Sunni regime run by Saddam for nearly a quarter-century, Shiite tomes have made a stunning comeback since US-led forces chased him from power in April.

"People prefer the writings of religious leaders that are now bestsellers," said street vendor Abed Chindi, 40, holding up a collection of 40 speeches by Ayatollah Ruhollah Khomeini, father of Iran's Islamic revolution. Hawking such literature was a dicier affair before Saddam's downfall, Chindi told a visitor to Al-Mutanabbi Street, named after a legendary Arab poet of the 10th century.

"We could have been arrested. One of my colleagues who was selling was detained for six months a year ago and his brother was executed for belonging to the (fundamentalist Shiite) Al-Daawa Party," he said.

Saddam's overthrow has opened the way for Shiite religious literature to emerge in the open not only on Al-Mutanabbi Street but throughout this country where Shiites account for 60 percent of the 25 million people. Mahdi Mohammad Abu Saleh, a 62-year-old retired policeman, recalled the days when he would come to Al-Mutanabbi seeking books sold under the counter.

"I used to come a lot because it was the only place where you could find Shiite books," said Abu Saleh, clad in a jellaba and white skullcap as he leafed through some volumes while fiddling a string of worry beads. "I was coming every Friday," he said, referring to the day when Al-Mutanabbi Street hosts an auction of rare historical, religious and poetry books.

"If they trusted you, the sellers supplied you with Shiite books," said Abu Saleh, who was kicked out of the police force under Saddam for making a pilgrimage to the tomb of Hussein, a historical Shiite figure.

"After the Koran, the books in most demand are 'Keys to Paradise' and 'Light of the Believers,'" Najah Hayawi, 58, manager of the Al-Nahda bookstore, said in a reference to two old Shiite religious texts. "The kinds of works that currently sell best are those that deal with religion, learning English and foreign languages," said Hayawi, who took over the store his father established in 1957.

Now the Al-Nahda shop is one of the oldest and best known on the street. "At the beginning we were getting essentially books from Lebanon and now a few from Iran because they are cheaper," he said.

The rising Shiite fever, that has chased texts from Saddam's Baathist regime from the shelves, has begun to worry Iraqi Sunnis, according to one Sunni who sells schoolbooks. "These books come from Iran because the Iranians want to get their message across through these writings," said the merchant, who asked not to be named. "They look at each of these religious leaders like a god. They even have a book titled 'Keys to Paradise' that they consider like the Koran," he fumed.

If Baathist propaganda has disappeared from the market, recent books on the overthrown regime are still drawing interest from readers, said one young salesman on the street. He stood by a display of books featuring Saddam or his aides on the cover, including an autobiography by a double of his slain son Uday titled "I was the son of the president."

In a small courtyard nearby, bearded fundamentalist Sunnis cooly hawk their own literary wares, including CDs of sermons by radical imams and films of Islamists in Chechnya, with Osama bin Laden and Commander Khattab on the cover. Asked if they have anything on Iraqi guerrillas resisting the US occupation, a young salesman says, "Very soon, I hope."

But at least one author is struggling to keep up with the new competition. Among the displays is a novel written by Saddam himself, entitled "Men and the City." There were no takers.