Sunrises, Serenity, and Lions on the Beach 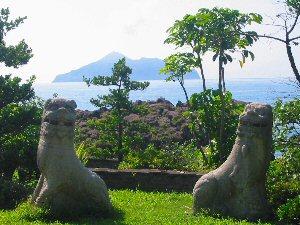 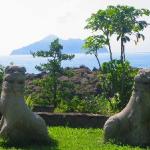 Few sights could confirm the adage that the Creator is a master painter as surely as that of the sun rising over Gueishan (Turtle Mountain) island off the coast of Ilan County. To stand on the rocky shore and watch the first rays of sunlight creep over the horizon is to view one of the Great Artist's masterpieces. If you're truly fortunate, you'll watch it while sipping tea from your balcony suite at the Leo Club, an exclusive hotel on the outskirts of Toucheng.

But as the name implies, Leo Club is more than just a place to soak in the serenity of one of Taiwan's most pristine seacoasts. It's also a monument to hotel owner/designer John Kao's greatest passion (one that, by his own admission, borders on obsession): the collection of lions. Unique and precious stone lions, to be exact. But more on that later.

Leo Club is, in many ways, an anomaly in the world of Taiwanese leisure spots (a business where the predominant model is to take a spot blessed by overwhelming natural beauty, add poorly built, garish structures without regard for either aesthetics or blending with the immediate surroundings, and then throw in an obtrusively loud karaoke parlor for good measure). In fact, those looking for the typical Taiwanese resort are likely to drive right by the Leo Club without even noticing it. Such is its understated simplicity that, from the outside, Leo Club might be mistaken for a temple or a museum. John Kao might say it's a bit of both Ð a hotel with its own private museum collection, permeated by a sense of Zen-inspired serenity.

"When I first bought this land with the intention of building a resort, I realized that I had in my possession something both special, yet fragile," says Kao, whose boyish face and passion for wearing Hawaiian-style shirts belie his status as one of the most respected businessmen on Taiwan's East Coast. "All up and down Taiwan's beautiful East Coast, which possesses some of the most spectacular scenery in Asia, if not the world, there are these ugly structures that stick out like sore thumbs. I wouldn't want to stay in one of those, and I certainly wouldn't want to build something that looked like it. I decided instead to build a place that was as close to being in harmony with the natural beauty of the land as possible."

To that end, one of the first things Kao did upon surveying his newly purchased land was to designate a large chunk of it as off-limits to building. "We have a series of tidal pools just north of the hotel that are absolutely abundant in small marine life. I decided to leave them as they are, and except for a small path leading to the pools, that end of the property is pretty much the way I found it. Guests are welcome to spend time there, but we ask that they try to minimize the impact of their visits."

An avid gardener, Kao has taken an environmentally friendly approach to the design and landscaping of the area surrounding his hotel. In place of a lush, water-guzzling lawn, the half-kilometer-long finger of land that serves as the hotel's backyard (stretching from the rocky tide pools on the north to the locally operated outdoor seafood restaurant on the south), is landscaped with flora found naturally in the high salinity environment of the beach.

High winds are also an issue. "We got hit pretty hard in the last typhoon (in August), but most of the damage was cosmetic," says Kao. "One of the reasons is that we've tried to use more environmentally sensible gardening techniques. I hope that by adhering to natural gardening methods that complement the area, we'll be able to weather nature's inevitable tantrums even better in the coming years."

Like its exterior, the Leo Club's interior is remarkably subtle, almost understated. The rooms Ð most of them with an ocean view Ð are clean and comfortable, with all the conveniences you'd expect to find in a luxury hotel. Yet the rooms feel more like a New England B&B than a Taiwanese hotel. This, too, is intentional. "We really strive to make people feel like they're guests in a home, not just anonymous faces in a hotel," says Kao, who is responsible for the interior design. In a sense, visitors are indeed guests in a private home, as one wing of the hotel serves as Kao's private residence.

Since its opening in 2000, the Leo Club Hotel has become a magnet for naturalists from around Asia. On the weekend I visited, a team of marine biologists from Japan and Taiwan had taken up temporary residence, allowing them an excellent base from which to do research. "If you go to one of the seafood markets up the coast, you'll see fisherman selling an astounding diversity of locally caught seafood," Wang Hsiao-ma, a graduate student from National Taiwan University, told me. "There are species living in these waters simply not found together anywhere else, and this makes the area a national scientific treasure."

Important though they are, marine biologists are not the most notable patrons seen at the Leo Club. On a bluff overlooking the beach just south of the hotel sits a small wooden pavilion. This unpretentious structure is a favorite spot of Vice President Annette Lu.

"She visits here from time to time," says Kao. "She calls that her 'brain-emptying shrine.' Sits there for hours sometimes...an interesting woman, Madame Vice President."

Annette Lu isn't the only Taiwan official to have found sanctuary at the Leo Club. She isn't even the highest-ranking. "A-bian has spent time here as well," Kao says, using the nickname by which President Chen Shui-bian refers to himself. "When he comes, I give him my living quarters and stay in a guest room. His entourage is pretty big, as you might imagine. I offered some of his security men a guest suite, but they slept in the kitchen so as to be closer to the president."

A combination of location, landscaping, the owner's excellent design sense, and probably just a bit of old fashioned guanxi (Kao and the president have known one another for years) have made the Leo Club a happening spot for the movers and shakers on Taiwan's A list. But cool ocean breezes and picture-perfect sunrises are only half the story. To discover the rest, one needs to know that John Kao, a man who is by most accounts a rational businessman with impeccable business sense, has a fixation. Some might call it a full-blown mania.

Kao, you see, is the world's largest private collector of stone lions. What began as a simple hobby has blossomed into a top-priority undertaking. Kao began displaying his collection seven years ago, eventually expanding his museum into a resort. He freely admits to having little self control when it comes to adding to his collection.

"I've been fascinated with lions all my life, specifically in the way they've been depicted by sculptors throughout history," he says. "I love stone lions. If I hear of an unusual or unique piece, obtaining it generally takes precedence over anything else. I've spent over US$3 million on my collection."

The collection, which has taken most of a lifetime to amass, now numbers over 6,000 pieces, ranging from stone guardian sculptures that can weigh over a ton, to jade pieces that can be held in one's hand. In one room sits a Song dynasty chi ling, a lion-like creature with one horn, cloven hooves, and dragon scales. Beside it is a carved sandalwood lion presented to the museum by a Buddhist master from Sri Lanka. "My collection is generally restricted to lions of Chinese origin," notes Kao. "You know, the lion plays an important part in Chinese cultural and religious beliefs. It is the messenger of the gods. But this piece from Sri Lanka...well, it is so unique, and as the man who gave it to me is a respected monk, I was happy to make an exception."

To Kao's knowledge, his oldest piece is a stone statue that was found by peasants digging a well in Shanxi Province. It's been appraised as being over 3,000 years old. While the features have been so worn by time as to make them difficult to distinguish, the depiction is clearly that of a mythical lion. A prankster has placed a placard under the sculpture that says "Hello everybody, I am an adorable baby alien." Kao liked the joke so much he decided to keep the card in place.

There are certainly nationalistic overtones to Kao's collection. "Many of China's most fabulous pieces were carted away to Europe during the late Qing dynasty and the ensuing decades of chaos. Getting as many of these back as possible has been a priority." One point often made among art lovers in Taiwan is that the Kuomintang's removal of some of China's most valuable works of art before fleeing the mainland was a blessing, as it prevented their later destruction during the Cultural Revolution.

Unfortunately, according to Kao, this good fortune did not extend to China's lion statues. "Too heavy to cart away," he says. "During the Cultural Revolution, many excellent pieces were destroyed. I was an active collector at the time, and did what I could to rescue a few of these."

Space considerations allow less than a third of the pieces to be displayed at one time. Some of the larger lions stand guard outside, but even with this added space the majority of the collection is in storage. Among the projects planned by Kao are an enclosed arboretum, built around a 400-year-old banyan tree on the property, and an expansion of his museum to allow more of the collection to go on public display. "I have big plans for the future," boasts Kao. "When the new [Shueishan] tunnel is completed in 2004, travel time from Taipei to Ilan will be cut drastically, and I believe this will make it feasible for me to expand the size of both the resort and the museum."

But even if lions aren't your cup of oolong, there are other reasons to make a weekend at the Leo Club a sensible getaway. Directly across from Toucheng is Gueishan island, a lush volcanic formation that offers visitors a chance to visit a geological oddity Ð an underwater hot-spring vent. Ninety-minute cruises leave from the nearby harbor four times daily and circle the island (which does, in fact, resemble a turtle), taking you above the scalding waters that emerge from underwater vents to tint the blue Pacific waters a very strange shade of green.

Another major attraction of the area is dolphin watching, and most of the tour boats making trips around Gueishan will venture further out in search of schools of the playful Flipper wannabes looking to show off for the tourists. Gueishan itself, long under military control, has recently been opened to tourists. In an effort to keep the island pristine, travel within the island is still restricted, and permits are required. (The hotel can help arrange these with advance notice.)

Other activities are available, and some visitors will spend their time swimming in the ocean or soaking in the hot springs of nearby Toucheng. Those more inclined to the extreme might spend a day paragliding off the nearby cliffs (the hotel staff can also help arrange this for you). Still others might spend their weekend sitting on the beach, or in their own "brain-emptying shrines," just staring out at the waves. The choice is yours.

While not yet famous on the international spa circuit, the Leo Club (Toucheng, Ilan County, Tel: 03-9780782) is regarded among Taiwan's in-the-know crowd as one of the best getaway spots on the island, and advanced resorvations are advised.