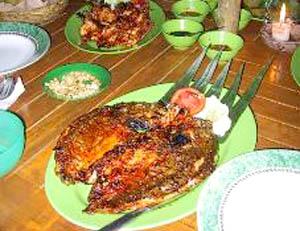 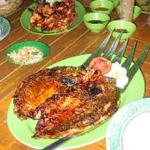 The car wended its way along quiet streets lined with private residences, the golden street lights casting a warm glow over the few pedestrians on the sidewalk, snatches of their conversation wafting by as we whizzed past. As we headed further towards the coast along Uluwatu Road, the houses give way to the smartly landscaped frontages of the Intercontinental and the Four Seasons hotels. In the darkness beyond, the subtle lighting wash the grounds with a gentle sheen while the silhouettes of the resorts further away from the road hint of pampered living.in style within their walls.

But it is not to one of their elegant restaurants that we are headed. Our host is Harry, a Singaporean who has lived in Bali for years and who owns the first cyber café on the island. With two Singaporean friends visiting, he has decided to introduce them to the seafood on Jimbaran bay.

A once sleepy cove which has been changed by the arrival of the Four Seasons Resort and the Inter Continental hotel, Jimbaran bay on the southern tip of the island is blessed with long, white-sand beaches, peaceful waters and some of the most gorgeous sunsets in Bali. Its seafood restaurants have long been a favourite of locals and tourists alike.

We pull into a car park that is saved from total darkness by the weak fluorescent lights which pierce the dusky night air. The lights emanate from a row of huts that stand between the car park and the beach. As our eyes get accustomed to the semi-darkness we can make out the shapes of many young men tending to large grills beside the huts. Over large barbecue pits fired with dried coconut husks, fish, lobsters, prawns and other manner of seafood are being slowly cooked, perfuming the night air with delicious blends of oriental spices.

As we walk towards the restaurants, staff from various establishments call out to us to patronize theirs. We head for Harry's favorite, and the staff are soon busy telling him about the catch of the day. Live fish are swimming in large aquariums, mountains of prawns, squid and shellfish are piled high on mounds of ice chips to keep them fresh in the tropical heat. We take our pick of the seafood, discuss with the staff how we wanted the seafood prepared, and then head for one of the many tables spread out on the beach. The white canvas umbrellas over each table may have afforded welcome shade in the afternoon sun, but now, at dusk, they only obscure the night sky. There are no stars about this evening, anyway. The heavy umbrellas flap lazily in the brisk sea breeze, while the candle on the table shines serenely behind the protection of its glass shade.

We settle down into the chairs, and soon have our sandals off and toes buried in the sand beneath our feet. Nursing an ice-cold Bir Bintang each, we sit back to soak in our surroundings. The delicious smells of the grilling seafood perfumed with fragrant mixes of spices make our mouth water. To make the waiting easier, our host points out to us a vendor selling grilled corn-on-the- cob and steamed groundnuts from a cart on the beach.

We stroll over and watch the vendor grilling the corn over a charcoal fire, fanning the fire with a fan woven from dried leaves, by the light of a kerosene lamp. When the corn is done, he brushes it with margarine, and then slathers on a spice paste. This is the ubiquitous "bumbu", an Indonesian word which refers to a blend of spices used for cooking. Indonesia is home to the Spice Islands, and a wide variety of spices.

Although spice mixes for preparing many well-known Indonesian dishes are now available in neat little packets from supermarkets, purists still eschew such convenience for the incomparable taste sensations of dried or fresh spices pounded by hand with a pestle and mortar, which releases the aroma in a way no machine-ground mix can hold a candle to. No less important is the skill of the chef in combining the spices in proportions which will best bring out the flavor of the food to be cooked. Chillies, onions, garlic, candle nuts, ginger, cloves, cinnamon, anise, cardamon, turmeric, lemon grass - mixed by a master (or should one say "Mistress", since it is usually the women-folk who do the cooking in Indonesia) chef like a symphony of tastes and flavors. In many parts of Indonesia, the assessment of a potential bride is still linked to her skills in preparing bumbu.

After ascertaining that I am used to spicy food, the vendor smears on a generous dollop of the bumbu. The corn was wonderful. Each bite was a melody of taste sensations: the firm pearls of corn had a lovely smoky taste from the charcoal fire. Dry on the outside, the corn was moist on the inside as it had been steamed prior to being grilled. The combined taste of the sweet corn, margarine and spicy bumbu made every mouthful a pleasure. In no time, the corn was polished off, and we settled back to await the arrival of our dinner.

On the table were five little plastic saucers containing different condiments: fresh minced garlic, sliced red chilli in light soya sauce, two types of chilli paste and dark soya sauce. They are there for those who wish to further tweak the taste of their food.

Before long, the first dish arrives. A large snapper sliced open, smothered with a robust chilli paste and grilled in banana leaves to smoky perfection. Parts of the fish were grilled to a brown, caramelized crisp. The fish itself was smooth and soft to the taste, the delicate texture enhanced by the spice blend of chilli, coriander, shallots, garlic, turmeric, ginger, kaffir lime leaves, lemon grass, and topped off with a dash of lime juice. Sheer ambrosia.

We were tucking into the fish even as the other dishes arrived. Large prawns grilled in their shells in a spicy-sweet bumbu. A plate of shellfish steamed with a milder bumbu. A plate of morning glory leaves stir-fried in, you guessed it, a bumbu paste. The taste sensations evoked by the expert combinations of spices made each dish mouth-wateringly different. In contrast, another dish of steamed fish tasted bland and we found ourselves spicing it up with the condiments at the table.

Hearty helpings of plain steamed rice help soothe our raging taste buds, as did the beer and ice-cold coconut water. The brisk sea breeze helped cool our brows which were covered with perspiration from the spicy food.

After we have had our fill, we sat back to enjoy the view. Flanked by the Four Seasons and the Ritz Carlton resort hotels, the beach restaurants enjoyed a thriving business. Almost all tables were occupied. Large groups of tourists sat in long rows of tables, chilled bottles of wine or champagne waiting in ice buckets on stands jammed into the sand. Aussies, Germans, Brits - their accents proclaimed the origins of the various groups. There were quite a number of Indonesian tourists there as well, many taking a break with their children during the school holidays. Their presence attest to the quality of the food, according to the adage: Never go to a restaurant which locals shun. To our right, the bright runway lights of Ngurah Rai International Airport could be seen clearly, with a constant stream of jumbos taking off and landing.

A group of 4 musicians, all dressed in black, stroll among the diners, singing plaintive ballads of love in different languages. Harry told us that the musicians were from Solo in Java, but listening to them belting out "Besame mucho" and "Guantanamera" with such feeling, it would be easy to believe otherwise. Soon they are beside our table and asking us if we had any song requests. We ask them to sing whatever they feel like. And they launch into a dramatic rendition of a Teresa Teng love song in Fujian dialect. It was so unexpected that we grinned in appreciation. Obviously the seafood restaurants have seen a good number of Taiwanese tourists as well.

As we left the restaurant, our senses content with all that we had seen, smelled, tasted and heard during the evening, the sounds of the musicians, the surf and the drone of the dinner crowd trailed us back into the darkness of the car park.

A Palace on Stilts

A little taste of sunshine