The Tasty Foods of Iran - Enshrined in the Aura of History 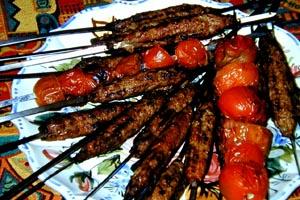 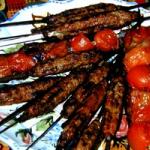 When we cook with apricots, artichokes, eggplants, lemons, lime, oranges, pistachios, spinach, saffron or tarragon, Iran should immediately come to mind. These cooking ingredients and many others came to us from that country, historically known as Persia. Its location at the very center of the Silk Road, gave it A strategic position at a point of confluence between East and West and between the ancient and medieval worlds. This made it an ideal transition point for products being traded between the Orient and the West for thousands of years.

Many of these products were introduced into Iran from China and India in ancient times, then carried to the Iberian Peninsula by the Arabs after the rise of Islam. In the ensuing centuries, from this once Arab stronghold in Europe, they were defused to the remainder of the continent. The names of these food products and ingredients, in most European languages, in many cases, still carry their Arabized-Persian names. As a few examples, in English, apricots, get their name from the Arabic/Persian (al-barquq); artichokes (al-khurshuf); lemons and limes (laymun); oranges (naranj); and spinach (isbanakh).

The Iranian use of seasoning in their food has a history that goes back to the beginning of civilization. Continuing the tradition of the use of condiments in the kitchen from the Sumerians and Babylonians in Mesopotamia, the cuisine of Iran developed into haute culture of the kings. Tablets from the time of these ancient peoples indicate that the inhabitants of Mesopotamia were using basil, cilantro, cumin and caraway in their food some 4,000 years before the birth of Christ.

In the ensuing centuries, the culinary art of Iran was refined by the use of these and a good number of other local herbs and spices, as well as the introduction of plants and products from the neighbouring lands. Through the centuries, they were able to develop a mouth-watering cuisine by using just the right amount of seasoning by the combination of spices and herbs.

Onions and garlic are used but only in small amounts, it is said, in order not to offend others. The other condiments such as cinnamon, cardamom, cloves, coriander, dill, nutmeg, paprika, pomegranates, saffron, sumac, turmeric, as well as orange-flower water and rose water, are employed with discretion, not to overpower but only to enhance the main ingredients.

A whole world of sweet and sour sauces, stuffed vegetables and greens like grape leaves, and countless types of pastries were developed. Meat and fruit are often cooked together and, at the same time, enhanced by the minimal use of herbs and spices to form exotic dishes. By the subtle use of fresh and dried fruits, a balance between sweetness and tartness is always kept. It is no wonder than that, for hundred of years, Iran has boasted one of the most sophisticated kitchens in western Asia.

Much of the foods of the Middle East such as wheat bread, eggplant, chick peas, dried fava beans, lamb, lentils, rice and yogurt are also the staples of Iran. However, Iran carries its art of cooking one step further. They consume rice much more than the other people in that part of the world. Rice is served at almost every meal. At the pinnacle of the rice dishes is Chelo Koresh (crusty baked rice topped by a sauce) which is served in most households at least once daily.

Second place to rice in the Iranian kitchen[,] is the use of wheat and its products. Both cooked cracked wheat (burghul) and rice are served boiled, steamed or in pilaf.

To Iranians, young tender lamb and, to a lesser extent, goat are the most favoured meats. In the main, they are combined with rice in dishes such as Tah Chin (layered rice, yogurt and lamb) or the many Dolmeh (stuffed vegetable) dishes. Only rarely are beef, chicken and fish on the menu.

Some well-known Iranian dishes are: Abgousht (a meat and vegetable stew); Fesenjan (Chicken in pomegranate and walnut sauce); and Shirin Polo (chicken breast with, rice and sliced almonds. However, the crown jewel of the Iranian national cuisine, Chelo Kabab (marinated charcoal-grilled lamb served over rice) is considered to be the top dish of the country. Grilled tomatoes, Nan (a pita-like bread), and Panir (a feta-like white cheese) are usually served with Chelo Kabab.

Yet, even though in the Western world[,] Iranians are usually associated with kababs, Iranian cuisine also includes a wide variety of cheese, egg, dairy, grain, legume, vegetables, yogurt and fruit dishes. Whole, ground or chopped nuts, especially pistachios, walnuts and almonds, are also extensively used as ingredients or decorate a good number of foods. Sabzi Khordan (bread and cheese-cucumber-walnut type pizza); Kuku (egg and vegetable cakes); Aash (a series of soups); and Maast-o-Khiar (Cucumber in Yogurt) ; and, especially eggplant (called the potato of Iran), are peoples foods par excellence.

Iranian cuisine is well noted for its some forty types of bread - in all shapes and forms. One type of flat bread is always served with every meal. The usual desserts for Iranians are fresh fruits. However, their kitchen includes innumerable pastries like Baklava, as well as Shirinis (puddings), candied and dried fruits, nuts, raisins and honey, all served with a sweet drink called Sharbat.

For drinks, tea rather than coffee is the national beverage. Sweet hot tea (herbal and regular) served in tiny cups is the usual refreshment. Tea is enjoyed at the beginning of the day, at breaks during work and to accompany social or business engagements. On the other hand, almost as important in the daily life of the Iranians is Dugh (yogurt, diluted with water and lightly salted). Refreshing and delightful, it is served as a drink, usually accompanying meals.

From Iran's historic kitchen, I have taken a few traditional dishes, simplified and adapted them to my taste. However, I have tried to keep their essence and culinary attributes intact.