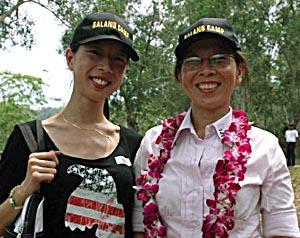 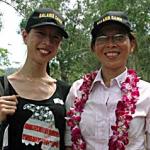 PULAU GALANG, Indonesia, April 3, 2005 - Tien Tran knelt at the grave of her husband, tears streaming down her face, as Buddhist monks and a Catholic priest recited prayers in succession.

After 17 years, Tran had the chance to visit her husband's grave for the first time last week and was reunited with around 100 other ex-Vietnamese boat people in their former refugee camp on the Indonesian island of Galang. Galang is among several places in Asia that bore the brunt of an exodus of Vietnamese asylum-seekers after the end of the Vietnam War in April 1975 and, later, "economic" refugees who followed in the 1980s and 90s.

"I was very sad I had to leave him," Tran said of her husband, who died of illness six months before she moved to Australia in 1987. "I only wish one day I can bring his ashes to Australia to keep him in one of the temples in Brisbane so that my children can pray for him," 52-year old Tran said as she struggled to hold back tears.

Another woman put flowers, money and coins on the grave while a man burned fake 1,000 US dollar bills around it. "The money is for him to spend. According to our belief, even though someone has died he still has needs," the man said.

After living in the camp for more than three years Tran left Galang with her four children to resettle in Australia, where she makes a living as a dressmaker. "I told him what happened to me and the children. I prayed that his soul would go to another person in the next life so that he will think about me and my four chilren and ... support us in difficult situations," she said.

The cemetery at the refugee camp in Galang is a reminder of the struggle of Vietnamese refugees who fled their country after the fall of Saigon, making often dangerous journeys to seek a better life elsewhere. Many of them died of starvation or accidents during their long and perilous sea trips on dilapidated and overcrowded boats. Those that made it ended up in refugee camps such as Galang before lucky ones were resettled in third countries around the world, mostly the United States, Canada and Australia. Of 147,000 refugees in the camp, 132,000 were accepted by third countries. Tran's husband, like many others, never made it.

Few tombs at the cemetary bear names of the deceased, but many are of small children. A memorial plaque in front of the graveyard says: "Dedicated to the People Who Died in the Sea on the Way to Freedom."

Little has changed at the camp, according to the visiting former boat people. The Catholic church, the Buddhist temple and the Youth Center in the sprawling camp were restored and freshly painted for the reunion. But the scattered wooden barracks once housing the refugees remain in a state of disrepair.

For Quoc-Viet Tran, now head of the Vietnamese language program with Australia's SBS radio, Thursday's memorial trip was like coming home to a "second birth place". "It's a joyful feeling but also sad because the nature of the place and the buildings just remind me of those days 20 years ago and of people who have gone already," he said. "Many of us who survived believe we were reborn after such a trip. That's why this place is a second birth place because it gave birth to our second life, life with freedom and dignity," he said.

Like many other boat people, Quoc-Viet Tran, now 55, served in the South Vietnamese army fighting the Communists during the Vietnam war and after the fall of Saigon he was a victim of persecution by the Communist regime. Quoc-Viet Tran said even after being released from a "reeducation camp", he was not given full citizenship, preventing him from getting a proper job. "It's like a vicious cycle. Because I didn't have the citizenship, I couldn't work and because I didn't have a proper job, I couldn't apply for permanent residency," said Quoc-Viet Tran, who spent 11 months in Galang between 1984-1985.

"I could not survive because anything I tried would be deemed illegal. So I decided to gamble against nature. If I was lucky I would survive, if not I'd rather die that way than dying a slow death," he said.

Vin Hong, who spent a year at Galang in 1983 before he was resettled and became a journalist with the BBC, said the visit overwhelmed him with mixed feelings. "Everything, images, people, senses and memories came back to me all at once very fast," he said.

At 17 Hai Yen Huynh escaped Vietnam with her parents and eight siblings. Her brother died along with 27 others asylum-seekers during the 27-day trip in 1979 she described as painful. Huynh, who now runs a bakery in Australia and is married to an Australian, said she felt more at home in Galang than Vietnam. "In Australia I feel homesick. I miss Galang, I miss Vietnam but it's funny when I go back here I feel more comfortable than when I visited Vietnam. Here I feel like coming home," said Huynh, who travelled along with her 17-year old daughter Fay Lynn. Asked if the visit brought back painful memories, she said: "Actually here it was a good memory."

More than 6,000 other boat people, however, were forced to return because they were not considered victims of political or religious persecution. Tour guide Mohammad Yono said hundreds of refugees committed suicide by hanging themselves or throwing themselves into ravines after they were denied refugee status and faced forced repatriation. "This place is haunted. Many ethnic Chinese have come here to get inspiration on lottery numbers" from the spirits, he said, pointing to a ravine where refugees were said to have killed themselves.