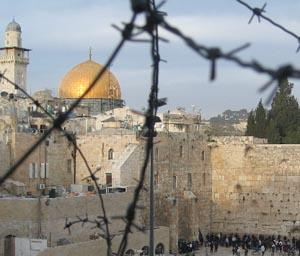 View of the Western Wall and the Dome of the Rock. 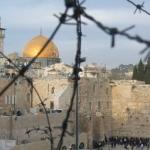 People streaming in both directions, as the sun falls behind the King David and my beer catches the last touch of dusk light. It's an extraordinary place to sit, watching the Hassids in their felt and fur hats, the bearded, black-cloaked Greek Orthodox priests, the shifty-eyed touts, the wolfish guides, the bread and corn sellers, the small groups of dark-eyed Jewish girls hurrying toward the Western Wall clutching their prayer books, the taxis and tomcats and tourists, the occasional Arab with his Palestinian headdress and worry beads, all of them moving steadily past my small wooden table, just down the cobblestones from Jaffa Gate....

Three days ago, I rode the morning express bus to Jerusalem, the day after Israeli soldiers seized alleged terrorist bank accounts in Ramallah and rioting erupted on the streets. There are at least half a dozen young army recruits on the bus, their Uzis dangling lazily from the handles near the seats.

A day late and a shekel short: that's how I felt, at least at first, wandering around the old walled city. The historic aura of Jerusalem will never vanish, but how one longs for the days before the entire area was built up, covered with souvenir shops, surrounded by taxis and suburbs and halogen lamps. My first fifteen minutes on the cobbled streets were entirely dedicated to fending off touts, who are probably pushy in the best of times but have been made desperate by the devastating downturn in tourism.

It took a sharp left into the Arab quarter to remove myself from their wheedling displays of practiced hospitality. Suddenly I found myself on my own, strolling amidst sandstone arches and tiled street signs in Hebrew, Arabic, and English, watching groups of men play chess and listening to groups of children run through narrow, graffiti-painted alleys. I overcame my fear pf photography in the butcher's lane, where men selling fish and smoking hookahs filled with fruit-flavored tobacco gravely nodded when I asked permission to take their photos.

After wandering for an hour I found myself on the fringes of the Arab Quarter, at a street called Western Wall Road. I hesitated. If I followed the road, it would take me to the Koret, the remaining foundation wall of the great Second Temple, a vast synagogue build by King Herod and destroyed by the Romans in about 70 ACE. The Western Wall is the most sacred site in Judaism, and is certainly a focus of this pilgrimage - but was I ready? I had forgotten to carry the small satchel of prayers and wishes that I'd solicited from friends. These words, rolled into tiny tubes and tied with string, are traditionally pressed into cracks between the ancient stones. It seemed almost improper to approach the Wall without them, in a spontaneous and accidental fashion.

But how could I resist? I followed the street into the Jewish Quarter, which, it was immediately clear, was far better funded and maintained than the Arab neighborhoods I'd just left.

The passage leading to the open courtyard of the Wall was blocked by a high-tech screening area, and two Uzi-wielding guards wearing Kevlar vests. The younger of the two, a blonde-haired Russian man who immigrated in 1991, searched my bags completely, screening my laptop separately, and offered some friendly words before directing me down the flight of steps leading to the sacred site.

I've seen so many pictures of the so-called "Wailing Wall" that I was surprised by how exposed and almost stark it appeared. My sense had been that the wall was almost in a kind of grove, or on a stone platform, free-standing, its edges crumbling. But the single remaining section of the Great Temple was built as part of the building's foundation: one of four retaining walls surrounding a small hill. The wall is enormous, and continues on well past the area where men - exclusively men, it seemed - were bowing and supplicating, moving on the south toward a guarded car park and on the north into a cavernous hall filled with prayers books, Torahs, and small rooms were groups of men with long braids and black yarmulkes read prayers in a rapid, muttering rhythm.

My keen desire was to experience my moment in this holy place alone, and absorb the atmosphere of my surroundings. But I was given no peace. From the moment I arrived, weary- or wild-eyed devotees were bent on getting my attention. Some wanted me to look through albums of their charitable deeds and make a contribution; some wanted me to receive a blessing from their rabbis and make a charitable contribution; and a least a dozen others, all speaking fluent English and full of zeal, tried aggressively to get me to put on tifillin, the tiny prayer boxes tied with leather straps onto the arm and forehead as a sign of one's covenant with God.

The place where I finally found respite from these demands was the Wall itself. I made straight for it, and pressed my hands and head against the time-worn stone. The crevices were stuffed with bits of folded paper, all prayers, some possibly decades old. It took a few moments, but the undeniable power of the spot began emanating through the stone and into my skull. By the time I stood upright, my face was streaked with tears. I'd had my first Wall encounter, for sure.

My second day in the Old City, Sister T., an activist nun who asked that her name not appear in print, meet me near Jaffa Gate and took me on a walking tour of the Christian and Moslem Quarters. Short, pushing 70 but fit, she moved with determination under her broad-brimmed hat, illuminating religious architecture and political conflict with the same degree of passion.

Together we visited most of the Stations of the Cross, but backwards, beginning with the Church of the Holy Sepulcher. It's a pastiche of many Christian sects, all different, but all united at the site of Golgotha Rock, where Jesus was crucified.

There were very few people around. We passed the place where Jesus fell; where Pontius Pilate identified him; where Simon helped him carry the cross. The route is fictional; no one knows exactly where Jesus walked, and the route has changed over time. But several of the sites are historically accepted, and one does get the feeling of following more or less in the footsteps of that ancient procession, long before the Via Dolorosa was fitted with lights and surveillance cameras.

We backtracked a bit and walked through the Moslem Quarter toward Damascus Gate. This is the liveliest, most colorful part of the Old City, by far, and Sister T. loves it. El-Wad was crammed with Arabs setting off for their Friday prayers at the Dome of the Rock. Both sides of the path were lined with stalls, a true Middle Eastern bazaar with shops selling halvah and gummy bears, jeans and watches, Pillsbury cake mix, prayer beads, perfumes, and computer peripherals.

Damascus Gate itself was heavily guarded by Israeli soldiers, much to Sister T.'s disgust. In the 30-plus years she has been visiting and living in Jerusalem, she has seen every manner of oppression, and feels deep sympathy for the Palestinian plight. We talked about the situation for much of our stroll, reaching no conclusions; no one ever does, except for the extremists.

I'm at the point where I find it impossible to fix blame anywhere. Every effect can be traced back to a cause, and every cause was itself an effect. The cycle seems endless, a cord running far back into the past and disappearing into the future. But walking through the Arab sections, watching as the elderly women selling fennel and sage were forced to move along, looking up at the armored security cameras, seeing the soldiers everywhere, it was difficult to see the vast majority of workaday Palestinians as anything but victims. But overarching all my impressions was a keen sense of inadequacy, and distrust of my perceptions. Everything I can write about the situation is naïve and uninformed -- and the same would be true if I had been here four months, instead of just four days.

Short of making an endless list, there is no way to capture the otherworldly sense of Old Jerusalem. Walled cities are worlds unto themselves, and outsiders can take away only the barest notion of life within their borders. I walked miles, took as many pictures as I could, and ended up feeling that I had been handed a copy of Anna Karenina, or One Flew Over the Cuckoo's Nest, or the Bible, and told that I must form my impressions and write my review based on a single, randomly chosen sentence.

Sister T. left me at Jaffa Gate, and I retraced our route back toward the falafel stands along El-Wad. I was coming out of the Moslem Quarter, rounding the corner toward Ha-Shalshelet and the entrance to the Western Wall, when I heard the explosions: a series of muffled booms, one atop the other. The Moslems that Sister T. and I had seen streaming toward the Dome of the Rock were now streaming out, purposefully, many talking on cell phones. New squads of Israeli soldiers were running toward the entrances to the mosque, their rifles ready.

As I stood near the archway leading toward the Dome, an elderly Palestinian, dressed in a dark suit, began hurling invectives in my general direction.

"Look at them," he said, tossing his chin at the soldier. "They are fuckings. Are you an American? Yes? Then you are Jewish. Your money, for this. On our holy day, in the mosque. Hamas will answer them for this. Someday..." he made a stomping, twisting motion..."we will do to Israel like this."

What had happened? I got the story in fits and starts. Tensions in Israel are extremely high right now, because of the barrier and the confiscation of Palestinian bank accounts (the Israel authorities claim they are linked to terror organizations; Sister T. says that humanitarian funds have also been "robbed"). Toward the end of the late morning prayers, a few rocks were thrown, and cries of "Alihu Akhbar," God is Great, were heard. The Israeli commander immediately ordered the area closed.

Arab worshippers leaving the mosque told me there had been no trouble. But the Dome of the Rock is a big place and, in spite of everything, I do not believe the Israelis would have simply closed the area without the slightest provocation -- as closing the area is itself a provocation.

But that was the day's bit of excitement, and it soon became the talk of the town. If nothing else, it served to underscore what Sister T. and others have told me: that the Arab citizenry is very much under the thumb of the Israeli forces. Even Israelis use the word "occupation," and from my point of view the situation here is far more tense and dramatic than anything I witnessed in occupied Tibet.

The key difference, I think, is that the Israelis, for all their arrogance and fury, are not attempting a cultural genocide. They are entangled in the endless task of defending an unwelcome state besieged on all sides by enemies, in a climate of unrelenting fear, mutual suspicion, and ever-increasing anti-Semitism.