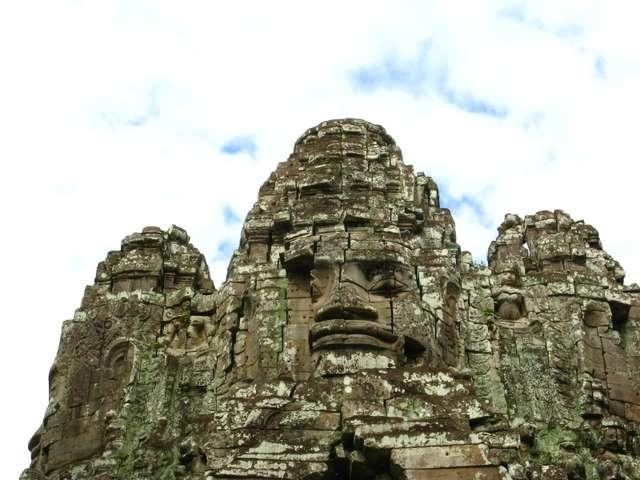 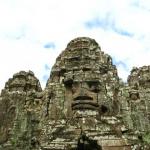 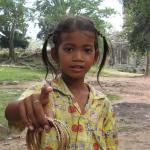 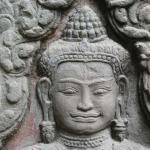 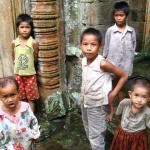 Angkor Wat is home to hundreds of thousand-year old ruins; it’s also the stomping ground of about as many uncannily erudite ten-year olds, children who both speak passable English and can recite with rapidity and accuracy various bits of trivia regarding your personal place of origin.  In the end, though, the children’s goal isn’t to impress you with their scholarship, but to get you to buy their wares.

“What city? Ah, New York!  The Yankees are having a good year.  Now you buy bracelets from me."

They’re generally successful; after all, who can say no to a precocious pre-teen offering five woven bamboo bracelets for a dollar (ten if you seem to be wavering) and their opinion that the Yankees have a good shot at this year’s pennant?  Unless you're seriously broke, five bracelets (six if you seem to be wavering) for a greenback isn't going to impact your travel budget appreciably. But what do you do when all four arms (yours and your wife's) are covered wrist to elbow, and you're both still surrounded by half a dozen of these young scholar/saleskinder, all of whom desperately want both to sell you more bracelets and inform your wife (who they’ve decided looks Irish) that her national capital is Dublin?

You smile, of course, and hold out your arms as a way of letting them know that, really, you've got more bracelets than even Shiva could comfortably wear. Not that this does you any good.

"That's OK, I also have postcards,"

One of these mercantile juveniles will pipe up, causing the others to immediately reach into their bags for picture-postcards of the very temples that you desperately wish they'd let you explore.  Some of the cards bear images of children much like themselves, engaged in typical Khmer-kid activities like fishing for river catfish or riding water-buffalos. Not surprisingly, there are never any postcards with pictures of children selling bracelets and postcards to foreign tourists.

So you buy a few bundles, until you've exchanged all of the singles in your wallet for postcards that you'll never actually send because you don't know that many people and besides, who sends postcards in this day and age anyway? Having now fulfilled your obligations as conscientious tourists in a cash-strapped country, you and your wife assume you'll be left alone to explore some ruins.

How sadly mistaken you both are.

For you see, while you were buying souvenirs from the first round of children, a second wave has been heading inexorably in your direction, as if drawn by some great neon homing beacon blinking "DOLLARS! HERE!" in Khmer. This new round is carrying everything from wooden Buddhas to T-shirts.

One cherubic girl asks your wife after informing her the population of Dublin is 1.6 million, and she is instantly smitten. Even you, hardened traveler though you are, are impressed by the combination of cute and canny being utilized by these trader tots of Angkor Wat. But daylight is burning, the ruins of Angkor await, and you’d both promised yourselves this morning that you wouldn’t allow today to be turned into a shopping expedition (like yesterday in Siem Reap).   So you change tactics and ask the nearest mini-marketer just how it is that at such a young age she's managed to obtain such a fine grasp of English syntax and global geography.

Too late you realize your mistake, for this is the very question that will lead to the relinquishing of much of the rest of your hard currency.

"Our teacher taught us everything..." One of them, or perhaps all of them in unison, exclaims. “But now we can't learn anything more because we don't have enough money to stay in school! If you don't buy more postcards, bracelets, and everything else we have, we won't be able to afford school. Please, mister...lady...we want to LEARN."

So you both give up the notion of exploring the ruins anytime soon, or of getting back to the hotel (in whose safe you've wisely stashed away some traveler’s checks) with tens and twenties intact.  Your wife buys a few pair of loose-fitting Sinbad-esque pants in varying colors, and you pick out the shirts that you think won't look too silly outside of Cambodia. You also buy a few pieces of art copied from the stone carvings found in Angkor Wat's many temples, a good thing as you no longer have time to visit the temples themselves. Simultaneously laden with and relieved of wealth, you head back towards your waiting tuk-tuk driver as one of the children shouts after you