Typhoon Signal Number 8 Has Been Raised 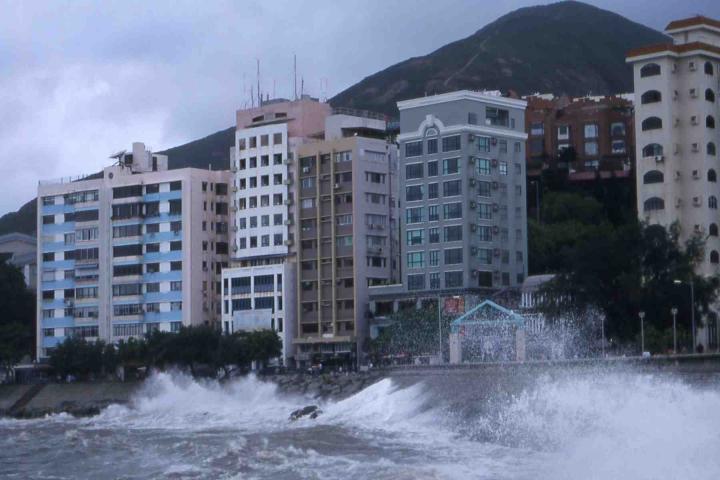 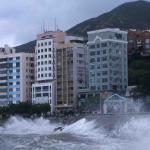 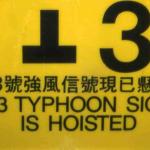 I couldn’t miss the warnings that warm July evening in Hong Kong, for they were posted everywhere.  At the automatic doors of glitzy shopping malls.  Atop the escalators pulling endless lines of commuters out of the bowels of MTR subway stations.  Beside the orderly queues for bright red taxis and in the terminals of the venerable Star Ferry.

Like many signs in Hong Kong, these signs featured both Cantonese and English.  The signs were red on white, or yellow on black.  Usually they were made of plastic, but sometimes they were simple paper announcements printed straight from an office laser printer.  They were large and small, vertical and horizontal, dirty and clean, on poles, taped to windows.  And every last sign proclaimed the same ominous message: Typhoon Warning Signal #1 has been hoisted.

As for me, I hoisted a beer in celebration.  This was my first typhoon, and as a lifelong storm junkie, I viewed the oncoming tempest as a bonus to my Hong Kong visit, a sort of trip freebie thrown in free of charge.

The word “typhoon” derives from the Cantonese tai fung, which translates as “big wind.”  Typhoons certainly qualify as big winds, with top wind gusts reaching 160 mph (260 kph).  Sometimes called tropical cyclones, typhoons strike Hong Kong between May and November, with August and September the peak months.  Like Atlantic hurricanes, South Pacific typhoons are given names.  In past years storms with improbable names like Wanda and Hope have pummeled Hong Kong.  The typhoon that had prompted warning signal #1 to be hoisted that July evening bore the uninspiring name of Imbudo, which meant “funnel” in Tagalog.

Imbudo was the first typhoon to threaten Hong Kong during the 2003 typhoon season, which promised to start off with a bang given that the storm was also the largest typhoon to approach the city in the last five years.  Imbudo had already hammered the Philippines with winds of up to 140 mph (230 kph), where it killed seven people, devastated homes and businesses, and triggered large-scale evacuations.  Now Imbudo had roared out to sea on a northwestern track that led straight to Hong Kong.

The city faced this threat with remarkable calm.  Business continued as usual, though everyone kept a wary eye on the latest weather report.  I found the televised weather updates to be less sophisticated than in the United States, a country so weather-obsessed that it has an entire cable channel devoted to weather alone.  In Hong Kong I learned not to expect high-tech doppler radar images, but on the other hand, I grew to appreciate how local newscasts offered far more sober reports than those on offer in the United States.  In the States a few inches of snow can provoke a blizzard of hysterical news coverage sprinkled with dire warnings about icy roads and wind chills, as if the nation had never weathered a snowstorm before.  In Hong Kong, however, everybody is too busy making money to panic at the first hint of inclement weather.  Besides, they know they can rely on the Hong Kong Observatory to give them adequate warning of approaching storms.

The Hong Kong Observatory hoisted Typhoon Warning Signal #3 the next day, and said that while the center of Typhoon Imbudo would probably pass to the south of the city, this glancing blow might still necessitate raising warning signal #8.  Warning signal #9 or even #10 could not be ruled out, however, in the unlikely event of the storm altering course and heading straight for Hong Kong.

Meanwhile, I couldn’t help but feel a certain boyish excitement.  I’d always loved storms, from the summer thunder and lightning of my adopted Midwestern home to the hurricanes and nor’easters of my childhood.  I’d been raised in Gloucester, Massachusetts, the fishing town made famous by The Perfect Storm, a big-budget film starring George Clooney.  Based on a true story, the film recounts the tragic 1991 sinking with all hands of the Gloucester-based fishing boat Andrea Gale.

In a case of spectacular bad timing, I had flown home to Massachusetts on the night of the Perfect Storm.  Flights were still arriving at Boston’s Logan Airport, though in such high winds the pilots were opting for hard and fast landings that got their planes on the ground as quickly as possible.  My flight hit the runway so hard I thought the landing gear would come up through the floor.  My train ride from Boston north to Gloucester ended prematurely at a section of washed-out track; I made the rest of the journey in a rain-lashed school bus pressed into service to get homebound commuters to their destinations.  The next day I watched the breakers crash against the rocky coast and listened to news updates on the search for the Andrea Gale.

So in Hong Kong I waited for Typhoon Imbudo with no illusions; I knew the storm could be deadly.  I also knew, however, that I had the good fortune to be safely on land rather than at sea.  And even when I did venture out onto the waves that day, I did so aboard the Star Ferry in the well-protected waters of Victoria Harbor.  The ride proved relatively smooth even on the more unstable top deck, though the plastic storm flaps had been pulled down to keep spray from blowing across the passenger deck, and the wind moaned in the rigging like the sound of a bad dream.  The waters had turned a deep storm blue frothed with whitecaps; dark-grey rain clouds swept overhead as I disembarked on the Kowloon side of the harbor.

As the wind rose, the city’s neon signs began swinging and swaying dangerously over the streets, leaving no doubt in my mind that if Imbudo meant to kill anyone, she would do it with a falling KFC or Lucky Dragon sign.  I figured I should stay off the streets, so I ducked underground and rode the MTR back towards my hotel.  When I emerged from the Lok Fu MTR station, however, the storm’s humid gusts proved so intoxicating that I opted to walk the mile back to my hotel instead of catching a taxi.  Fortunately the rain hadn’t yet begun, for the wind would have quickly inverted and then torn apart my umbrella.  Buckshot blasts of wind-driven grit stung my face and irritated my eyes.  Trash blew down the sidewalks and great spirals of torn plastic bags blew overhead like a flock of circling polystyrene vultures.

I stopped in at the local supermarket, which was doing a brisk business as locals stocked up before the storm.  I did the same, purchasing essential survival rations that would allow me to ride out the typhoon -- sushi and San Miguel beer.  Then I scuttled home, eyes red with wind-blown dust and the first rain drops whipping my face.

My hotel room at the Regal Oriental offered a commanding view of the defunct Kai Tak airport, Victoria Harbor, and Kowloon Peak.  I scarfed sushi and swigged San Miguel as the sky grew progressively darker, the wind speed increased, and then Imbudo herself swept over Kowloon Peak in great blinding curtains of rain that cut visibility to near zero.  The old airport runway and the harbor vanished into undulating curtains of rain.  No traffic moved on the normally busy highway below, where the streetlights bent with each gust of wind and the palm trees turned into weather vanes.

For an hour or so the rain blasted past in great streaming torrents, and then to my surprise the downpour let up and the sky lightened.  I took advantage of this lull and headed back to Kowloon, where I found that an uncharacteristic calm had come over the normally frenetic city.  Few people made their way along the neon-lit sidewalks of Tsim Sha Tsui; the Star Ferry had suspended service.  The waterfront promenade, with its world-famous views of the city skyline, remained virtually deserted.  No ships moved in the channel; no helicopters buzzed overhead.  I marveled at all the different sounds produced by the wind -- whistles, moans, thumps, rustles, rattles.  The turbulent air felt warm and damp, the atmosphere exhilarating.

Despite the weather I had no trouble finding a taxi for the ride back to my hotel.  Taxis, in fact, remained about the only thing moving on the normally busy roads.  I returned to my hotel room just before the rain resumed and Typhoon Warning Signal #8 finally went up.  It turned out I had picked the best possible hotel for riding out a typhoon, since the Regal Oriental used to be located directly under the flight path to the old airport.  The building had been soundproofed to muffle the roar of 747s flying a few hundred feet overhead, so for all its power and fury, Imbudo didn’t even manage to disturb my sleep.  I dozed off to the tempest’s muted pounding against the triple-paned glass, and sometime during the night Imbudo blew out of town like an unruly house guest.

The Hong Kong Observatory dropped typhoon warning #8 the next morning, which meant that many workers hoping for a day off had to head for the office after all.  On my way to the MTR station I walked through Kowloon Walled City Park, where the all-female grounds crew had already cleared the paths of debris.  Only a few fallen trees marked the wrath of Imbudo.  City maintenance crews hadn’t yet cleared the sidewalks outside the park, however, and tangles of broken branches, sodden leaves, palm fronds and overturned trash cans lay in jumbled heaps.

Hong Kong had been spared the brunt of Imbudo, which as predicted passed south of the city to hit the coast of Guangdong and Hainan provinces head-on with winds that occasionally reached Force 12 in strength -- the strongest on the Chinese scale and the equivalent of at least a #9 warning signal.  The storm quickly lost strength as it headed inland, however, and due to advance warnings and emergency preparations, only six people lost their lives.

No lives were lost in Hong Kong, though at least seven people were injured.  As I’d predicted would be the case, falling signs and other debris had proven to be the greatest menace to those on land.  Offshore, meanwhile, air-sea rescue helicopters had spent the night struggling to save 16 crewmen aboard the drifting container ship Fufeng, which wallowed with a broken rudder in what the crew later estimated to be thirty-foot (10-meter) waves.

Hoping for some surf myself, I headed for the south side of Hong Kong Island.  A festive atmosphere reigned along the Stanley Village waterfront, where those who had managed to get the day off congregated to watch the breakers boom against the seawall and explode up in great sloppy gouts of white spray.  Families posed for digital photos against a backdrop of crashing waves and foamy spume.  The humid air smelled of the storm, a heady mix of salt air, rain and wet jungle.  Aside from a few mangled street signs along the seawall, however, Stanley had come through Imbudo unscathed.

Overhead the clouds began to tatter like old cloth; blue sky cracked through the grey.  Offshore the container ships headed out to sea.  The winds fell and the last typhoon warning came down.  Hong Kong, that great engine of commerce, revved back to life.  In the end it had been an imperfect storm, I decided,  but a fine one nonetheless.