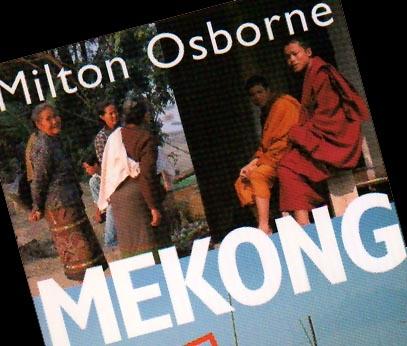 The Mekong, Turbulent Past, Uncertain Future, by Milton Osborne 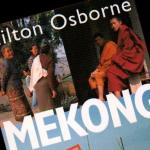 You wouldn't know it if you have lived there, but not much is known about Southeast Asia, particularly about what is now called the Greater Mekong Sub- Region, whose definition is probably unnecessary.  In part this is because the Mekong River, after repeated attempts to prove the contrary, was found to be impassable because of an impassable area known as the Khone Falls.  So the river could not be a water route to the much-vaunted riches of China, and unfortunately the wealth found around the Mekong itself was disappointing.  And it's not as if these countries were given to self-promotion anyway.  In fact they are among the world's most secretive.  The same people who built the largest religious monument in the world, Angkor Wat, only to let it be swallowed by jungle, were also the people to suffer under the Khmer Rouge, which made Cambodia into an informational void from 1975 to 1979. More recently, the hush-hush over the Avian Flu outbreak once again revealed that the area is prone to keeping to itself even when doing so may not serve its long-term interests.

But still waters run deep, and Australian historian Milton Osborne in his The Mekong: Turbulent Past, Uncertain Future shows how the river acts as a kind of metaphor for the region as a whole -- silent but indomitable, superficially placid but prone to explosive violence.  The characterizations were as true during Angkorian times as they were during the two Indochina Wars, when the French and Americans grossly misjudged the natives' commitment to the French civilizing mission or the American Way of Life. Using a different metaphor, Michael Herr in his Dispatches wrote that reading the minds of the Vietnamese was like "reading the wind."

Osborne devotes much of the work to the explorers, most of them French, who braved stultifying heat and tropical maladies in the vain attempt to follow the Mekong to its source in Tibet.  But Osborne also notes the rather surprising fact that even the locals have never much used the Mekong for transport. Perhaps its main function has been as a source of food, a function that for reasons including dams and over-fishing is increasingly under threat.  The Chinese may be blamed for much of the region's deterioration, what with their irrepressible urge to build what Osborne euphemistically refers to as "bluntly functional" architecture, and their tendency to flood sparsely populated regions with tourists and immigrants commonly called "vulgar".  They have replaced the Europeans and Americans as the greatest menace to the region's reputation as a sleepy backwater, with the nations of Southeast Asia scrambling to avoid reverting to their traditional role as vassals of the Middle Kingdom.

Much of the remainder of The Mekong is a rather breezy summary of Southeast Asian history; Osborne reinvents a wheel or two.  But his account is enlivened by his own personal experience in the region as an ambassador, UN adviser, and consultant.  Occasionally he touches on the highly addictive cocktail of hedonism and danger that so often keeps Westerners there. The French particularly, with their unabashed love of life with all its messiness and intrigue, took advantage of the region's surplus of beautiful and accommodating women; but Osborne also produces more than one, usually portly native, attached to his drink and cigars and Western weaponry. These include Sihanouk, the amazingly tenacious monarch of Cambodia, of whom Osborne has written a biography.  Even Osborne begins his history with a celebration of "chilled beer Lao", referring to the country's potent national brew.

The French had their rubber plantations and the Thais their ravenous teak industry; each helped initiate the deforestation that has become one of the region's (and the world's) most pressing problems. Osborne points out that outside attempts to limit the damage may be futile because of the region's lawlessness.

Ultimately all environmental deterioration can be blamed on overpopulation.  This is not a problem facing Laos, Cambodia or Burma particularly, but that is why the crowded nations of Thailand, Vietnam and China eye the former countries so hungrily.  Unfortunately one of the most obvious ill effects of deforestation is flooding, especially in a region that was already susceptible to it.  And when a river like the Mekong is filled with eroded soil the fish die, which would tend to create catastrophic food shortages and thus a reduction in population.  But so far the most notable reductions in population growth have occurred as a result of wars or the AIDS epidemic, the new face of what Osborne cites one writer as calling the Western "syphilisation" region.  Cambodia's AIDS problem was a direct result of the UN's presence there following the Vietnamese occupation, and there would be fewer hookers in Thailand had the Americans not been in Vietnam.

But despite the region's manifold problems in the present, one should resist the temptation to romanticize the past.  Osborne tries, but one can hardly avoid the patent difference in romantic value between the words (still more the places) Saigon and Ho Chi Minh City, or Siam and Thailand.  No person of European ancestry can fail to highlight the charm of colonial times.  And although those times were perhaps not as bad as the Communists said they were, they were more fun for the imperialists than for their subjects -- or at least those subjects, and there were many, who were not in the imperialists' pockets.  A flowering or a deflowering of indigenous culture?  The jury's still out on what colonialism wrought.  But one of the sexiest pronunciations of the word "Mekong" was that made by the narrator of the film The Lover, even though she pronounced it "me" and not "mae", which is how the Thais and French pronounce it.  Whence une monomanie du Mekong, the condition, according to Osborne, from which one of the better-known French explorers suffered.

Proponents of Asian solidarity may be surprised to learn that early Chinese visitors to the region were just as puzzled by its people as the Europeans would later be.

Both were, or pretended to be, scandalized by what Osborne calls their "distinctive sexual mores", which at various times were said to include going about topless, widespread infidelity, and even what might indelicately be called fucking in the streets.  Osborne is correct to note the hypocrisy often involved in judgments of what is, after all, the more natural attitude toward sex attributed to these places, with his frequent references toward the thinly disguised sexual tension felt by some of the explorers.  Indeed part of the allure of Angkor is that it is nearly as much a monument to sex as to the spirit, and a study in the intersection of the two. Osborne writes:  "In the case of Isanavarman, [a Khmer king] who ruled in the seventh century, an inscription boasts that women of his court felt it would have been worth rape by the enemy to be a recipient of his smile."  This was well before the Angkor period, but those kings too would combine a lust for religion with less religious lusts.  That one of the main features of Khmer architecture is the phallic lingam further attests to the synthesis.

Sadly the occasional tendency of the Westerners and the Chinese to regard the peoples of the Mekong as "coarse" and "ridiculous" animals has not entirely vanished.  Saying that Vietnamese are gooks or that Thais are sleazy amounts to the same thing.  And Osborne refers to the Chinese attitude toward its "National Minorities", including the Dai people, ethnic relatives of the Thais and Laotians. "I would see paintings for sale in tourist shops showing Dai women bathing topless in the Mekong," he writes, but a Dai woman tells him that such paintings are "a Han Chinese fantasy."  All the more appalling for being real were Chinese plans for an ethnic minority "theme park".  But the rule of the pecking order dictates that while the Chinese put the Dai on stage to generate amusement and revenue, the Thais do the same to the hill tribes. That this occurs at all is one of the less happy consequences of the nation-state system, in which dominant ethnic groups squeeze the rest.

Happier, and one of the main reasons anyone would write an entire book about the Mekong region, is this. Lord God, how gorgeous it is!  "Such a beautiful world,"

Osborne quotes a French traveler as saying, "so strongly seductive that one simply cannot leave it without sadness."  That Osborne has chosen this as a chapter's epigraph shows that he strongly agrees, and rightly so.  We are territorial creatures, and our love for a place has much to do with our attachment to its natural features.  I have strolled by the Mekong in Phnom Penh and Vientiane, and half the reason I picked up this delightful book of Osborne's was to do so again.