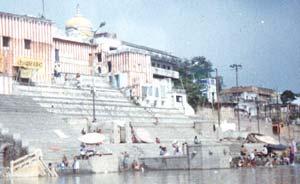 Lining the holy river are buildings like these, the bottoms of their long stairs reaching well below the surface. People come here to wash, frolic, or sit in quiet contemplation. 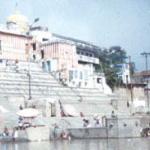 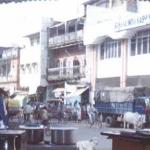 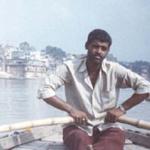 Travelling in India cannot be called a vacation. It is closer to a species of trauma, or a potent drug, best taken in small doses to build one's tolerance for it. You go to India, as one Indian writer put it, "for the hell of it" -- the inferno of it. It is, V.S. Naipaul wrote, "an assault on the senses"; and Bombay is a "crowd."

I had lived in Bombay for half a year and had returned once for a visit. I thought I knew a thing or two. Needless to say, this was folly. India is as multiple as the firmament. You could traverse it for the whole of your life and not know - still less understand - its superficies.

This is not to say that there is no value in trying. Before I went to Varanasi (formerly Benares), I had been trying once again to approach India from the safe, oblique angle of its religious literature: the Bhagavad Gita and the writings of Swami Vivekananda, the charismatic proponent of the Vedanta movement, who almost singlehandedly spawned a renaissance of interest in Hinduism. Vivekananda too had traveled all over India in a quest to know it, much as Gandhi would years later. This journey convinced Vivekananda that despite India's abject poverty and superstitions, it had a valuable message for the world.

Essentially, this message was the Vedantism of the Gita itself, distilled into the Sanskrit phrase tat tvam asi, or "thou art that." In Vivekananda's more strident rhetoric:

"You are all God, O ye men and O ye animals, and living beings, you are all manifestations of the one living Deity!"

This quote is taken from a small, yellowed volume of Romain Rolland's biography of Vivekananda, which I bought in a Varanasi bookshop. It became my alternative guidebook for the trip.

Many Westerns go to India for spiritual reasons akin to my newfound affinity for Vivekananda. Sadly, just as many go thirsting for a spirituality more spurious. Indians, eager to make a living, are more than happy to quench it. Reiki, yoga, and transcendental meditation are just a few of these hobbies, taken up quickly and as quickly abandoned.

Indian spirituality runs deeper than these discouraging fads, and stronger than in any other land. Because at bottom this spirituality is nothing more than the Vedantist idea that however much we may differ in appearance or ideology, we are basically identical. Every living thing has an atman, or soul, and every atman is part of the same brahman, or what Emerson called the Over-soul. To love another is to love oneself is to love the whole of existence. For a Westerner to not only believe this, but to also put it into practice, is a much more arduous task than learning a few yoga asanas, or postures; but because it cannot be taught in a twelve-week program, it is seldom taught.

Except, that is, through interactions with Indians themselves. It is hard work to be alone in India. You are constantly approached, inquired of, befriended. You are invited for dinners with families you have met minutes ago. You see a gleam in the eyes of strangers which says, "We are, after all, not strangers at all, but one thing."

Other evidence of this living faith is not so easy for Westerners to accept. You are squeezed into a bus packed so full that your face is mashed into a woman's rank armpit. You are touched in a carefree way in places on your body that you regard as off-limits to strange hands. You meet so many people inquiring after your country of origin and "how you find India" that you cannot bear to be asked these questions again. You just want to be alone in the most populated nation in the world, whose entire population thinks that they are you.

It takes a long time to get used to this absence of a wall between people. You never fully get used to it. The wall is part of a propriety, based upon the Western focus on individuality, that not even a life-long assault would destroy. Puncture the wall, however, these assaults do; so that, once you leave India and scurry behind your wall, you are liable to find it a lonely, alienating place.

We were not an hour off the plane in Varanasi before we were approached by a young Indian man who wanted us to share a taxi with him to the city center. He sat in the front seat and talked with us nonchalantly, his arm casually draped behind the driver, who grumbled at the erratic traffic of cows and autorickshaws. The young man, a resident of Delhi, was returning to Varanasi to see his family. Would we like to meet them?

We agreed and were brought to his house. We sat in the living room, while relatives of all ages sat around us. They were customarily intrigued, and not a little concerned, by my girlfriend and I not being married, and by our distance from our parents. They did their best to fill us with sweet Indian tea and "biscuits." My girlfriend probably felt rather unsettled by this hospitality, which takes a much gentler, unassuming form in her native Thailand. As for me, I felt like I had come home.

We said our goodbyes and politely refused offers to guide us around Varanasi. We found a hotel a short walk from the Ganges River. The stairs of the hotel were covered in dead, hard-shelled insects - locusts, perhaps - and they crunched under our shoes as we ascended. A man busily swept the insects from the concrete of the top floor.

Tea was delivered to our room in a grimy thermos. Drinking it on the verandah, we gazed at Varanasi's crowded buildings and congested, wire-crossed streets. Sadhus, the Hindu holy men wearing their characteristic orange garb which stood out against the dull concrete and filth, flooded the streets as if carrying out some kind of invasion. Some were, in fact, Westerners. The proprietor of our hotel would later say of these converts, "They think God is here." He did not mean this deprecatingly. God, he implied, is here.

Our time in Varanasi coincided with the festival of Diwali, the festival of lights. In the cities, Diwali would more aptly be named the festival of carelessly thrown and painfully loud firecrackers. Having one of these explode inches from my head, during Diwali in Agra the year prior, diminished my love for the festival somewhat. In Varanasi, the crackers continued well into the wee hours, and we were forever leaping out of their threatening paths.

Daytime was quiet by comparison, though Indian metropolises are never quiet in absolute terms. Taxi horns tendered their complaints, Muslim prayers blasted from ear-splitting megaphones, buses grumbled and gnashed at their gears. Every now and again a fusillade of shouts would go up, causing the crowds on the streets leading down to the Ganges to part. The shouts came nearer, and presently a team of pallbearers ran a fresh corpse on a stretcher down to the ghats, the crematoria on the river banks.

The best way to see these crematoria is from the middle of the Ganges itself, and there are many boatsmen eager to row for you. The sun blazes viciously on the viscous, dishwater-gray water, but the spectacle is worth the sunburn. Cords of wood spilt from the ghats await their holy function, while the Hindu devout wade, jump, play, and soap themselves in the holiest river.

Feelings of spirituality this may inspire are nothing, however, compared to witnessing the sometimes heroic, sometimes piteous, struggle of the masses of India merely to survive. Beggars and vendors are more desperate and persistent here than anywhere. Shopping is like being flogged, and sometimes commerce is fused with religion to a contemptible degree. Entering one of a multitude of fabric shops, we were talked into taking part in a puja, or Hindu religious ceremony, intended to bring prosperity to the shopowners. A brahmin uttered Sanskrit prayers, beseeched us to eat bananas, marked our foreheads with tikkas, and gave us each a puja string, worn as a bracelet. Puja at an end, the shopowner tried to persuade us that, as a guarantee of his prosperity, we should buy things we did not want. We bought many, not from any faith in purchases as directors of fate, but from fatigue resulting from his pleas.

Night had fallen by the time we left. We had moved to a hotel closer to the river, and from the room's terrace we could see its dark expanse, lit like stars by Diwali candles afloat. Spectacular fireworks arced through the sky, while from the city came a constant popping like semi-automatic gunfire.

To travel in India, I repeat, is not to take a vacation. Usually, one must take a vacation from one's trip in India. You leave its shores exhausted, numb, often thinner, sometimes ill. But you leave also with the impression that you have lived, more deeply than is possible elsewhere. You have seen humanity at its opposites, the animal and the divine. Always glad to leave, you will soon want nothing more than to return.