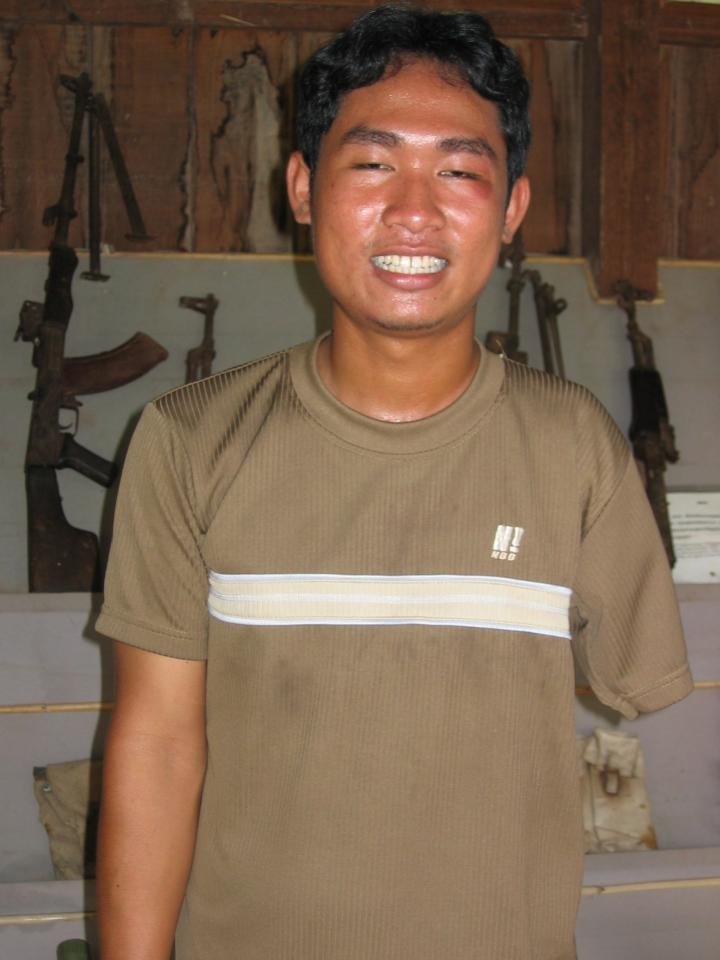 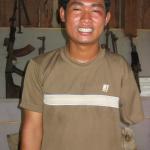 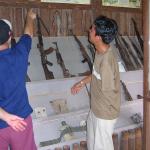 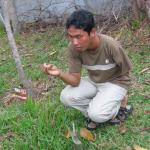 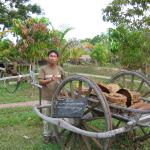 Khom acted as our tour guide at a war museum in Siem Reap, Cambodia. “Museum” might be a bit of a misnomer for the collection of old weapons, faded photographs and rusting military vehicles which have been amassed in a bumpy grassy field surrounded by a concrete fence. Khom is proud of this rag tag display however because it provides a way of informing interested tourists about the devastation that has been caused in his country by land mines.

At age five Khom was traveling to the market with his parents when their ox cart hit a land mine. His mother and father were killed and he lost his arm. Some Buddhist monks took in little Khom and raised him. He was too young to remember his parents’ real names and in a country whose infrastructure had been completely destroyed by years of war and government corruption there was no way to find his relatives. Khom became an orphan in every sense of the word.

Khom is only one sad statistic when it comes to land mines in Cambodia. Experts estimate that more than 60,000 people have died in Cambodia in the last fifteen years because of them. 30,000 of these were young children playing or working in their family’s fields. After the bloody reign of Pol Pot ended in 1979 there were some 12 million landmines left in Cambodian soil. Initiatives by the international community have resulted in the removal of 6 million of those landmines. Not a day goes by however when three or four people aren’t killed or injured by landmines in Cambodia.

Khom showed me samples of the more than fifty kinds of landmines which lie buried in his country’s soil. Attempts have been made to place warning signs in areas known to be dangerous, however since over half the population of Cambodia is illiterate these signs are not always effective. Most of Cambodia’s educational institutions were destroyed during the Pol Pot regime and 90% of its teachers were murdered. It will be a long time before illiteracy statistics improve in this impoverished country where the majority of children work to support their families rather than attend school.

I asked Khom how he feels about Americans. It was as a back lash to the carpet bombing of Cambodia ordered by Richard Nixon that Pol Phot’s Khmer Rouge army was able to gain strength and overthrow the Cambodian monarchy. “I don’t hate them”, he said. “Many kind Americans have come to Cambodia to try to help us since the war ended.”

I asked Khom how he felt about his fellow countrymen who had joined the Pol Phot forces and participated in the massacre they carried out. “I don’t hate them”, he said. “Many were forced to become part of the Khmer Rouge at gunpoint. Some were starving and had to join the army to eat. I don’t blame them.”

I marveled at how Khom could forgive those who created the conditions in his country that were responsible for his parent’s death and the loss of his arm.  I marveled at his hope for the future.

”I am studying English at the college” he told me. “I want to be a teacher and open up a school for all the orphan children of Siem Reap. I would also like to become a writer and write books about the civil war in the Khmer language to help school children understand what has happened in their country.”