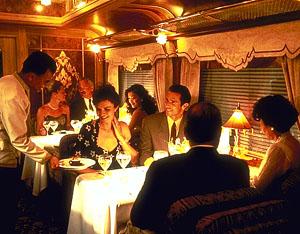 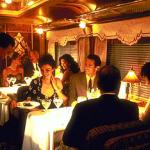 Was that gleaming green and beige train, that symbol of romance, mystery and luxury, deliberately placed at the platform furthest from the waiting room at Bangkok's Hua Lamphong railway station? I suspect so, for how else were the 100-plus guests heading for dinner on the Eastern and Oriental Express supposed to show off their threads to anyone besides themselves that night?

It was a fantastic parade to the waiting train; colourful chiffons and silks rippled in the slight breeze (most of the hairstyles didn't), elegant heels clicked on the cement floor, and black tuxedos provided a note of seriousness. Although there was a touch of confusion over where exactly to board, the impeccably uniformed staff steered people safely in. Some headed straight to the Bar Car, where cocktails were soon shaken over purified ice and champagne bottles popped; the pianist tinkled the ivories as the volume of laughing voices rose and the soft-light from the French lamps made everyone look tanned and gorgeous.

And we hadn't even left.

So far all was swish, smart and sumptuous, and everyone there knew it. The Eastern and Oriental's inaugural dinner journey from Hua Lamphong Station and back - the destination was hardly the point - was warming up to be an extravagant, ostentatious affair.

A group of American backpackers stared open-mouthed at the - let's face it - incongruous train and its glamorous inhabitants. The camera flashes popped, but hardly anyone on board noticed. This is a train where what's going on indoors matters far more than what's flashing by - whether it be geography or the local population.

When the engine car started its pull, the romance really began. It didn't matter where we were going (Ban Pachi, actually), so long as the carriages were gently, lovingly rocking slightly from side to side and making that comforting background noise of 'ka-ra-ka-da-khom', which incidentally is Thai for July.

We waved goodbye to a fantastic frangipani tree that lights up the night on its own as you leave the station, and settled back to sip some more chilled white wine - charged for in US dollars, as were all on-board purchases, but very reasonably priced.

We were off, and it seemed like anything could happen. It's a recipe that requires a train to be made really special: men and women in their finest, alcohol flowing, atmospheric lighting, a tropical night... And for once, someone had remembered the train.

We were in an Agatha Christie movie. Or the boardgame Cluedo had sprung to life. We were, at the very least, back in that era when every other country in Southeast Asia was being colonised - except Thailand, as many an inconvenienced historian and travel writer has noted.

It was time to prowl through the rest of the train, exploring the three choices of sleeping compartments, either made up or pulled down ready for bed. Although an announcement at the beginning of the trip made clear that these rooms were not for personal use - to the squeals of naughty disappointment from many - the occasional group retired to these carriages for some extra space and quietness (leaving the doors open, as proper British etiquette of course requires).

The organisers no doubt hoped that this display would eventually tempt some diners back for a longer journey. The E and O (as those in the know call it) regularly runs the 2,030 km trip from Singapore through Kuala Lumpur to Bangkok and back, carrying up to 132 passengers on each trip, and is now also running trips from Bangkok to Chiang Mai. Journeys to Angkor Wat are planned eventually.

Since it started its Bangkok-Singapore run in 1993, the half-a-kilometre train has carried over 40,000 passengers. The carriages were Japanese-built in 1972, and the train first operated as the Silver Star in New Zealand. The carriages were later shipped to Singapore, where they were refurbished and made compatible with the Thai and Malaysian railway systems.

Wooden marquetry with an Asian theme sets the moods throughout the train: various cars feature Chinese and Thai lacquer, Malaysian motifs, and Thai wall carvings. Behind the marquetry lies a fire-proof lining, to help keep the interior cool and muffle the engine noise. It also seems to create a nice acoustic effect when shiny silver cutlery hits plates and crystal glasses clink.

Back in the Bar Car, a passenger had been berated for using a mobile phone. A voice making an announcement banning their use had struggled to be heard over the excitement as we departed the station. Perhaps this ban should be printed on the discreet piece of paper handed to passengers with their boarding passes warning them about other things (such smoking not being permitted except on the open-deck Observation Car).

As the two restaurant cars can serve 70 people in one setting, two separate settings were scheduled for the evening. We slunk down the softly-lit passageways towards the Singapura restaurant at 9.15pm for the second setting, already warm and very cheerful from our pre-dinner drinks.

We passed the in-train astrologer, providing guests with further entertainment in the Reading Room. (I'm sure she envisioned more rail travel for everyone...)

When the surroundings are so gorgeous, one can begin to suspect that the food might be relegated to second place. But this was not to be so: the unfaultable food could be the very reason many of the original guests return to board again.

A tiny, delicate cup of amuse bouche - all the rage in New York at the moment - whetted guests' appetites as some considered looking out the train window for the first time that evening, and others marvelled at the fine porcelain, sparkling crystalware and French silverware.

Then a dish of tandoori of snowfish, served with a fricassee of fennel in fragrant red wine sauce was served - with a silent flourish, it's probably unnecessary to add - from the attentive waiters. The fish was moist and the flavours were strong enough to satisfy Thai palates without killing the scent of the fish.

Could it get any better? You bet. Nage lobster was served in a fine green curry sauce. The wine kept coming - De Bortoli's Willowglen Shiraz Cabernet and Willowglen Semillon Chardonnay was served as part of the meal. The train kept rocking. The crystal kept glittering. And time was ticking away. We were returning to Bangkok! The wine was making us blurry! It was soon going to be over!

Dessert was baked banana in a light, mouth-watering pastry case and a duet of sauces, then petit fours and Columbian coffee to sober us up (a little). Chef Kevin Cape had devised a creative menu fit for any five-star hotel. And to be able to serve such exquisite food from a train kitchen only makes his skill all the more impressive.

The Observation Car, at the front of the train for the return journey, beckoned next with its fresh, warm breeze - even the Bangkok air seemed breathable as we pulled into Hua Lamphong and clamoured back onto the platform and into the real world again.

There was one disappointment to be had in the five hours of snaking our way through the Thai night in style: there was no blood-curdling cry from any of the plush compartments, and no shriek of horror as someone's diamonds were stolen from their neck at dinner. A good old-fashioned murder or theft would have topped off the evening's whodunnit atmosphere nicely.

Alas, this was an occasion for Bangkok's refined set, a mixture of expatriates and Thais whose crimes were more likely to be in the white-collar department.