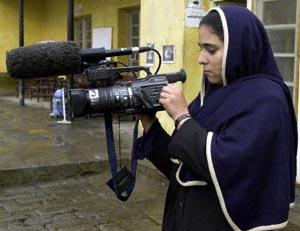 Afghan woman, Mehrya, is one of 13 trained by the French non-governmental organization Aina (mirror) as a camerawoman. 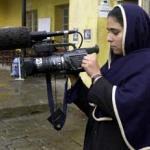 Two years after the fall of the Taliban regime which forced her to view the world through the mesh window of her burqa, Mehrya is more often seen these days behind the lens of her digital video-camera. "Women were jailed at home under the Taliban, being a camerawoman was just a dream," said Mehrya, one of 13 women trained as Afghanistan's first broadcast news camerawomen and documentary filmmakers. "I'm very happy and feel proud that my dreams came true," said the 19-year-old, who like many other Afghand uses just one name.

Mehrya and 12 other women were trained by the French non-governmental organisation Aina ("Mirror") which is helping to develop independent media in Afghanistan. Two years after the fall of the Taliban who outlawed photography and films as un-Islamic and barred women from public life, Mehrya and her colleagues still face challenges in a country burdened with the legacy of the hardline militia.

"We have lots of problems filming in public," she said. "When we go out in public to film, we have to take a man with us for our safety," she explained.

Brought up in a liberal urban family, Mehrya did not face any problems following her dream of becoming a camerawoman, unlike some of her fellow students who first had to win over their relatives. "My parents agreed, but my brothers still really don't like it," said another burqa-clad camerawoman who wished to remain anonymous. "The other problem is the burqa: when we are filming we have to take it off which my family really don't like," she said.

Two years after the toppling of the hardline Taliban regime which forced women to stay at home and denied girls an education, Afghan society remains largely conservative. But for Mehrya, it is not the first time she has challenged stereotypes.

During the Taliban's harsh 1996-2001 rule, she ran an underground school for girls in her home in Kabul's Kart-e-Parwan district. Mehrya is now also the main breadwinner for her family of nine. With the 250 dollars a month she earns as a camerawoman, she is the main support as her mother earns 45 dollars a month, which only pays half of their rent. "I like my job. Besides being fun, I can also help my family," Mehrya said.

During the year-long course, the camerawomen made three documentary films about life in post-Taliban Afghanistan. One showed the plight of women in the provinces, another focused on women in jail while the third looked at child labourers. While their films have been aired on French television, they have so far not been shown in Afghanistan itself. Two years after the fall of the Taliban, state-run Kabul television still bars broadcasts of women singers and dancers. And while Mehrya and two of her colleagues got jobs with Aina after their course ended in June, the other would be filmmakers have yet to find jobs to use their skills.