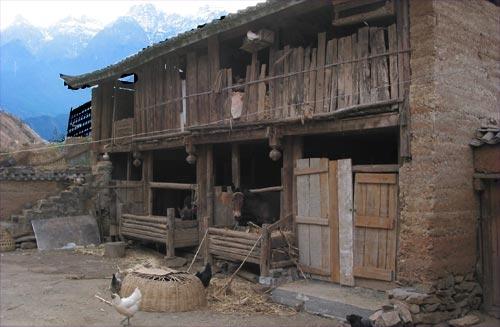 One of the many Naxi Guesthouses along the trail 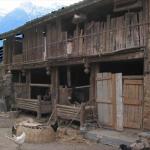 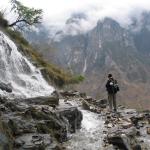 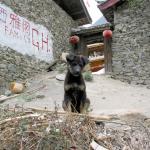 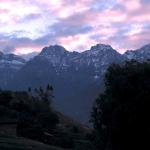 My brother and I caught the 3-hour-long afternoon bus ride from Lijiang to Qiaotou. I was looking forward to escaping the frantic traffic, ringing cell phones, smog, pushy shoppers and hive-like swarms of activity elsewhere in China’s cities. We were on our way to hike Tiger Leaping Gorge, said to be the deepest river gorge in the world, and one of China’s most pristine natural areas.

The town of Qiaotou is located about 60 km north of Lijiang, in Yunnan province (southwestern China), at the eastern reaches of the Himalayas. Here the Yangtze, known locally as the Golden Sands River, making a drastic elbow turn and flows north through Tiger Leaping Gorge. It barrels through 21 rapids in the course of about 15 km, between the Jade Dragon Snow Mountain (5,596m) and the Haba Xueshan Mountain (5,396 m).

Legend says that to escape a hunter, a tiger jumped across the narrowest point of the gorge, about 25 meters wide. Two roads allow the current residents and visitors to traverse the gorge today. The high road is approximately 22 km long and was once a trade route where Tibetan horses were exchanged for tea from Yunnan. It can be hiked in as little as 2 days, and is still actively used by local villagers. The lower road was once a mule track, but has recently been widened and paved; bringing scores of Chinese tourists to see the furthest reaches of the gorge.

Qiaotou is a quaint little river town straddling the Yangtze. The bus dropped us off near the central market, where a group of Yi women sat packed in the back of a truck. They wore ornate gowns, large silver earrings, and giant black mortarboards perched on their heads, looking as though they’d just graduated from high school.

We got up before sunrise the next morning, crossed the bridge over the Yangtze, and walked through the schoolyard. The toll collector hadn’t gotten up yet, so entrance to the trail was free.  Wild geraniums, iris and rhododendron lined much of the trail and scented the air. The Yangtze churned below, always to our right. Beyond it, Snow Dragon Jade Mountain, rose from the river majestically. The base of its black towers formed the epicenter of an earthquake that nearly flattened the city of Lijiang in 1996.

We passed camphor trees, pine, and stands of bamboo, eventually coming to a small Naxi village hidden in a hanging valley. The outer walls of the homes were stone or mud brick, and the inner courtyards were wooden. Enormous red stacks of chaff stood by old barns overlooking terraced rice patties and fields of corn and wheat.

Naxi, Yi, and Tibetans are not the only inhabitants of the gorge. The endangered Yunnan Golden Monkey (Rhinopithecus bieti) also makes its home in the gorge, although rarely seen. Golden monkeys have a ghostly appearance, with a pale face, vacant black eyes and slits for nostrils. They live higher than any other monkey species in the world and primarily eat lichens on the fir and spruce trees growing on the mountainside. Once thought extinct, there are as few as 1,000 individuals remaining in the wild. Extensive logging has reduced their habitat to the most isolated spots in the country.

Soon we came to a stretch of the trail known as 28 Bends. This was the most physically difficult portion of the hike for me. It’s a switchback winding up the mountain at steep angles, well beyond the said number of bends. It was dark when we reached the Tea Horse Trading Guest House, and I was ready to collapse. We quickly ate a hot dinner underneath an overhang in the courtyard, and then went off to bed.

When we awoke the next morning, it was still raining. Our hosts were Naxi, like most of the people who live in the villages along the trail. The lady of the house, with her traditional blue cap, apron and silver earrings, spoke English well. We asked her about the relationships between men and women in her village. She explained to us that Naxi are matriarchal. Women may take temporary consorts, but much of the time they live without a man in the house.

By 9 am the rain finally stopped and we were on our way. We stopped for lunch in Bendiwan village at Feng De Fang’s Halfway Guest House, home of the renowned “Number One Toilet in Heaven and Earth.” Michael Palin would stop there a few months later on his Himalaya trek.

I was relieved when the trail finally descended to meet the low road after Tina’s Guest House, although the climb down was almost as difficult as the climb up. It was the middle of the afternoon when we reached Sean’s Guesthouse, and we decided to stop for the day. Sean’s is the oldest inn at the Walnut Grove village. Sean is Tibetan, and the one who marked the entire high trail with helpful yellow arrows and signs. His Australian wife Margo also runs the “Gorged Tiger Café” in Qiaotou.

That evening we sat on the terrace with glasses of hot tea, while others told us about the dreary future of Tiger Leaping Gorge. I was disturbed to learn that in 2008 the government is scheduled to begin construction of a proposed 278m-high (912ft) hydroelectric dam and flood the gorge, creating a reservoir 125 miles long. It would actually dwarf the highly controversial 185m-high Three Gorges Dam. If the dam is completed, villages like Walnut Grove will be lost, and up to 100,000 people will be forced to relocate.

The project is a joint venture between the provincial government of Yunnan province and a subsidiary of the China Huaneng Group. The company is run by Li Xiaopeng, the son of the former prime minister, and the driving force behind construction of the Three Gorges Dam. Local communities and environmental groups are frustrated that the entire planning and preparation process for the dam is being conducted in secret. Local villagers have not been consulted about any stage of the development.

The potential loss of ecotourism due to the dam could have devastating effects on the community that remains. Many of the families in the gorge lived in extreme poverty before hikers began visiting the gorge in substantial numbers. After tourism came to the area, many people switched from subsistence farming to running inns and working as guides, generating a substantial new income that brought education, better nutrition and modern conveniences like electricity and telephone service. The new opportunities also gave locals an even deeper appreciation and desire to protect the environment as a valuable resource. Inn owners and guides complain that only the investors and local government will benefit from the dam. Even the electricity itself may never reach local residents. Reportedly, it will be directed to other parts of China and even be sold to neighboring countries like Burma, Thailand and Vietnam.

Environmental impacts may be unrecoverable. The reservoir will destroy habitat for local flora and fauna, including the Yunnan Golden Monkey. The gorge is also an active seismic zone, creating fears that the dam could increase the likelihood of future earthquakes such as the one that flattened Lijiang in 1996, and could in turn cause instability or even failure in the dam itself.

I came to Tiger Leaping Gorge to escape the freight train of modern progress in China’s cities, only to find it bearing down even here with all the power of the Yangtze. It may be impossible to stop construction of the new dam, and divert the potential cultural and ecological disaster waiting to flood the gorge. Local and International outcries over construction of the Three Gorges Dam fell on deaf ears. The most practical advice I can give is to visit the gorge soon, before it’s changed forever.

You must be in good shape to hike the gorge. No climbing equipment is needed but if you have a serious problem with heights, you should not attempt the trek. Trails follow edges of cliff faces that drop for thousands of feet. Tourists have died by wondering off the trail and falling or being buried in landslides. Bring warm and cool-weather clothing, and bottled water for the 2-day hike.

The city of Lijiang is located in Yunnan province. Busses leave every hour from Lijiang to Qiaotou via the long-distance bus station, between 7:30 am and 5:00 pm. Busses go the other direction from 9:00 am to 7:40 pm. The current price is Y20.

Accommodations in Qiaotou include Jane’s Guesthouse (880-6570) and the “Youth Hostel.” Dining includes the aforementioned Gorged Tiger Café (880-6300) and Shen Jian’s Backpacker’s Café. Pick up maps, the latest news about trail conditions, and leave excess baggage at any of these places.

There are numerous inns on the trail, including the Naxi Family, Halfway Lodge, Five Fingers, Tina’s, and the Tea Horse Trading Guest House. Towards the end at Daju, stay at Sean’s Spring Guesthouse (880-6300) www.tigerleapinggorge.com or Chateau de Woody. Prices are all about Y15, and serve meals (meals are extra).

**This article is an edited (abbreviated) version. To read the entire story with additional photos, visit the author's blog at: http://fisheggtree.blogspot.com/2008/02/leaping-tiger-must-learn-to-swim.html

The Challenges of Being a Writer in Vietnam

Evolution of a Mid-Autumn Festival Float

Escape to the Binh Thuan Desert