All aboard the Baghdad-to-Basra "express" 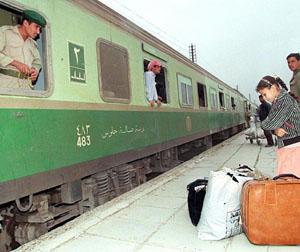 BASRA, Iraq, May 20, 2003 - The daily Baghdad-to-Basra "express" train may take 12 hours, the carriages might be windowless and filthy, it may be even worse than it was before the war in Iraq, but paying passengers are coming aboard again.

A ticket for the 500-kilometre (300-mile) trip, which resumed two weeks ago, costs 1,000 dinars (one dollar), or twice that for a seat in a compartment. "It's safer than travelling by car and less expensive," said Nasser Hussein a 24-year-old law student returning to visit his family in Baghdad. He was travelling with his uncle, who was quick to complain about the lack of comfort and services on board.

On the outward trip, the pair neglected to take water and food with them, thinking that they'd be able to buy them on the train as was the case before the US-led war to oust Saddam Hussein's regime. Passengers wait at stations for hours before the train leaves: departure and arrival times are not printed on the tickets. "We will be in Baghdad at 7 pm, 8 pm or 9 pm," the conductor Thia Mohammed announces.

There is certainly nothing wrong with the locomotive. "It is a new one, from China, 2002," boasts Mohammed. Four conductors work the 12-hour trip in two-man shifts. Arriving in Baghdad, the men spend the night on the train because the building reserved for them has, like the rest of the station, been completely ransacked. Guards get on the back and front of the train. "What good is that? They're not armed," bemoans Mohammed, who fears being ambushed.

First or second class, there's no air conditioning. Each carriage has smashed windows and dust-encrusted seats. The stench from the toilets is enough to make you not want to go. Before the train pulls out, women use brushes and shovels to clean out kilos of rubbish from each carriage.

Unemployed since the war, Feruz Radi was heading back to his home in Nassiriya. Sweating heavily, he uses his book as a fan. Behind him, two young women sat close to a glass-less window "to get more air."

"It's a cattle train, not one for human beings," said one young man trying to make his way down the aisle. The train is not full, but "there are more and more passengers, more than we could hope for," according to controller Mohammed Fakhri.

An ad hoc station buffet is set up on a plank of wood set on bricks. Small Iranian biscuits, cigarettes and tepid fizzy drinks are rapidly bought up by passengers. Most train conductors have not come back to work. "An issue of salaries," according to Mohammed. "For four months of work I've only got 20 dollars from the Americans. "We were promised 10,000 dinars (10 dollars) for a return trip but we're still waiting," lamented the 12-year veteran of the Baghdad-Basra route.