Angkor Wat from the Outside 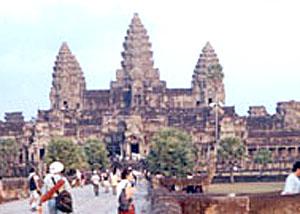 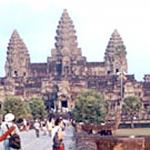 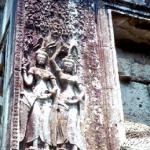 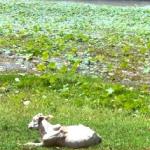 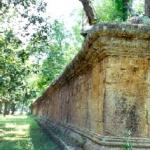 Among the magnificent collection of ancient temples in Cambodia's sprawling Angkor complex, the most famous of the bunch is the jewel known as Angkor Wat. This much-photographed building, touted as the largest temple in the world, draws thousands of tourists every day of the week. Many early risers like to stumble through the pre-dawn darkness and secure a vantage spot inside Angkor's front wall in order to watch the sunrise. Others make their pilgrimage later in the day, anxious to marvel at the temple's five majestic towers and the wealth of awesome carvings and bas-reliefs found within the inner halls.

One thing is constant: all tourists visiting Angkor Wat, no matter if they are part of a tour group or traveling individually, must arrive at the west side entrance to the temple where a team of friendly guards checks their Angkor day passes for authenticity. After that procedure is out of the way, it's a long un-shaded walk down a naga-incrusted causeway that crosses over the moat-like channel of water surrounding Angkor Wat. Once you've passed through this first entrance, the front gate so to speak, it's another long un-shaded hike to the actual 'front door' of Angkor Wat, where the intricate sandstone carvings and other delights await your perusal.

Nearly every visitor to Angkor Wat enters and exits the site in this same manner. Most don't consider that there might be another way in, or that there is more than angle from which to photograph the exterior. Since this front door route is the way that all tourists are ushered in and out, it must be the best way to see Angkor Wat, right? Well...maybe not.

Acting on a tip from my friend Al, who had visited Angkor Wat the previous month, I adopted a different tactic for my tour this time: I walked around the outside. That's right. Instead of obediently following the masses in sheep-like fashion through the front entrance, I walked around the exterior of the massive structure, staying between the outer wall and the water that surrounds the temple. It wasn't like I was locked out and prevented from seeing anything, mind you. While circumnavigating Angkor Wat in this manner I still had the chance to sporadically duck inside the compound and poke around the ruins whenever there was an opening in the wall. This meandering route took me nearly 90-minutes to complete - at a far from frenetic pace - and offered a fascinating glimpse of the grand temple from a totally different perspective.

When Al had suggested that I take this walk as a way to deviate from the normal Angkor Wat tour, the idea intrigued me, yet the thought of walking around the outside didn't sound like the most stimulating way to spend an afternoon, in or my case, the better part of the morning. I mean, just how interesting can the exterior of a crumbling old wall be, anyhow? Well, I soon discovered that not everything that merits observation at Angkor Wat is necessarily found in the inner sanctum of the temple. Sure, the detailed carvings and bas-reliefs that receive such high praises from visitors can only be seen by venturing inside, but there are plenty of other marvelous surprises to be found in and around the outer walls. While following the outside path, I was delighted to discover an abundance of interesting ruins and carvings in and around the 'other' three entrances that lead to the temple - ones that I hadn't seen on two previous trips to Angkor Wat. In addition these architectural wonders, I observed slices of sweet, normal Cambodian life; children swimming, water buffaloes grazing, people gathering wood, birds chirping and smiling kids riding by on bikes.

Another bonus was that most of the route was mercifully shaded from the scorching summer sun by tall trees. Not only was the walk scenic and shaded, it was lusciously quiet and peaceful. It was as if I was on some private backwoods nature trail, taking a stroll through a brilliant forest. Part of the reason for that tranquility was the fact that there was not a single other tourist to be found anywhere on my side of the wall. Other than the occasional Khmer native strolling by, I had this side of the temple all to myself. I suppose most tourists are indeed hand-held by their guides, taken in and out the same exact way, and never allowed nor encouraged to venture any further beyond the 'normal' paths. Everything was so utterly perfect I kept waiting for an army of tourists to shatter the feeling of serenity. That never happened, even though only a few hundred yards away, there were undoubtedly throngs of sweaty tour groups traipsing through the heart of the temple, doing their best not to bruise one another with their telephoto lenses.

I started my walk by approaching Angkor Wat from the main entrance on the west side, just like everyone else. After I reached the end of the causeway, instead of following the rest of the pack into the temple proper, I veered off to the right and took a narrow dirt path between the wall and the moat. Along this route I frequently stumbled upon broken columns and blocks of stone, many them sporting cool carvings and designs, lying in the grass like discarded bottles. I couldn't help but wonder what the story was behind this lovely rubble. Where in the temple had it been positioned originally? What was its purpose? Who designed it? And why was it sitting there so incongruously out of place in the middle of the tall grass? Further away, near the water, were even more pieces of carved stone, except these pieces were neatly stacked in pyramid fashion like some sort of giant jigsaw puzzle.

While following the stretch of wall on the south side I spotted a lone water buffalo, lazily sunning itself near the moat. Not far away were its handlers; two young boys that had decided it was a good time for a dip in the water. They took no notice of my presence and continued their swim and fascination with some lily pads until I walked to the edge of the water and greeted them. Asking in broken Khmer if I could take their photo, they grinned and shrugged their shoulders as if to say: "sure, go ahead and click away!"

Each time I came to one of the 'back door' entrances to Angkor Wat, I would climb a set of old stone steps (they have newly constructed wooden ones at the main entrance to help handle the increasingly large flow of tourists) and explore the decorative facades and doorways. I was continually amazed to see beautiful examples of Khmer architecture and carvings everywhere, much of it still intact after hundreds of years. After seeing so many headless Buddha figures and defaced carvings around the various Angkor temples, you become desensitized to the destruction and expect that every temple you visit will have been raped and stripped clean by treasure hunting vandals by the time you visit.

At some point, naturally, my solitary stroll was destined to end. Before finishing the last leg of the wall, I went and entered Angkor Wat from the north gate. Dodging flocks of dazed tourists, I stopped to admire some of the bas-reliefs that I'd seen on my previous visits, including the epic depiction of "The Churning of the Sea of Milk." I didn't linger too long, though. By now, it was after twelve and I was ready to refuel my body with a bottle or two of water and some lunch.

In taking this alternative approach to touring Angkor Wat, the mighty temple seemed less formidable and more 'down home' than it had felt on my initial visit. Part of that feeling could be that I was less intimidated by the temple's grandeur after having seen it from a different angle. Then again, maybe the lack of other tourists around gave it more of a serene, homey feel. I almost expected a family of friendly Cambodians to step out from behind one of the ornate stone pillars and beckon me inside for tea.

No matter how you happen to approach Angkor Wat - following a guided tour or sneaking in the back door - it's safe to say that it remains one of the truly awe inspiring architectural creations of our world.