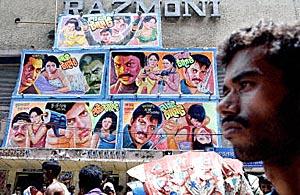 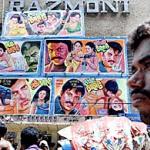 Popularly known as Dhaliwood, the once proud Bengali film industry churns out some 100 low-budget movies a year at an average cost of about 6.5 million taka (100,000 dollars) each.

But a growing trend toward obscenity has seen thousands of filmgoers desert domestically produced movies in favour of Hollywood.

"What we have is repetitive and vulgar with no ideas and smutty dialogue. Even bad Hollywood films are better. I like them a lot," said shop owner Mohammed Reajul Alam, 30.

Like other moviegoers in Dhaka, Alam once enjoyed going to see Bengali films but gave up in disgust several years ago.

"Bengali films have all become the same -- bulky actresses doing wild dances in skimpy clothes with stories of sibling rivalry, nasty politics or vendettas against hated rivals. It's depressing," he said.

For some cinema owners, only the growing popularity of Hollywood films -- especially among women -- helps them break even.

"We are showing films like 'The Matrix' and 'Bend it Like Beckham' because the quality of Bengali films is so bad that we can't make money from them," said Mozammel Hoque, who owns a Dhaka cinema hall.

"Before only men were coming so we were only getting half the audience. Now the women are coming back."

The number of Hollywood films shown in Bangladesh has been steadily rising over the past few years with dramas and action movies -- especially those with with good special effects -- proving most popular.

No overall figures are available but some movie hall owners say up to 20 percent of the films they show are made in Hollywood.

One of the main complaints among filmgoers is the practice of editing so-called "cut pieces", unrelated sex scenes from pornographic movies, into the film being shown.

"I prefer Hollywood films because if there is any sex scene it happens naturally as part of the story," said businessman Mohammad Robin.

"Bengali films add these vulgar scenes, which means we can't go see them with our families."

The film industry of Bangladesh, formerly East Pakistan, got its start in the 1950s with the establishment of a national film development corporation.

Regular production began in 1959 with some 20 films produced annually during the 1960s, rising to around 100 each year in the early 1990s, when up to a million people a year were attending movies in 1,500 cinemas across Bangladesh.

But industry figures say the increase in numbers was not accompanied by a corresponding rise in quality, leading many filmgoers in the mid-90s to start turning instead to movie channels on satellite television.

Some producers, in turn, faced with the loss of large sections of their audience, tried to reverse the decline by making films even more obscene.

"A lot of the films produced in the 1990s were poor quality copies of Western or Bollywood films with a lot of vulgarity so men couldn't take their families to seem them," said Sajjad Zahir, chief editor at the state-owned Bangladesh Film Development Corporation.

"So when satellite television came in the mid-1990s people started to watch the original Hollywood films. They could watch them in their market or community centre with their friends and family which they found was a much better environment than the cinema halls."

Zahir estimates only about 10 percent of Dhaliwood's output could be described as good quality.

Last year, frustration about low standards and plummeting audiences sparked separate demonstrations by groups of producers, and actors and directors, each blaming the other for the state of the industry.

"The censor board takes action against films with 'cut pieces' when it hears about them," said Zahir. "But there are only three or four inspectors for a country of 130 million people so what they can do is limited."

Veteran film producer and distributor Iftekharul Alam argues the only way to revive Dhaliwood is to allow more competition, particularly from Bollywood.

There are no restrictions on importing English language films but a government ban applies to Hindi films from Bollywood and also Urdu films -- to protect the local industry.

"There has been no competition and creativity has been stifled," said Alam.

"Producers have basically known that whatever rubbish they produced the people would have to watch and that is why we have the situation we have today."

In the meantime, Hollywood looks likely to continue gaining ground.

"They have a coherent start and end and even though I don't understand the conversations I find them very entertaining."