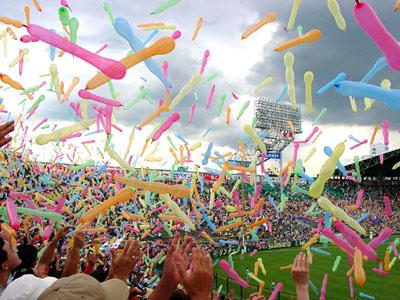 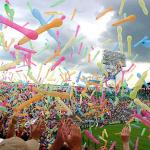 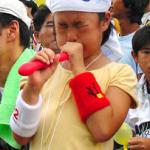 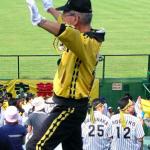 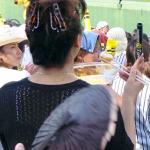 I went to my first Japanese baseball game on September 12. I saw the Hanshien Tigers play the Nagoya Dragons. In Japan the teams take on the names of companies, a step further than we are willing to go in the US where maybe the stadium is named after a company.

Can you imagine the Nabisco Yankees or the Gillette Braves? (You might have some fun thinking up which company name would go with which team) I enjoyed myself not so much because the playing was great or the game exciting, but because it was fun watching the people and seeing the differences between how the different countries play the game.

In my opinion, baseball is a boring sport. It's a mystery to me how some people get infected with the baseball virus that makes them passionate about the game. Many Japanese are infected.

Maybe it is its very slowness and dullness that appeals to the overworked Japanese businessman. It gives them a chance to relax and do nothing and maybe even snooze a bit. On weekends they like nothing better than to sit in front of a tv and watch their favorite team do battle. If the team wins they are happy and they will take the family out for dinner to a nice restaurant. If they lose, they are irritable.

I take a more spiritual view of the game. To me it is the game that most imitates real life. It's mostly boring and waiting around. However there are a few intense moments and these you have to be ready for. I look upon going to a baseball game as a sort of zen exercise. You have to maintain your alertness throughout the game and be ready for those magic moments.

It's a little strange to go to a baseball game and see people eating sushi and noodles with chopsticks. However I felt right at home when I saw the beer and the ice cream vendors. As incredible as it seems there were perhaps 2 or 3 times as many vendors at American games. They were like little ants crawling over a carcass.

The play that I saw was to be sure a notch below what we have in the US. The fielding was rather poor and there were many balls that weren't fielded cleanly. There were many double play opportunities but only one was executed to end the game.

Players throw the ball in I way that I used to describe when I was a child as "like a girl". Now that I am more experienced and sensitive I can change that. The girls that I knew back then threw the balls like Japanese professional baseball players. At the end of the throw they push the ball rather than snap their elbow down. The pitching speeds were much slower. Like in the US they track the speeds and post them on the scoreboards. They ranged from 115 to 148 kilometers per hour. I'll leave it to you to figure it out but it was slower than what we are used to.

However whatever deficiencies the Japanese players have is more than made up for by the exuberance and energy of the fans. They would put any high school football crowd to shame. In examining the behavior of the fans you can see some clues as to differences between the nature of Japanese and American people.

I bought the cheapest tickets I could possibly get ($17) partly because I am a cheap person and partly because I was told that the bleachers is where the action is. It was the only part of the stadium that was crowded (the Tigers are in last place).

Without realizing it, by buying a ticket in the bleachers I had become part of a group. Or a section and a group to be exact. Each little section of say 100 fans or so had a leader with a yellow shirt and a whistle. All of these section leaders took cues from the group leader who stood at the bottom of the bleachers and led the fans in cheers.

The cheers were, unbelievably, non-stop. As long as the Tigers were at bat, there was some cheer going on. As the opposing pitcher got ready to throw the ball, they would abruptly stop so that the batter could concentrate on the pitch. Then they would immediately start up again. There were many many different cheers, some were songs, some chants.

Usually the Group Leader's assistant (a very important job) would hold up some cards with the chant words. My favorite was a Japanese Spelling of "LET'S GO YAMAMOTO" or whoever. It came across badly slurred but it was one of the few things I understood.

The fans are well armed with baseball paraphernalia. The Japanese are really into flags and there were a number of men waving tremendous flags. One of them was made up of about 40 American flags for a reason that no one could explain to me.

Many of the fans were armed with loud noise making devices of various kinds like hollow plastic bats that can be beat together to make a loud bang. There were also a surprising number of trumpets blaring away. By the end of the 5th inning my head started to pound away in time to the incessant racket. I commented to my Japanese friend that I understood why people would pay up to $80 to sit in the non-bleacher seats, "They were quiet."

But the best part was what happened when the home team scored a run. Everyone would yell "Bonzai" and turn around and shake hands with their neighbors. I became particularly popular at this time. People seemed especially happy to come over and shake my hand, pat me on the back or give me the high five. We had a lot of opportunities to do this as the Tigers amazingly won 8 to 0 that day.

They have an interesting and fun twist on the 7th inning stretch. At the start of the 7th inning people started to pull out these big balloons. They have a valve on the end so the air will come out slowly. As the third out of the top of the 7th approaches, these balloons start sprouting like strange flowers from the crowd. Then just as the third out occurs, they are all released in a frenzy of color and motion. A cadre of young men who marched out onto the field in front of the outfield fence snatches them up in seconds and the game goes on.

We stayed until the bitter end and then dashed off because my friend had to get home to her family. Everyone else stayed glued to their seats because they were interviewing the winning pitcher and showing it on the big screen scoreboard. Just like in the US the players are worshipped.

I don't think I'll go to another Japanese baseball game, but I would like to see a Sumo Wrestling match. I'll let you know what that is like if I ever make it.