Bombay: Turmoil and a Heart-Shaped Balloon 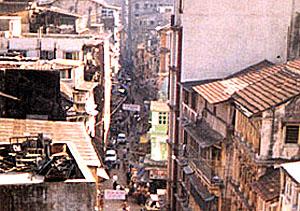 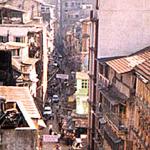 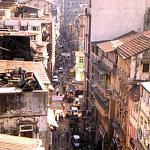 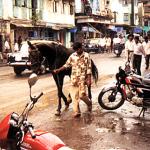 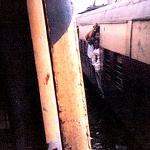 Far from Bombay is the hill station of Dalhousie, located in Himachal Pradesh. Dalhousie is peaceful, slow-paced, its residents genial. There, my travelling companion and I met an Indian padri named Caleb. His accent was British, as was his home: drawing room, diverse English garden, walls of books. We retired for tea. Caleb pensively discussed the history of Dalhousie. Time seemed to stop. The draft of chill Himalayan air was often the only utterance.

When Caleb learned that we lived in Bombay, his eyes widened slightly. A sour expression came to his face. He looked askance, sipping his tea. At last he said, "Bombay is...rather in a state of turmoil, isn't it?"

Though it is formally restricted to a peninsula as diminutive as Manhattan, Bombay is simply massive. Western cities tend to rise; Bombay grows more dense. Everywhere sprout more shanties, rundown colorful corridors, turns and fly-overs, chowks and bridges. The growth is disorderly and immense. In Bombay it is impossible to have been everywhere.

Estimates of Bombay's population are a matter of popular legend; they range anywhere from 12 million to 20 million. Estimates of its population growth are equally legendary. Some say 6000 people move into Bombay every day; some say 6000 families. Bombay's Dharavi is the largest slum in Asia; it renders any census absurd. People exude from the city's cracks; it drowns in people. "Bombay," writes V.S. Naipaul in the first sentence of his India: A Million Mutinies Now, "is a crowd."

But Bombay differs from many major cities, in that more than half of this crowd is homeless. Those living in slums or "dilapidated conditions" brings the figure up to 68%, according to Jeremy Seabrook's In the Cities of the South. In 1976, over four million people lived in slums; 700,000 lived on the pavement. People make even parks their home.

One such was Kamla Nehru Park, a children's playland in the posh residential area of Malabar Hill. The slope leading to Chowpatty Beach was home to a small community of street- and stair-sleepers. Walking up the slope was like walking through somebody's living room: one tried to walk softly up the cracked stairs where people slept under a soiled sheet, or within the clothes on their backs.

When rain came unexpectedly in December, long after the monsoon had ended, this open-air community became a proper slum. The bamboo frames appeared first, lining the whole of a gravel pathway. Within a few days, the frames had been draped with plastic and metal, spare wood and rocks.

The Bombay homeless are not easily ignored. They sleep at doorsteps, like that of the school where I taught. My hurried walk over the shattered sidewalk to school acted as an alarm clock to sleepers in the crevices of unopened shops. I often had to step over and around them. Girls slept on the medians of thoroughfares; their mothers rocked cradles made from two sticks and a taut cloth.

The unchecked growth in population is a grave concern. One Indian colleague of mine cited it as the source of all of India's problems. My students shared their classrooms with fifty other students. Recent estimates of Bombay's population density reach the incomprehensible figure of 17,676 per square kilometer, compared to 1,200 of London (Seabrook, 49). The Times of India regularly reported transport vehicles backing or barreling over a lone child, or rows of sleeping citizens. Taxis plowed into tea-couriers, cows.

The people are coming for many reasons. Many came from Pakistan to avoid religious persecution. Others have been displaced from their villages by changes wrought by dam projects (see Arundhati Roy's tract The Cost of Living) and other, often foreign endeavors. My students traced their roots largely to Gujurat, the state adjacent Bombay's Maharashtra to the north. They filled their journals with fond recollections of visits to their villages, amidst recurring condemnations of Bombay's pollution and overpopulation.

But one cannot dwell merely on Bombay's squalor - this is only half of its "turmoil". The authors of dry, academic studies of Bombay often seem to have spent precious little time there. For they failed to describe the preponderance of smiles and play found even in the endless string of slums lining the Harbor Line train.

To judge a city's well being on the basis of a collection of statistics is a mistake, but a fairly common one. Bombay is poor in wealth, but rich in other things. Emphasizing them, however, opens one up to accusations of callousness. A reporter looking for smiles may only be trying to ignore misery, and escape from guilt.

At most any street corner, there are beggars or vendors: old lepers; the boil-stricken; sooty and toothless children walking barefoot; mothers with babe in tow; blind men bringing hand to mouth in a fluid, almost devotional motion; peddlers of everything from dust rags to Forbes magazine to children's toys.

At Kemps' Corner, the beggars were often children. In the days preceding Independence Day, 1997, they sold paper tricolor flags for Rs.2 (about US$.05). They weaved through the stopped cars with their bundles, or sat under the fly-over with their families, perhaps in front of a steel pot of rice and dal.

A few months later, I had just returned from dinner at a Chinese restaurant when I spotted two girls sitting and standing on the median of Napean Sea Road. They held bundles of fat, heart-shaped balloons, colored red and yellow. Valentine's Day was months ahead; these chubby symbols of irrepressible love seemed grossly incongruous amidst the cement structures and the tangible, toxic fumes of Kemps' Corner. Yet they single-handedly illuminated the paradox of Bombay.

I approached the girls from behind. They had come to sit on the median. As I came close, one of them heard my footsteps. Simultaneously, she spun around and leaped up, doing so with such esprit that she nearly drubbed me with her balloons. A wide, toothy, effulgent smile flew out of her. She offered me a yellow; I chose a red. I pressed a 5-rupee note in her hand and took the balloon, discovering that it had been printed with the dark red outline of an arrow-pierced heart and the words "I Love You".

Indians, said a colleague of mine, like to "eat, sing, and dance." She implied that they only tolerated everything else. To walk around Bombay is to be the unprepared recipient of eating, singing, and dancing. Food literally spills out into the streets, and the smell of its cooking is never far. Singing blasts out of the taxi's stereo systems or the hawkers' speakers. The shrill sopranos sing the likes of "Dil To Pagal Hai" ("The heart is crazy indeed"), while my students huddle in groups in spontaneous song. They dance without cause. Bombay exists for reasons incommensurate with those of a Western city. It is anything but neutral. Its excesses of pollution and population are as baffling as its excesses of color and joie de vivre. More baffling still is their coexistence. I came to Bombay with expectations of misery and despair; returning to America, I found it the more miserable and desperate.