Book Review: The Sailor Who Fell from Grace with the Sea by Yukio Mishima 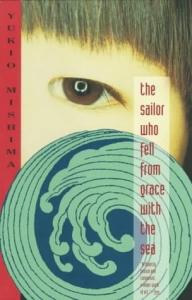 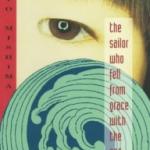 Set against the backdrop of Post World War II Japan, on the shores of the Yokohama Harbor, Yukio Mishima's now classic work, The Sailor Who Fell from Grace with the Sea, is a study in contrast: summer and winter, land and sea, companionship and isolation, wanderlust and domestication, glory and nihilism. In this disturbing yet compelling novel, Mishima examines the futility of the human condition through the shifting perspective of the story's three main characters: Ryuji Tsukazaki, a merchant marine; the widow Fusako Kuroda, an importer of European finery; and her misfit son Noboru, a boy poised on the tenuous cusp between childhood and adolescence.

When we first meet young Noboru, he is being locked in his room by his mother to prevent him from slipping out during the night to meet with a clandestine fraternity of classmates who seek to understand the intrinsic order of the universe through the deconstruction of the status quo. Known to the group only as "number three," Noboru is one of six boys who kowtow to the arrogant tyranny of "the chief," a precocious but spoiled young man, left far too often to his own devices by his wealthy parents.

The chief is the incarnation of the old axiom "A little knowledge is a dangerous thing." He holds court after school each afternoon, setting himself up as both judge and jury of human nature, and the world at large, for the tutelage of his intimate circle of sycophants. His contempt for mundane platitudes and mindless complacency drives him to extremes at times; to the point, even, of excising the heart of a poor kitten whose only crime was allowing itself to be ensnared by the boys for their dark purposes.

However, when free from the clutches of the chief, Noboru exhibits the characteristics of any typical adolescent: sexual curiosity, the seeds of independence, occasional sullenness, and a boyish fascination with all things mechanical, especially ships. When the freighter Rakuyo pulls into Yokohama Harbor, it is Noboru's excitement that leads to a tour of the ship and the serendipitous meeting of his mother and the sailor. Contrary to conservative Japanese standards of proper conduct in the 1940's and 50's, yet in keeping with the libertine sexual mores of the 60's when the book was written, Fusako sleeps with Tsukazaki on the first date, and romance ensues.

At first, Noboru is enamored of the seafaring vagabond, whom he believes to embody a certain rakish purity. But when Tsukazaki commits the unthinkable felony of falling for his mother, a price must be paid. Predictably, it is the chief who decides a punishment befitting a sailor who has fallen from grace with the sea.

Although much of it may be owed to John Nathan's translation, Mishima's theme of contrast is carried out not only in the elements of the story, but in his writing style as well. Stark, Hemingway-esque paragraphs are juxtaposed with elaborate and richly prosaic passages, especially in his euphemistic descriptions of sexual encounters between Fusako and Tsukazaki, and in his lurid account of the boys' evisceration of the kitten.

With very few strokes of his pen (as all of his manuscripts were composed by hand with traditional Japanese brush-stroke writing), Mishima creates characters of depth and complexity: Noboru struggles with his desire to belong; Fusako fears compromising her independence; and Tsukazaki, adrift somewhere between shore and sea, grapples with the realization that he may never find great glory sailing the ocean blue, nor true peace on terra firma. Which gives rise to the book's Japanese title, Gogo no Eiko, a double entendre that may be interpreted literally as "Afternoon's Tow," in reference to a tugboat leading ships in and out of the harbor, but also as "Afternoon's Glory."

As in his other works, much of Mishima's own life is bound up in his tale of The Sailor Who Fell from Grace with the Sea. Born Kimitaka Hiraoka, the son of a government official in Tokyo, he changed his name to Yukio Mishima to conceal his published writing from his father. His Japanese nom de plume means "mysterious devil bewitched with death." Not unlike his literary counterparts, young Noboru and the chief, Mishima spent much of his youth under the hawkish scrutiny of his grandmother, while dreaming of a world in which Japan was restored to its original power and glory. Mishima was denied admission into military service, where he might have distinguished himself in battle, and instead, spent the war years working in the ignoble obscurity of a factory.

In his adult life, Mishima held himself to impossibly high standards of physical condition and codes of behavior. He went on to found the Shield Society, a youth organization dedicated to Bushido, the samurai code of honor. And finally, on November 25, 1970, Mishima attempted to commandeer military headquarters in Tokyo in hopes of stirring the nation to a renascence of its former nationalism and military might. Failing this, Mishima immediately committed seppuku with his own sword on the building's main balcony.

Yet despite Mishima's fanatical patriotism, he was fluent in English and made numerous trips to the United States, where his works received praise and respect from western readers. In 1976, just six years after his death, The Sailor Who Fell from Grace with the Sea was adapted for the screen by director Lewis John Carlino. The film is a remarkably faithful rendition of Mishima's original novel, with the ironic exception that Carlino's version is set on the coast of England, with Kris Kristofferson, Sarah Miles, and Jonathan Kahn cast in the roles of the original Japanese characters. Oddly enough, it works.

Although now somewhat obscure, the movie is still available at a few rare video rental shops, and may also be purchased on Internet auction sites such as eBay. The movie is well worth the 105 minutes it takes to watch it, and Yukio Mishima's novel stands as one of Japan's many unique and invaluable contributions to the world of literature.