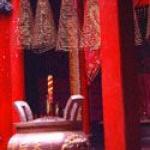 Independently produced documentaries have a long and distinguished history, and like most videos of this type, Burning Incense (1994) was a collaborative effort. Nora Taylor, who holds a Ph.D. in Vietnamese art history, headed the project's international production team. Several talented Vietnamese joined Taylor in this undertaking, including cinematographer Mac Van Chung, painter/art historian Bui Hoai Mai and composer Le Yen. The French Embassy in Hanoi generously loaned the video gear for the project.

Burning Incense shows how art has always been an integral part of Vietnamese life. Taylor defines "art" not just as paintings and sculpture; she defines it as anything that has a beauty of its own, from the natural landscape to paintings in the national museums of Hanoi. The main point of her documentary is that understanding and appreciating this art is essential for comprehending the country and culture.

Much of Burning Incense (titled Huong in Vietnamese) focuses on the beauty of the countryside surrounding Hanoi. Taylor, who narrates the film, portrays the agrarian landscape as the bedrock of Vietnamese culture, and hence their art. She points out that Vietnamese painters have long sought to duplicate the magic of their native landscape. What she does not say is that the video itself seeks the same artistic goal, and achieves it brilliantly with beautifully shot footage of terraced rice fields, the mossy green stones of a village well, graceful old farm houses and simple family altars.

This video also explores the startling beauty of pagodas. Artistic creativity and spirituality combine in them, just as art intertwines with traditional village life. As Taylor speaks of the serenity of temples, the video depicts intricately carved wooden Buddha's, quiet courtyards and religious ceremonies. Burning incense smolders in abundance, from the smallest sliver of sawdust and clove to the giant coiled joss sticks that resemble colossal bedsprings.

The tape concludes in Hanoi where the production crew had permission to film in various national galleries and museums. For example, the camera lingers on a well-known painting by Phan Ke An, which depicts a column of soldiers cresting a grassy ridge high in the mountains of Tay Bac. In a Hanoi studio Taylor introduces viewers to the intricate process of lacquerware, one of Vietnam's most esteemed artistic traditions. And throughout the city Taylor's film crew relentlessly seeks out the video's namesake. They find burning incense everywhere--in parks, on household altars, and even in offices full of brand-new personal computers.

Overlaying this artistic tour of the Hanoi area is a wonderful soundtrack composed by octogenarian Le Yen. Under his guidance his students improvised a live score for the video as they watched it on a VCR. The resultant musical compilation showcases a wide variety of Vietnamese musical traditions. In a sense, Burning Incense is a music video in which Vietnam itself is the star.

The video leaves one with the impression that Vietnam is art, and art is Vietnam--there can be no finer premise for a documentary. More importantly, the video itself is a creative production. From its romanticized images of bucolic rural life to its varied and original music, Burning Incense is truly a work of art.