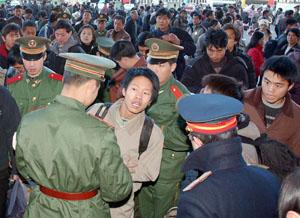 Travellers wait at Beijing West Railway station in Beijing to catch their trains for the annual trip home to visit relatives in celebration of Chinese New Year. 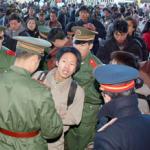 Beijing, Jan 19, 2003 - China's busiest travel period of the year has begun with transportation officials expecting hundreds of millions of people to visit relatives or go sightseeing in the coming days to celebrate Chinese New Year. The movement of people in the world's most populous country of 1.3 billion people is believed to be one of the biggest, if not the biggest, in the world.

Friday marked the beginning of the travel period for the Spring Festival, or Lunar New Year, which will end on February 25. During this period, people travelling to visit family or sightseeing and returning will make a total of 1.82 billion trips, according to estimates by the State Economic and Trade Commission reported by the People's Daily website. The figure is up 3.7 percent from last year, the report said.

Spring Festival, which begins on February 1 this year, is regarded as the most important holiday for Chinese people and is a time when people make every effort to have a reunion with their families. For the nearly 100 million migrant workers in China's cities, it means returning home to the countryside, often to see children left behind for most of the year in the care of elderly parents. Others also use the occasion to visit extended family in distant cities.

College students returning home also will make up a large portion of travellers. Still others, such as the growing population of middle-class people, will travel not just for family visits, but for fun, hitting popular tourists destinations such as tropical Hainan island in southern China, or countries which have made entry easy for Chinese travellers. During this 40-day peak travel period, many people will also make multiple short trips, such as Beijingers going to the outskirts of the city.

Buses will be by far the most popular means of transportation, with passengers expected to take 1.66 billion bus trips, according to the ministry of communications. An estimated 130 million people will travel by train during this time, averaging 3.25 million passengers per day, sources with the ministry of railways said. That is 1.66 million persons more than during the same period last year, said Hu Yadong, director of the transport bureau of the railway ministry.

China's waterways are meanwhile expecting to transport 24 million passengers. In addition, the more well-to-do will be flying, with the Civil Aviation Administration of China (CAAC) predicting a total of 8.7 million passengers will travel by plane during this period, up four percent year-on-year. The huge number of people on the move is expected to stretch the nation's transportation resources to the limit.

Those in charge of the nation's railway, highways and airlines are making special effort to ensure "traffic" runs smoothly, officials said. The railway ministry plans to operate 210 additional trains. China's public security and traffic departments will step up security measures on the highways. The nation's top carrier Air China and nine other Chinese airlines have arranged 5,169 additional flights to meet the surge in demand.

Despite such measures, the country's transportation system is struggling to cope. Even trains for short-distance travel were bulging at the seams. Students riding the trains home from the northern cities of Datong and Holhot late last week put up with standing-room only, often bumping shoulders with other passengers. Many passengers could not get seats, and resorted to sitting on the floor of train compartments.