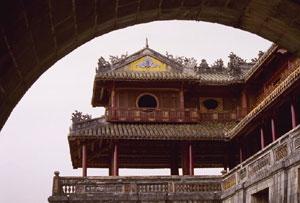 Under the gate to Hue's Imperial City 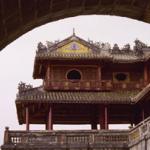 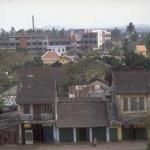 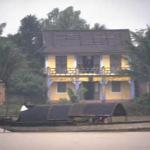 "Where are you heading?" I asked a couple of backpackers in Hanoi. "We're off to see Hugh", they replied. "Hugh? Hugh who?" "You know, 'Hugh', the old imperial capital of Vietnam", they insisted.

"Hugh?" I thought. Did they mean 'hue' as in 'color'? Or were they merely as ignorant as I was of the splendors of this exquisite city?

Hué, as it's really known, had its heyday as the capital of Vietnam in the first half of the nineteenth century. The Nguyen dynasty began in 1802 and lasted until 1945, despite the stripping of its powers by the French in 1883. The Nguyen Emperor Gia Long was the first to unite the whole of Vietnam, a feat that wasn't to be achieved again until 1975.

But, whether or not my backpacker friends were aware of the fact, it's the colors of Hué that startle and amaze the visitor.

Have you ever seen a street full of people in purple plastic raincoats? This color, usually reserved for cardinals and the "ultra-high" of the spectrum of humanity, has been appropriated by Hué as its civic theme-tint. The lowliest of houses are painted in subtle shades ranging from light purple to mauve.

Two other colors can widely be seen in this gracious city: the red-vermilion shades of old villas and school buildings, and the all-pervasive yellow ochre that colors the formerly French buildings and some Chinese temples. Occasionally you will also spot a light turquoise or sky-blue trim around verandahs and eaves, and the royal blue of the intricate carpets of Hué. Is it any wonder then that this city has been called "a color designer's dream" and "a masterpiece of urban construction"?

A brochure put out by the Hué Province Tourism Association (Cong Ty Du Lich Thua Thien Hué) says, of the people of Hué: "Their taste of color is quite special and unique. They have their own 5-color palette" (the brochure doesn't say what these colors are). "... (but) in real life, the palette is changed in various ways: red, green, blue, grey, dark violet, eggplant violet, sky blue, moon white and grass green."

So it's not just casual visitors who are bowled over by the colors of Hué! As the name "Hué" means "harmony", its citizens have long been serenaded in song and poetry. It has been said that natives of this city are "born poets and philosophers - sentimental but witty, simple but proud, and gentle but courteous".

It was raining when I visited Hué - not surprising in a city that has been known to register nearly three meters of rainfall in a single month. During a break in the downpour, I stopped to look at a group of stately old maroon-red buildings set around a beautiful garden courtyard. I walked into the grounds, and was greeted by Thi Lé ("little tear-drop"), a teacher of English. Soft-spoken, gracious and with a sweet disposition, she explained that this was a school for the top achievers of Hué Province, who come here to study in such colorful and pleasant surroundings that you could be forgiven for thinking it's a foretaste of heaven.

By the time I'd reached the Imperial Citadel, you'd have thought that all the color would have been washed out of the city. But no -- here was a whole group of French tourists, all in purple plastic raincoats -- and above them, the yellow crenelations of the Palace beaming out in splendor.

The Emperor's throne-room stuns, with lacquer upon lacquer of brilliance, in shades of cobalt blue, antique red, light purple and jade green. You feel that the Emperor still graces this room with his presence'and he surely doesn't care whether it's raining outside or not.

That evening, I took a stroll along the Perfume River (Huong Giang). An otherworldly mist hung over the banks of this serene river, and I recalled a Vietnamese description of this river as "soft and slender, like silver-green silk glittering under the sun".