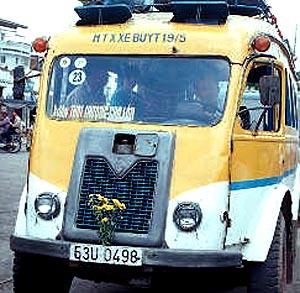 An old bus on the streets of Cholon, Vietnam. 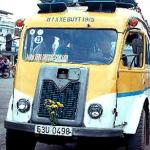 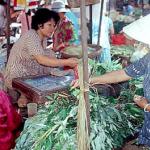 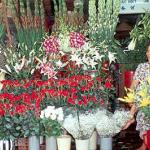 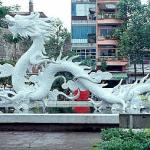 Even by Vietnamese standards, this place is CROWDED. On either side of the high-rise An Ðông Commercial Centre are higher-rise yellow-washed houses, their façades dripping the soot of decades of pollution and neglect. At the foot of the houses, fruit and flower stalls present a riot of colour, surrounded by traffic so dense that at peak hours a shoehorn could be a decided advantage.

And I'm still just on the outskirts of Cholon, Saigon's bustling Chinese quarter.

For centuries, Cholon has been a hive of commerce that has acted as a catalyst for the rest of southern Vietnam. When the British author Graham Greene spent some time here during the French colonial period in the early fifties, he described the open warfare between the French authorities and the Binh Xuyen clan, who at that time ran the legendary Grande Monde Hotel and the gambling halls of Cholon.

Today, the Grande Monde is long gone. However, the elegant Arc en Ciel Hotel still graces the skyline, its mauve and green façade an art deco masterpiece. Down the road, the Tam Son Hoi Qua Temple (one of many colourful Chinese temples scattered throughout Cholon) is where childless couples come to pray to Me Sanh, the Goddess of Fertility. The temple grounds also double as a parking plot for motorcycles, a juxtaposition that is strangely not inapposite.

Further along Ðuong Tran Hung Dao (Tran Hung Dao Street), a narrow alleyway houses one of Cholon's main vegetable markets. This place is the guts of Cholon, not to mention its taste-buds and nostrils. I walked the lanes of the market, surrounded by dozens of ladies (virtually all the stalls are manned, or should I say "personned" by middle-aged women), each offering twenty or more types of green vegetables, Vietnamese mints, lemongrass, and aromatic fresh herbs that mingle in a delightful olfactory offering.

The vegetable market runs between Ð. Tran Hung Dao and Ð. Nguyen Trai, two of Cholon's most important thoroughfares. Nguyen Trai is the domain of several well-run business hotels, and is becoming a centre also for multinational companies like Meyer Pharmaceutical.

Bob, from Sydney, lives in a high-rise Cholon apartment with his Vietnamese wife and two kids. "It's cheaper to rent here than in Pham Ngu Lao" (the main backpacker area), he says. "Rents here average around $US140 a month. I was paying twice that for worse lodgings in Pham Ngu Lao".

Heading east, I pass Cha Tam Church, which punctures the clouds like a spectacular spiritual skyscraper. It is here that ex-President Ngo Ðinh Diem holed up in 1963, after a coup that deposed his crooked regime (he eventually surrendered, only to be lynched by a revenge-hungry mob). As the streets get narrower, the hustle and bustle increases, though the chaos seems somehow mitigated by the splendid stands of trees that tower above the road, particularly in the long boulevard Tran Hung Dao. A further saving grace is White Dragon Park, a restful space with a large marble dragon rearing out of a lake.

Thap Mu?? Street is the very heart of the Chinese quarter. Red lanterns, brassware and incense are sold in shops that overflow onto the pavements. It's here that the traffic is most intense.

And then...I turn a corner, and the din subsides. Save for a couple of especially persistent postcard sellers, the space is quiet. Towering over a short side street is the imposing Binh Tay Market.

Binh Tay is no ordinary market. Aussies will compare it to a scaled-down version of the Queen Victoria Building, or a mini-Myer Emporium. To Americans, it could be Macy's, Asian-style. After the homeliness of the fruit and vegetable markets, Binh Dinh comes as a surprise, offering clothing, bags and haberdashery among the many goods on sale - other items ranging from fresh coffee to hardware, carpets and dinnerware. I only wished I had brought more money, or a "wish-list" from home.

Despite the noise and the seeming chaos, it seems that there's an underlying order to Cholon. Leaving the district, I pass the smiling statue of the Buddhist sage Chi-Thanh Tien-Su, who seems to be keeping watch over the precinct and its privileged occupants. And if Cholon's rising prosperity is anything to go by, then the Sage is doing his job very well indeed.

Getting There: Vietnam Airlines flies regularly between Ho Chi Minh City (Saigon) and Taipei (Taiwan), from where there are frequent connections (by several airlines) to Los Angeles.

Some tour operators run tours to Binh Tay Market. However, it's probably just as easy to take a taxi, motorbike or cyclo (pay 10,000-20,000 dong) to Cholon, and walk around to get the feel of the place.

Guide-books: The Lonely Planet guide to Vietnam has a useful section on Cholon.

Acknowledgments: The author visited Vietnam as a guest of Vietnam Airlines and Travel Indochina.