A Day in the Life of Hang Bo Street 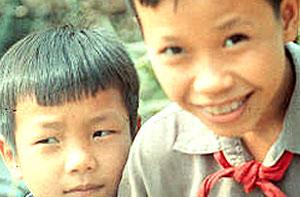 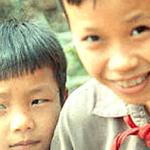 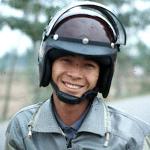 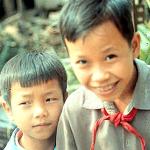 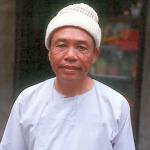 It could be any back street in Hanoi: graciously shaded, bustling with cycles and motorbikes, and like the ever-changing sets in a long-running stage-play.

Pho Hang Bo (Hang Bo Street) is a typical side street in the Old Quarter of Hanoi city, shaded by trees that nearly plait their tops across the road. With layer-upon-layer of life filling out its spaces and stretching out the day, it's a good place to study "life-in-miniature".

Hang Bo is just one of the 36 "guild" streets among the many streets making up the Old Quarter. In former times, each street was named for the major commodity produced in the street. Thus Hang Thiec (Tin Goods Street) produced tinwares; Hang Ngang (Silk Street) was the centre of the finished silk trade; and Hang Non (Conical Hat Street) was peopled by makers of the palm-leaf hats that have become a Vietnamese hallmark. Today, the names are the same but the goods produced have changed a little; for example, Hang Thiec's main product nowadays is galvanised iron tanks for producing bia hoi, a rustic draft beer.

Hanoi, which will be celebrating its thousandth birthday in the year 2010, is often touted as "the Paris of Asia". This is an apt description for a city that many have described as amongst the most beautiful in the world. What the visitor DOESN'T expect is that every street, down to the narrowest side alleys in the Old Quarter, is leafy, shaded and cool. At the same time, an eerie calm and quiet pervades the ether, as the silence between motorcycle roars is punctuated by bicycle bells that sound like the peal of a church carillon.

Traffic in Hanoi flows like water around rocks in a river. Sometimes it is little short of miraculous that there are so few accidents; it seems that an unseen "traffic warden in the sky" is keeping a watch over the trajectory of each and every bicycle and motorbike. On one occasion, I remember being overtaken by a pair of motorbikes, the riders still managing to keep up a conversation as they passed on either side.

Getting your bearings in Hanoi is not too difficult. Lying along the left bank of the Hong River, the city's landscape is delineated by a number of lakes. The focal point of the city is the urban oasis of H? Hoàn Ki?m (Lake Hoan Kiem).

Hoan Kiem ("Restored Sword") lies just south of the Old Quarter which includes Hang Bo Street. A natural lake, it's named after a 15th century incident in which a golden turtle is said to have risen out of the Lake and snatched a charmed sword from the Emperor's hands. This, the story goes, is the very same sword used to gain victory over the Ming Chinese, who at the time were invading Vietnam.

But what does this story mean? Maybe it tells us that victory has its limits: when the battle has been won, it's time to lay down arms and get on with the job of living. This could be a theme for the modern Vietnam.

The name Hang Bo means "street of bamboo baskets", as this used to be the craft specialty of the street. Today, Hang Bo Street is more of a "multi-purpose" street, whereas the shady cross-street Thuoc Bac is still predominantly the domain of locksmiths. Deeper in the Old Quarter, you find streets in which all the shops still: specialise in one commodity: rolls of copper wire, or embroidery, or tiles and plumbing fixtures- there's even a street where all the shops sell nothing but motorbike seats. Then there is the famous Cha Ca (Grilled Fish Street), named after a restaurant that has been preparing this delicacy for more than a hundred years.

Hang Bo Street is now experiencing rapid development, and with limited space in the Old Quarter, the only way to build is up. No matter how narrow a building, it seems that there is always room for just one more storey. The result is a teetering structure like a tin-roofed tower of Babel, which threatens at any moment to careen down onto the street below.

Early morning, the pavements of Hang Bo Street spring to life. Hanoi is not Calcutta, and the people don't need to sleep on the streets; but for the rest of the day life is lived to the full upon its pavements and byways.

Well before daybreak, the rubbish that accumulates on the street has all been swept into little heaps, and then carted away. By dawn, the street is as clean as a Swiss whistle. Householders set up little electric motors to draw water from the wells beside the kerb.

This activity soon gives way to breakfast stalls, selling fresh French rolls, noodle soup and strong filter coffee. Everyone sits down to eat, even fully-grown adults perched on little stools that look like kindergarten chairs. Westerners need time to adjust to this toytown furniture - it calls for anatomical contortions that a non-yogi may find difficult. Later in the morning, traffic intensifies. Elegantly-clothed ladies and immaculately dressed businessmen ride past on their Honda "Dream Machines".

By mid-morning, life throbs with an intensity that surprises even those used to experiencing a city that wears its guts exposed for all to see. Cycles, cyclos (trishaws) and motorbikes go past, many laden to breaking point. Here's a cyclo groaning under the weight of cans of "pork liver paste". Another carries flowers, and yet another, graceful women out shopping.

Looking out onto Hang Bo Street, a team of jewellers beaver away in sweatshop conditions, behind a flimsy screen. Next door, a shop-front dentist plies his trade: presumably the dentist with the fewest screams gets all the custom. Across the road, a shop selling "ice-cream, yaourt, cakes" is flanked on both sides by tailors. Just down the street, an "informatics application centre" teaches word processing, using Vietnamese language keyboards, and Microsoft Word with "VNTimes" font.

With the growth of tourism in Vietnam, the face of Hang Bo Street is now changing. Five years ago, there were few tourist facilities in this precinct, but now Internet cafés and hotels are springing up faster than mushrooms after rain. Some of the former mini-factories are now being replaced by brand-new hotels, with the Espacen, Fortuan and My Lan hotels all constructed since 1999.

By lunch-time, Hang Bo Street is ready to take a break. Look for the sign com, which means "rice". Ask for this, and you get a plate of rice and a number of other dishes from which you can take your pick. Stick to the popular eating places, and the food is fine. But if you see a place with a sign like "food for tourists", avoid it like the plague! Unsuspecting diners will be treated to an almost inedible ersatz version of what the Vietnamese consider to be "Western" food.

After lunch, the residents of Hang Bo Street linger a while over cups of green tea. Then it's back to business, or the thousand other activities that grace the pavement. Late in the afternoon, the elderly gentlemen of the street don berets, or suits and ties, and wander down to Lake Hoan Kiem. Here they sit and smoke and talk, or play mah-jongg, or just watch the passing parade.

Come nightfall, the people of Hang Bo Street still use the pavements as a sitting room, dining room and kitchen combined. Dinner is taken early, but this is by no means the signal to end the day. Kids bring out their schoolbooks and do their homework under the street-lamps. Commerce goes on until well into the night, with most shops staying open until around 10 pm.

Even after midnight there's activity in Hang Bo Street. Only in the wee hours of the morning does the street get a little quieter. But not for long: the daily round is soon to resume. This is Hanoi, where getting on with life is an art form.

A British MP who recently visited Hanoi bemoaned the changes now occurring to the city, where high-rise hotels are sprouting like mushrooms after rain. He says that "like all converts (to the free market in this case), Vietnam has gone from one extreme to another".

But it seems the Vietnamese are smart enough to know where to stop. The powers that be know that the city is in need of modern infrastructure, but they are also acutely aware of the need to conserve Hanoi's unique architectural heritage. Like the wise tortoise that reared out of Lake Hoan Kiem, the authorities will surely one day say "so far, and no further". If this is indeed so, then Hanoi's best days are yet to come.

Hanoi, formerly with a dearth of good accommodations, is now undergoing a hotel boom. A range of hotels, from luxury to budget, is given here, with prices in $US:

Camellia Hotel, my favourite hotel in Hanoi, but you won't find it in any of the guide books: excellent and friendly service, 81 Thuoc Bac Street, tel 828 2376, fax 828 2404, $US15 including breakfast, for clean ensuite rooms with 9-channel satellite TV.

Van Mieu Temple of Literature, built in 1070, and still a potent symbol of the reverence that the Vietnamese attach to scholarship.