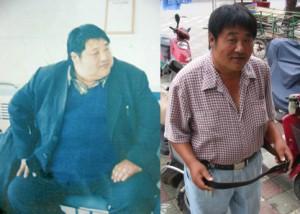 Ren Yueliang before (l) and after (r). 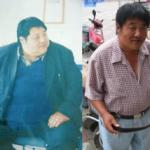 Hao Ligong is smiling, which is strange for a man with 15 needles sticking from his abdomen. Hao, a 33 year old bus driver from Hubei province, is a patient at the Cangzhuo branch of the Aimin Weight Reduction Hospital, and in addition to the 15 needles in his belly, there are a dozen others sticking from various points on his legs. Despite looking like a human pincushion, he has reason to be happy. Just two months ago, Hao weighed 100 kilograms. While not quite svelte, he's considerably trimmer at his current weight of 77 kilos. "My goal is to lose another 7 kilos" Hao says "then I'll be about right for a man of my height (176 CM)"

Mr. Hao is an outpatient at the hospital, and for the last two months, he's come in every other day for intensive 30 minute long acupuncture treatments. He pays 960 RMB a month, which covers the cost of acupuncture, a supply of traditional Chinese medicine and the support of the clinic's doctors and other patients. This is a considerable portion of his salary, but he has no regrets. "I really felt unhealthy before beginning this program." He says. "That's all changed now."

The Cangzhuo hospital is one of 22 Aimin Weight Reduction Hospitals in China using this method, a mix of old and new techniques designed to help obese people to lose weight, and more importantly, to keep it off. Acupuncture plays a big part of the program. For the purpose of weight loss, needles are inserted in various points of the ear lobe, a method that has been used to successfully treat various "crave-based maladies" from smoking to drug addiction. Outside of the hospital, patients stand chatting with one another, and in profile one can see small white tissue patches on various points on their earlobes, indicating that they've just come out of treatment.

But for the extremely obese, merely eliminating craving is not enough. Internal organs need to be stimulated, both to aid in digestion and to actually facilitate a change on a glandular level. For this, needles are used throughout the body, as in the case of Mr. Hao. This, combined with Chinese herbal medicine, change in diet and lifestyle, and old fashioned self-help seems to be helping some to win their own personal battles against obesity.

Opened in 1992, the first Aimin hospital is in Tianjin, about two hours out of Beijing. It's a large facility, with space enough to host 300 live-in patients and serve around three times as many outpatients who come in for regular treatments.

"Our hospital attracts patients from all over China, often the most extreme cases of obesity in the country." Says Li Ying, office manager of the flagship hospital. "We currently have four branches in Asia outside of China, and there are plans to expand into Europe and North America. We also have some English speaking doctors," she says, noting that the hospital has had around 100 foreign patients to date."

Li Ying offers some insight into the scope of China's obesity problem. "We don't have exact figures, such as what percentage of Chinese people are obese, or merely overweight. What we do know is that we see more, and more extreme, cases every year. The problem tends to be greater in the north than in the south, and more extreme in the wealthier parts of the country. Many of our patients here are teenagers who come from just about every corner of the country."

Still, it would be wrong to think of obesity as a problem that only occurs in major cities. About four hours south of Beijing, Cangzhuo is a small city by Chinese standards. Yet since it's opening just ten months ago, the Cangzhuo facility has treated around 1100 patients, nearly all from the local area. Dr. Sun Huaqing, the chief doctor of the facility feels that the numbers themselves speak volumes.

"Cangzhuo has under a million people, yet we have treated around 1100 patients in just ten months."

The problem, according to Dr. Sun, has much to do with diet and lifestyle. "Look at what people eat nowadays." She says "Junk loaded with fat and cholesterol. McDonalds, Kentucky Fried Chicken, stuff nobody in China ate twenty five years ago."

"Of course, lifestyle plays a crucial role in obesity." Dr. Sun adds "for these reasons, affecting a major change in thinking is a big component of the Aimin method. To conquer obesity, one needs to go through a profound change."

Hearing this, Ren Yueliang nods his head in agreement. At 186 CM, Ren is a big man. He has a kind face that seems incapable looking sad, with eyes projecting a mixture of happiness and relief. He weighs 110 kilos, which, combined with his height, gives him the sort of body that an American football coach might look at and think "you, me, and a weight room and we'll have a killer linebacker inside of two months." But few would think of Ren as "grotesquely obese." No airline ticketing agent would cough nervously and call a supervisor over to explain to Ren that he needs to buy two seats.

Not like they might have done less than a year ago, when he walked into the Cangzhuo clinic and weighed in (on a specially procured livestock scale) at 200 kilos.

"We saved the belt that Yueliang was wearing that day" says Doctor Sun, holding up a 1.7 meter strip of leather. Mr. Ren holds the belt up around his waist like a limp hula-hoop. He is now able to measure his belt size in centimeters - 90 of them - like most other people. Now an outpatient like Mr. Hao, Ren came to the clinic nearly nine months before and signed himself in for an intensive two month in-house program that included daily acupuncture treatments, diet, traditional Chinese medicine and a program of regular exercise.

But it's the final component of the program that would look most familiar to someone from the self-help happy west: group therapy. "Helping somebody to lose weight is comparatively easy" Says Dai Ruhai, manager of the Cangzhuo facility. "Getting them to change the lifestyle and appetites that contributed to their weight problem in the first place is more difficult. But keeping them on the right track after the weight's been lost?that is the real challenge. In this, we feel that the moral support of other patients is invaluable."

Mr. Dai understands the problem of obesity on more than a professional level. For one thing, he's Dr. Sun's husband. For another, he's not merely the manager of an Aimin hospital - he's also a former patient. "Do you see that?" He asks, pointing to a photograph of a flabby man with the beginnings of man-breasts sitting by the side of a swimming pool. "That is the only picture of me that I allowed to be taken from the time when I was fat."

Dai Ruhai is no longer the fat man with sausage thighs threatening to burst his lycra swimsuit. Indeed, he's trim, and healthy looking enough to act as spokesman for good living in general. For this he thanks both the Aimin program and his wife. "He was fat when I married him." says Dr. Sun. "At the time, I was still studying TCM and acupuncture as a method to effect weight-loss, and I could see the handsome man inside begging to be let out."

Dai Ruhai agrees with his wife. "Inside of every patient we see is a healthy person trapped inside of an obese body. Coming for treatment is the first step towards their release."