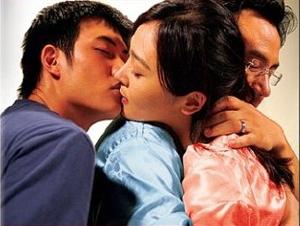 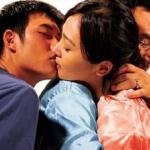 A moody and mysterious Korean film, 3-Iron follows Tae-suk, a fetching young man on a sporty silver motorcycle as he prowls the neighborhoods of Seoul each day in search of vacant lodgings for the night. To sleuth out his daily digs, he leaves flyers taped to the doors of each house or apartment, and when he returns later, the door with the flyer still intact is usually a dead giveaway that the residents are away for the night. But not always. As is the case at an upscale estate, where Sun-hwa, the lady of the house, is still hovering about, dreading the return of her abusive husband.

So miserable is she in her marriage, that even life with the artful dodger who invaded her household seems better than the hell of her daily existence. So she casts in her lot with him, straddles the jump seat, and off they go on his silver steed. Nevertheless, the only change in Tae-suk's routine is that he now has a partner in his victimless crimes. Once he and Sun-hwa have targeted a vacant residence, they gain entry to the premises with a sleek locksmith's kit, and once inside, help themselves to whatever's in the fridge, freshen up with whatever's in the bathroom, listen to music on the sound system, and browse through photo albums and personal belongings. Oddly, however, as an amusing reciprocal ritual, they scrub and tidy the kitchen, launder whatever's in the clothes hamper, and make small repairs on broken clocks and electronic equipment. They always leave the place better than they found it.

But regardless of how fastidious their comings and goings, they're bound to get caught eventually, and once they do, there's hell to pay for each of them, with Sun-hwa remanded into the hands of her hateful husband, and Tae-suk in solitary confinement serving out his sentence.

Written and directed by Ki-duk Kim of 'Spring, Summer, Fall, Winter... and Spring' renown, 3-Iron is an equally compelling drama with a lean script and a mystique that tiptoes its way to one of the most satisfying endings ever. I loved this film.

3-Iron is available on DVD at Amazon.com