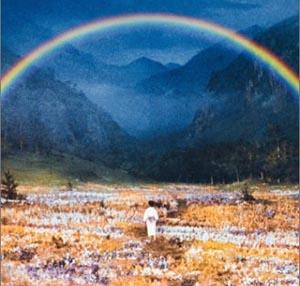 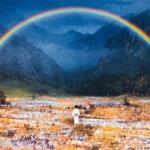 Follow Akira Kurosawa on a journey through his dreams, from early childhood, to visions of the apocalypse and beyond. In this series of eight vignettes, ranging from seven to twenty minutes each, and based upon actual dreams throughout his life, Kurosawa creates a mosaic of imagery and symbolism that, when viewed as a whole, forms a very clear picture with an important message for mankind.

The journey begins with Sunshine Through the Rain, in which a sudden rainstorm occurs in the mid-day sun, a phenomenon that, in Japanese lore and superstition, means that foxes are holding a wedding ceremony. A young Kurosawa is warned by his mother to stay indoors, lest he anger the foxes by observing their secret procession. Nonetheless, the boy wanders into the forest, and must suffer the consequences of his disobedience.

The next dream, The Peach Orchard, takes place on Girls' Day as Kurosawa's elder sister is celebrating Hina Matsuri, the Doll Festival, with her friends. In this celebration, which takes place in the spring when the peach trees are in blossom, girls display collections of dolls that represent Japanese royalty. The young Kurosawa notices that one of his sister's guests is absent, and when her apparition appears to him, he follows her into the garden, where the doll collection has come to life. They chastise him because his family has cut down the peach orchard, destroying the flowers that symbolize the celebration.

In the next segment titled The Blizzard, a group of mountain climbers struggle to find their camp in a heavy snowstorm. As they reach the point of exhaustion, the expedition leader urges them onward, but despite his harsh commands and insistent pleas, they cannot overcome the urge to succumb to the snow angel who lulls them sleep with her siren song.

Kurosawa's next nocturnal vision is of a military officer returning home from war. As he walks along a country road, he comes to a tunnel, where a dog snarls menacingly at him. When he reaches the other end, he hears footsteps approaching from behind, those of a young soldier named Noguchi, who died in his arms during battle. The ghost of the young man demands to know why he does not feel as if he's really dead, and within a few moments, the entire Third Platoon has assembled to ask the same question of him. The platoon commander confesses his despair over sending them to die in combat, and the guilt that torments his days as the sole survivor of the battle.

In perhaps the most fanciful of Kurosawa's Dreams, one titled Crows, a young man visits a gallery of Van Gogh paintings, and suddenly finds himself entering the landscape titled "Langlois Bridge at Arles with Women Washing". With special effects created by George Lucas, and Martin Scorsese in the role of Van Gogh himself, the young man follows the painter on a journey through his most famous landscapes.

The mood turns ominous in Fuji in Red, where that same sojourner now finds himself in the shadow of Mt. Fuji as it explodes in a nuclear firestorm caused by the meltdown of a power plant. People flee in panic, although they know there is no escape except by plunging into the sea. The last to go are a woman with two young children, and a corporate executive who claims responsibility for the catastrophe. He explains the radioactive element present in each different color of storm cloud, and their resulting physical after effects.

In a post-apocalyptic vision titled The Weeping Demon, our dream traveler hikes through a scorched wasteland, where he meets an oni, a horned demon who explains how the landscape was ravaged by nuclear fallout. The indigenous wildlife has suffered hideous mutation, dandelions now grow as big as trees, and the only sustenance for humans is to feed upon each other.

But the horror is over in Kurosawa's final dream, The Village of the Waterwheels, in which mankind has returned to the rustic ways, following the course of nature. Here, the traveler meets an old man who explains the workings of this simple lifestyle. And on this day in his dream, the village is honoring the passing of an elderly woman with a funeral in jubilant celebration of a life well lived.

In this prophetic fantasia, as in nocturnal dreams, time passes without notice, and music, both symphonic and traditional Japanese, is integral to the mood and tone of each vision. Each scenario is mindfully and impeccably crafted, imbued with meaning and metaphor. In a style reminiscent of The Illustrated Man, Akira Kurosawa's Dreams is a wake-up call to humanity, a sermon against the worship of technology and the destructive march of progress. Without being preachy, Kurosawa's Dreams presents with unmitigated clarity the two possible outcomes, one dark, one radiant, and makes crystal clear the message that the collective choice is ours.