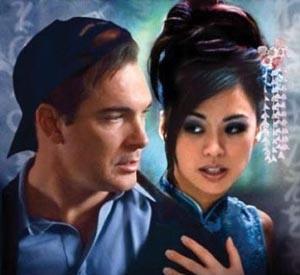 The Civilization of Maxwell Bright 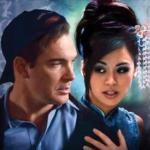 Meet Maxwell Bright: a successful home theater and big-screen TV dealer, fully frontally nude in the driveway outside his Los Angeles home as he chases after his also-naked girlfriend, hurling at her the most obscene, hair-raising, sexually derogatory insults ever captured on film. It seems that they've had yet another lovers' spat while engaged in sexual intercourse and, in the heat of the moment, have gone public with their little melodrama. A shovel upside his head gets his girlfriend hauled off in a squad car and leaves Maxwell Bright with a gaping wound, both literally and figuratively: He's through with American women.

While sitting around the poker table with his buddies a few days later, the notion of an Asian mail-order bride is introduced, and faster than you can say 'Eights over Aces', Maxwell Bright is off to the bride broker. But not just any bride broker. Mr. Wroth, a man of aristocratic refinement and infinitely discriminating taste, prides himself on hand-selecting a perfect match for each of his clients. Six weeks and a hundred thousand dollars later, Maxwell Bright answers a knock at his door to find Mai Ling, his beautiful Chinese wife-to-be.

Life is paradise for the first few days as Mai Ling satisfies his every sexual fantasy, waits on him hand and foot, and brings serenity and order to the once chaotic squalor of Maxwell Bright's bachelorhood. Paradise, that is, until Max, in a moment of swaggering indiscretion, orders Mai Ling to disrobe for his poker buddies. When she refuses, Max does the deed himself, humiliating his new bride in front of three gaping men, who are just as embarrassed as she is. In that instant, the honeymoon is over, and the following day, Mai Ling hauls Maxwell Bright back to the broker to air her grievances. In this pivotal scene, a secret is revealed about Mai Ling that will profoundly impact the life, and ultimately the death, of Maxwell Bright.

Patrick Warburton stars in the title role of this small-budget independent film, with a finely-crafted script and stellar performances by such familiar faces as Marie Matiko as Mai Ling, Simon Callow as Mr. Wroth, Eric Roberts as best friend Arliss, and cameos by Carol Kane, Nora Dunn, John Glover, and Jennifer Tilley. With a CV that lists only a handful of films, writer and director David Beaird really pushed the margins on this one to win awards at film festivals all over the world. Be forewarned that much of Act I contains abhorrent male chauvinism, and profanity so vulgar that will leave you gaping in dismay, but if you can ride it out, the film takes an unexpected turn in Act II, and concludes in a spiritual and loving way that will make it all worthwhile.