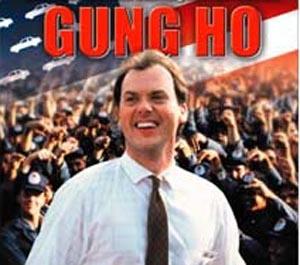 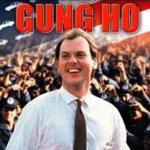 Local boy makes good in this East-meets-West comedy in which Michael Keaton plays Hunt Stevenson, an all-American guy who travels to Japan to convince Assan Motors to reopen the automobile factory in the town of Hadleyville, which has been in a steady state of economic decay since the plant stopped production and closed its doors. While in Japan, Hunt falls victim to the expected culture shock, especially when he finds himself up to his knees in a rice paddy, audio-visual equipment in tow, desperately seeking directions to Assan Motors for his meeting with a boardroom full of stone-faced corporate heads. And despite his bumbling etiquette and awkward attempts at humor throughout his presentation, his efforts to broker a deal are successful.

When the Hadleyville plant finally reopens a few weeks later, Hunt has been promoted to act as a liaison between the Japanese plant managers and his union brothers, as the two disparate teams try adapt to each other's work ethic. But tensions begin to rise in Hunt's pressure-cooker when his union brothers, who have been rehired at three-quarter pay with no contract, learn that Hunt has struck an all-or-nothing deal with the Japanese to build 15,000 cars by the end of the month, a near-impossible task even at maximum efficiency.

Throughout the film, Hunt has relied on tales from his glory days as the star quarterback of his high school football team, using anecdotes of his winning plays to inspire his union brothers to action and solidarity. But it's going to take a Hail Mary pass to pull this one off.

For a relatively obscure film, Gung Ho comes with quite a pedigree. It was directed by Ron Howard, best known for his childhood role as Opie Taylor on the Andy Griffith Show and his adolescent roles as Richie Cunningham in Happy Days, and as Steve Bolander in American Graffiti. Since his days of freckles and tousled strawberry hair, Ron Howard has come into his own as a director and producer of such noteworthy films as Cocoon, Apollo 13, A Beautiful Mind, The Da Vinci Code, and most recently, one of this year's Oscar nominees, Frost/Nixon.

Also to its credit, Gung Ho features the screenwriting of Lowell Ganz, whose credits include Multiplicity, City Slickers, A League of Their Own, and Mr. Saturday Night. And the original music was composed by Thomas Newman, who has won critical acclaim for his work on films such as Finding Nemo, Erin Brockovich, The Green Mile, American Beauty, Shawshank Redemption, Scent of a Woman, Fried Green Tomatoes, and Desperately Seeking Susan.

And who doesn't love Michael Keaton for his unforgettable roles in Multiplicity, Batman and Batman Returns, Pacific Heights, Beetle Juice, and Mr. Mom, to name only a few.

With Ron Howard, Lowell Ganz, Thomas Newman, Michael Keaton, and Gedde Watanabe, who have all crossed paths at one time or another in their cinematic careers in such productions as Happy Days, Parenthood, Splash, Night Shift, and Edtv, the film credits of Gung Ho also read like a close-knit version of the Kevin Bacon Game, who by the way, starred in Apollo 13 and Frost Nixon, which were both directed by Ron Howard. The film also features good supporting performances by Gedde Watanabe as the shamed junior executive who has been sent to Hadleyville to redeem himself, Mimi Rogers as Hunt Stevenson's girlfriend Audrey, John Turturro as his old high school buddy and co-worker, and especially George Wendt as the recalcitrant assembly-line scapegoat.

Gung Ho was filmed in Beaver, Pennsylvania, but in the film the town was called Hadleyville, which, by the way, was the name of the town in High Noon. A short-lived spin-off television comedy, also called Gung Ho, featured many of the actors from the movie. Originally titled Working Class Man, the film and its soundtrack, also titled Working Class Man features the musical talent of Stevie Ray Vaughan, and The Fabulous Thunderbirds.

Gung Ho is an endearing comedy that provides a glimpse into some of the subtleties of Japanese culture, especially with regard to the corporate world. And although it is guilty of certain cultural stereotypes, they're all in the spirit of good fun, and like many films made in the 80s, it is conspicuously dated but has held up remarkably well over time. Gung Ho is a sweet film with a lot of heart, and it has one of the best endings of any comedy ever made.